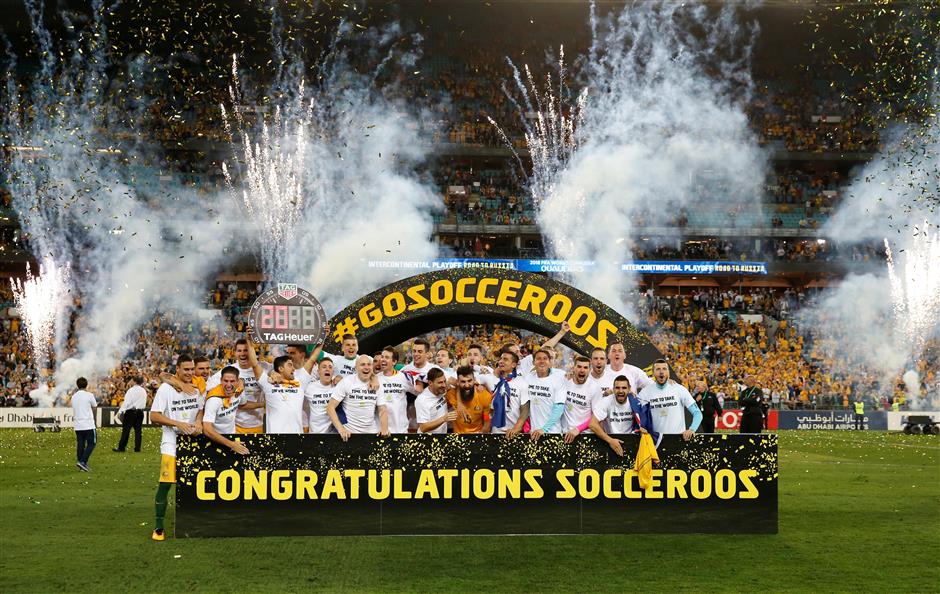 Australia players celebrate qualifying for the 2018 World Cup following a 3-1 win over Honduras in the second leg of their inter-confederation playoff at the ANZ Stadium in Sydney on November 15, 2017. The first leg in Honduras had ended goalless.

Captain Mile Jedinak led the way with a second-half hat-trick as Australia brushed aside Honduras 3-1 in the second leg of their inter-confederation playoff to secure a place at next year's World Cup finals in Russia on Wednesday.

The midfielder scored from a deflected free kick and two penalties to give Australia a comfortable aggregate victory and send the Asian champion to the finals for the fourth straight tournament.

Honduras, which had been held to a 0-0 draw in the home leg last week, had been bidding for a third successive World Cup appearance but offered little in attack until Alberth Elis's stoppage-time goal earned the visitors some scant consolation.

"It's a bit hard to describe, it's unreal," Jedinak said in a post-match interview. "We knew it was always going to be a difficult qualifying campaign but this makes it very, very special.

"It's been a tough two-and-a-half years to get to this point but we did it. We're very grateful we're going to another World Cup."

It was the 22nd match of Australia's qualifying campaign and it remains to be seen if coach Ange Postecoglou will lead the squad to Russia after he was reported in local media to be contemplating stepping down.

It seems unlikely he will make his future clear on Wednesday and spoil a party which got under way with a fireworks display over Sydney harbor as soon as the final whistle sounded.

As in San Pedro Sula last Friday, the Socceroos had the better of a forgettable first half without being able to forge a breakthrough. 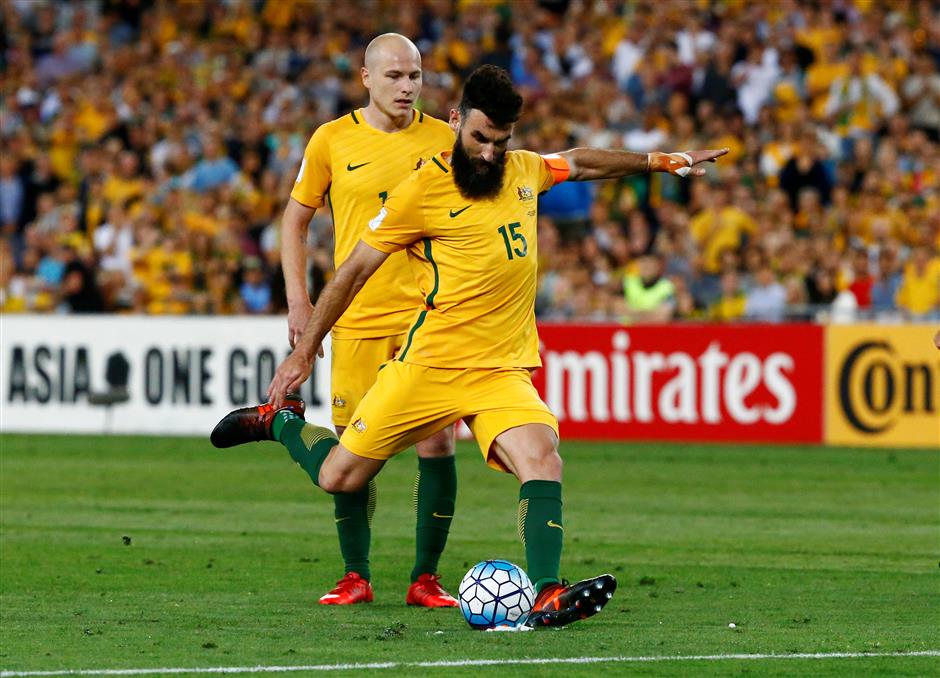 Australia’s Mile Jedinak scores the first goal from a free kick during their World Cup playoff second leg against Honduras in Sydney on November 15, 2017. The captain scored a treble in Australia's 3-1 win.

Tim Cahill, who missed that match with an ankle injury, started as a lone striker but his teammates were unable to present him with any clear-cut chances to notch up his 51st international goal.

The 37-year-old turned provider in the 37th minute when he combined with Aziz Behich on the left flank to carve out an opportunity for Tom Rogic, only for the Celtic midfielder to direct his shot straight at goalkeeper Donis Escober.

That aside, Aaron Mooy's set-piece deliveries provided Australia's main threat but Honduras, while offering almost nothing in attack, survived reasonably comfortably until the break.

The nervous wait for an opening goal ended seven minutes into the second half when Rogic finally put together one of his trademark mazy runs and was brought down on the edge of the penalty box.

Jedinak stepped up to fire his free kick wide of the wall and into the midriff of substitute defender Henry Figueroa, with the resulting deflection sending the ball back past the diving Escober into the net.

The 77,060 crowd at the ANZ Stadium in Sydney had barely retaken their seats when Cahill almost doubled the lead with a header from the edge of the penalty area that landed on Escober's crossbar.

The second goal did come in the 72nd, however, when Mooy's low cross from the left grazed the hand and foot of Bryan Acosta inside the area and Jedinak's powerful spot kick to the left proved too strong for Escobar's outstretched fingers.

Honduras was finally forced to chase the game but Australia pulled further clear when Jedinak put his second penalty into the opposite corner after Robbie Kruse had been brought down by Johnny Palacios five minutes from time.

Elis completed the scoring when he prodded home from close range following a goal-mouth scramble from a Honduras corner.