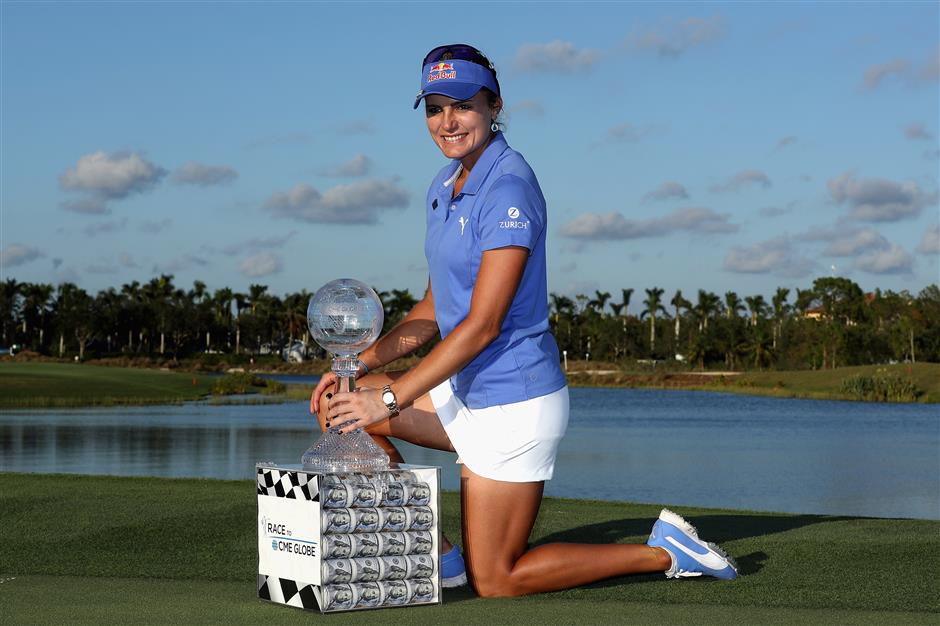 Lexi Thompson of the United States poses with the CME Race for the Globe trophy and a box containing US$1 million after the final round of the CME Group Tour Championship at the Tiburon Golf Club in Naples, Florida, on November 19, 2017.

Lexi Thompson never had a putt so short that was potentially worth so much.

The American had a one-shot lead when she settled over a 2-foot par putt on the final hole on Sunday at the CME Group Tour Championship in Naples, Florida. A victory would be worth US$500,000 in prize money and US$1 million in a bonus. She would win LPGA player of the year and the Vare Trophy for the lowest scoring average.

She would rise to No. 1 in the world.

Moments later, Ariya Jutanugarn capped off her birdie-birdie finish with an 18-foot putt to win the tournament and deny Thompson three of those perks.

"I don't really know what happened there," Thompson said. "It just happens. I guess it's golf. I guess we all go through situations we don't like sometimes."

Thompson has gone through her share of them this year. Unlike the others, this one came with a US$1 million consolation.

Ariya birdied four of her last six holes for a 5-under 67 and seized on her good fortune when Thompson missed the short putt to win the CME Group Tour Championship and the US$500,000 first prize.

A wild end to the LPGA season sent four players home with a trophy of some variety.

Although she lost the tournament, Thompson still won the CME Race to the Globe and the US$1 million bonus, along with the Vare Trophy.

Thompson had to win the tournament to be player of the year. Instead, the points-based LPGA player of the year was a tie between a pair of major champions from South Korea, Ryu So-yeon and LPGA rookie Park Sung-hyun. It was the first time the award was shared since it began in 1966.

Park, the US Women's Open champion, was trying to become the first rookie since Nancy Lopez in 1978 to sweep the major awards. She already had won rookie of the year. She had to settle for a tie for player of the year, and her 75 in the third round damaged her chances of winning the Vare Trophy. 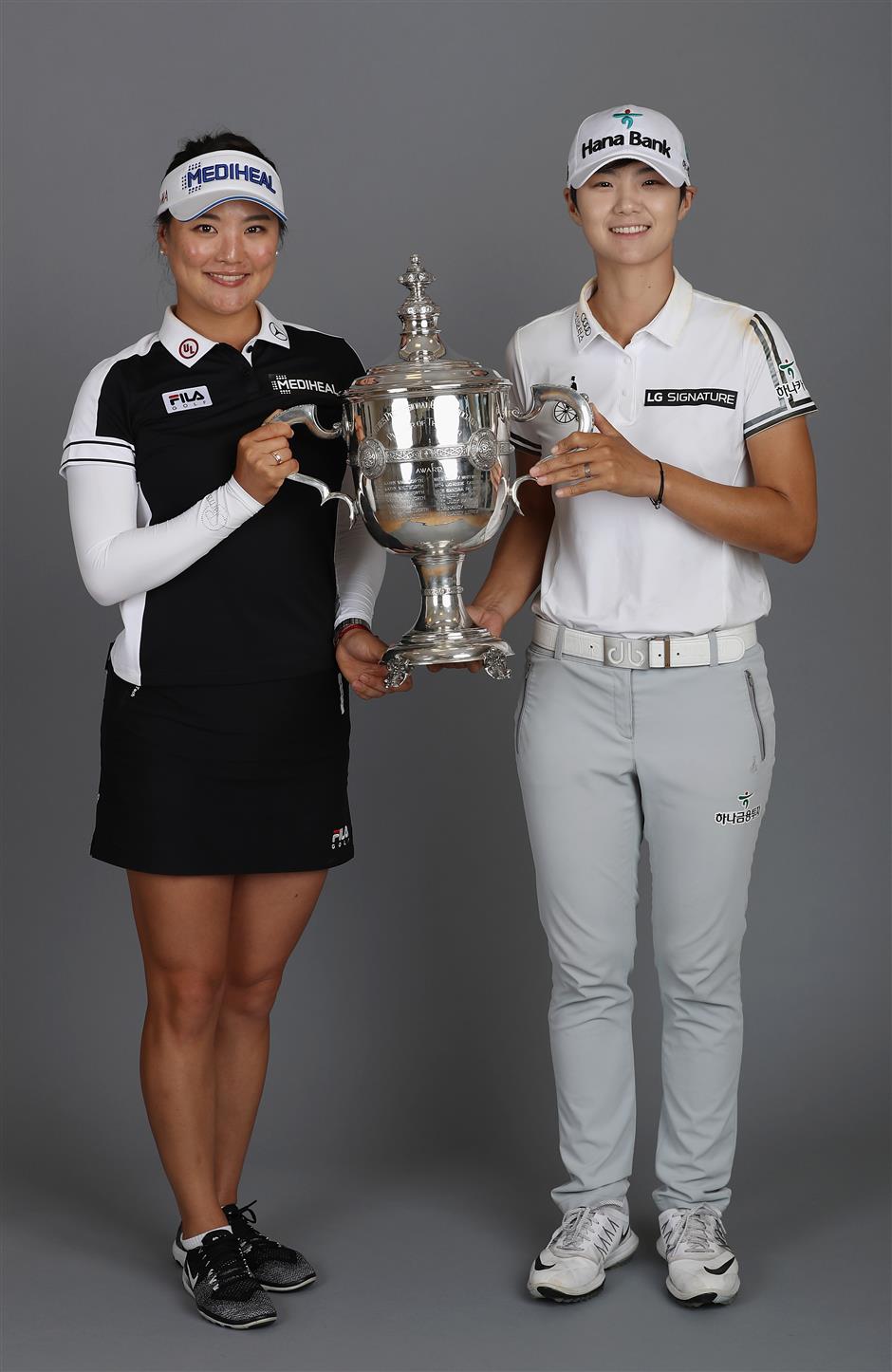 South Koreans Ryu So-yeon (left) and Park Sung-hyun pose with the player of the year trophy after the final round of the CME Group Tour Championship in Naples, Florida, on November 19, 2017.

What stood out on another sunny afternoon was the sterling performance of Ariya, who won for the second time this year.

Ariya was at 13 under on the par-5 17th when she hit a hybrid for her second shot into the bunker and blasted out to about 18 feet. Ahead of her on the 18th green, Thompson was at 15 under and lagged a 50-foot birdie attempt beautifully down the slope on the 18th to 2 feet left of the cup.

The Thai made birdie. Thompson missed her par putt, and there was a three-way tie for the lead at 14 under that included Jessica Korda, who was playing with compatriot Thompson and had left her 25-foot birdie attempt well short.

Thompson and Korda each closed with a 67.

Ariya hit her approach about 18 feet above the hole and made it for winning birdie. She finished at 15-under 273.

"I had no expectation at all," Ariya said. "I really did not think about the outcome."

Ariya was part of a four-way tie for the lead going into the final round, and the CME Group Tour Championship was up for grabs most of the day until Thompson seemingly seized control with 32 on the front nine, a 10-foot birdie on the 13th and then a superb pitch from left of the 17th green that set up a 3-foot birdie. 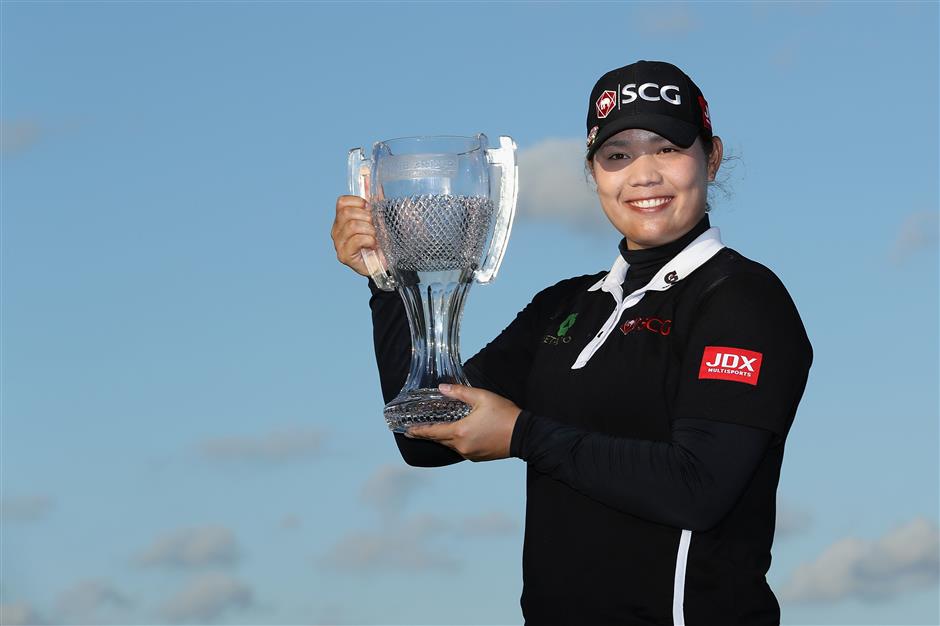 Ariya Jutanugarn of Thailand poses with the trophy after winning the CME Group Tour Championship at the Tiburon Golf Club in Naples, Florida, on November 19, 2017.

Pernilla Lindberg of Sweden had reason to believe she needed birdie from long range on the 18th to have a chance. She ran that 7 feet by the hole and three-putted for a bogey and a 68. She wound up finishing two shots behind, along with Ji Eun-hee (67) of South Korea.

Michelle Wie, trying to win for the first time since the US Women's Open in 2014, had a share of the lead until she hit near the edge of a bunker and made double bogey on No. 9, and then dropped two more shots on the back nine. Even with seven birdies, Wie still only managed a 70. The American tied for sixth with Park, who closed with a 69. Park was at 13 under through 35 holes and played 1 over the final 37 holes.

Ryu was coping with a shoulder injury and was happy to squeeze in 72 holes. She wound up a part-winner of LPGA player of the year.

Thompson was on the putting green when she heard the cheer for Ariya's final birdie.

It was the second time this year that Thompson appeared to be in control and was stunned to not win. She had a four-shot lead in the final round of the ANA Inspiration when she was penalized four shots — two for incorrectly marking her golf ball on the green in the third round, and two more shots because the infraction wasn't discovered by a viewer until the next day, and so she signed an incorrect scorecard in the third round.

She wound up losing to Ryu in a playoff, though Thompson said this week it made her a stronger person.

"I continue to work hard in my off weeks," she said. "I didn't stop me, and this won't either."