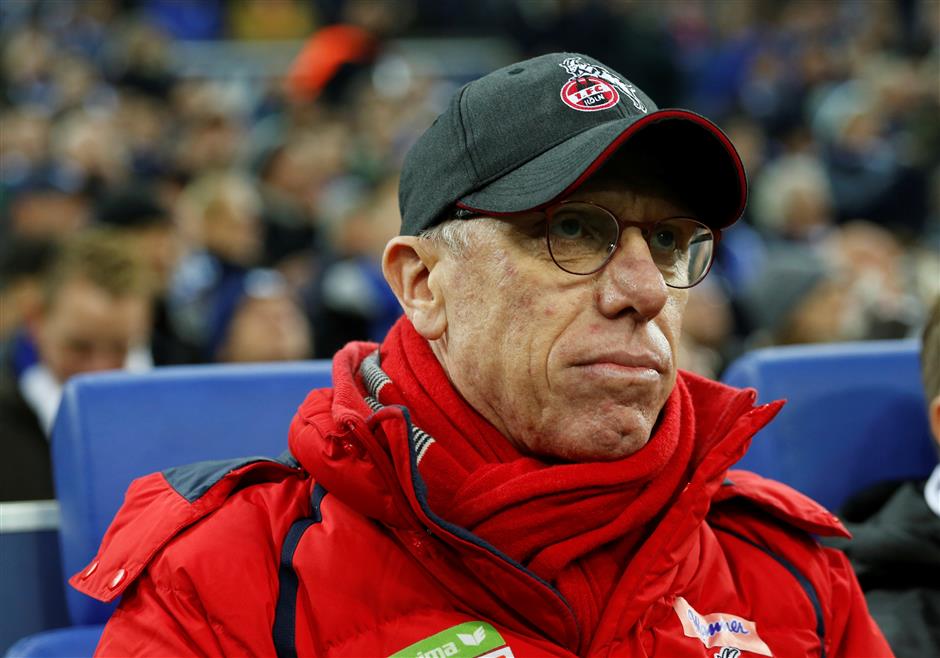 Cologne coach Peter Stoeger is seen along the sidelines during the German Bundesliga match against Schalke 04 at the Veltins-Arena in Gelsenkirchen on December 2, 2017. Stoeger was sacked on December 3, 2017, with his team winless in the league this season.

Peter Stoeger was finally sacked as FC Cologne coach on Sunday, ending his 1,634-days reign with the club bottom of the German Bundesliga and winless after a disastrous run of results.

Although Cologne earned a 2-2 draw at Schalke on Saturday, denying the hosts the chance to go second in the Bundesliga, it emerged Stoeger knew it was his last game following discussions on Friday.

He doffed his cap at visiting fans after the final whistle at the Veltins-Arena in a farewell gesture with the team 11 points from safety.

"On Friday, it was clear that the game at Schalke would be our last. To be able to focus on this important game, we decided only to communicate that on Sunday," Stoeger said on behalf of his coaching team.

Cologne has just three points and is winless after its first 14 games as the club's bosses took the long-anticipated step of releasing Stoeger.

"We have felt in the past few days that we need to part ways, regardless of the outcome at Schalke it was important for Peter to make a clean cut," said Cologne's CEO Alexander Wehrle.

"I refuse to talk about the second league at this point.

"There are still 20 league matches to play and it is our responsibility to attain the maximum out of what remains."

The club's Under-19 coach Stefan Ruthenbeck is now in charge until the end of the year.

The 45-year-old Ruthenbeck will oversee Thursday's Europa League match at Red Star Belgrade, where a win will see Cologne qualify for the knockout stages.

Ruthenbeck will also be in charge for next Sunday's key league match against fellow struggler SC Freiburg, which is 16th and nine points ahead of Cologne in 18th and last place.

Stoeger leaves having become a cult hero in Cologne.

He took over in 2013 when it was in the second division and steered Cologne back to Germany's top flight for 2014/15.

He ended Cologne's 25-year wait for European football when it finished fifth last season to qualify for the Europa League after striker Anthony Modeste scored 25 goals in 34 Bundesliga games.

However, the decision to send the burly Frenchman on loan to Chinese club Tianjin Quanjian backfired.

His replacement, Colombia's Jhon Cordoba, signed in June from Mainz for a reported 15-million euros (US$17.8 million), has yet to score this season and Cologne has managed just six league goals all season.

French striker Sehrou Guirassy is the club's top scorer with three goals, two of which came in Saturday's draw at Schalke.