Barcelona ground out a 2-0 victory over Villarreal on Sunday to go five points clear at the top of La Liga, continuing its excellent start to the season.

On paper it has been business as usual for a Barcelona side accustomed to success, but Ernesto Valverde's team plays a very different style of football to that of his predecessor Luis Enrique.

Although the former Athletic Bilbao coach has chosen to change from a 4-3-3 to a 4-4-2, adding a man in midfield to increase ball possession, this Barcelona is also far cry from Pep Guardiola's passing demons from 2008-12.

With electric winger Neymar leaving for Paris Saint-Germain, Barcelona lost its most creative player behind Lionel Messi and it has had positive and negative effects on the team.

Although Ousmane Dembele was signed to replace the Brazilian, his injury has resulted in Valverde using Paulinho as an extra midfielder.

With four central midfielders on the pitch, even with two of them moving into wider positions, Barcelona is much harder to break down, playing pragmatic but slow football.

The Catalans have conceded only seven goals in La Liga, joint fewer than any other side with Atletico Madrid, which is renowned for its rock-solid defense.

In attack, however, it means they are reliant on the quality of Messi and Luis Suarez, meaning if defenses can keep the striking duo shackled, Barcelona has trouble finding a way through.

That was the case at Estadio de la Ceramica, with Villarreal keeping the door shut until midfielder Daniel Raba was sent off for a foolish lunge at Sergio Busquets.

When the hosts were reduced to 10 men it was far easier for the Catalans to unpick them, with Suarez and Messi scoring.

"The first half was very even but after the red card we had more chances on goal to win the game," Suarez said. "The red card hurt them but Paco Alcacer coming on also helped the team."

With Barcelona in need of a goal, Valverde hauled off midfielder Denis Suarez, who was standing in for injured captain Andres Iniesta, and his replacement Alcacer teed up Suarez.

When Dembele returns from injury in January it will give Valverde the chance to bring the thrill and excitement back to Barcelona's game, but the coach might be reluctant to change a winning, albeit at times dull, formula. 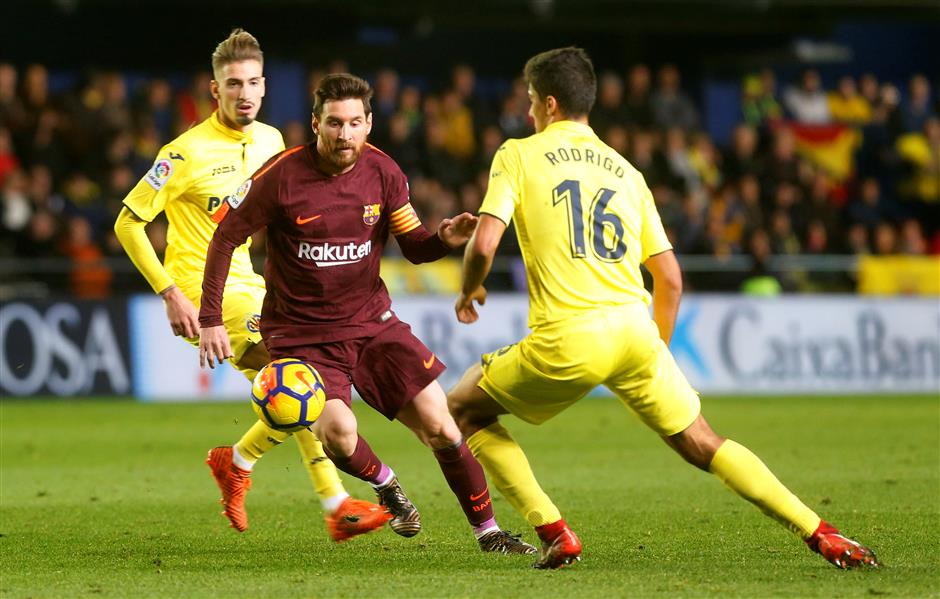