Becker takes full control of the day-to-day management of the organization, becoming one of the NFL's most powerful women, even as Richardson fades from the scene after Sports Illustrated reported details of sexual misconduct allegations by Richardson and at least one instance of a racial insult to an African-American scout.

"These have been some of the most difficult days of my 19 years with the Panthers. But I am lifted up by the strong resolve and the commitment our employees have shown to this organization," Becker said in a statement.

"Our team on the field is performing at a very high level, and I believe is bound for the Super Bowl.

"My immediate focus will be to ensure the corporate side of the organization performs at the same high level, while addressing the real concerns that have been raised in recent days."

The Panthers announced on Friday they were investigating Richardson's conduct and the Sports Illustrated report said at least four former Panthers employees have received "significant" monetary settlements due to inappropriate workplace comments and conduct by Richardson, including sexually suggestive language and behavior.

Richardson, according to the report, would make remarks about women's rears on "Jeans Fridays" on his way to his office.

Becker has handled business operations, entertainment, stadium operations, ticketing and sponsorship for the Panthers and has the support of former Bank of America chief executive and chairman Hugh McColl, who with Richardson led the effort that lured an NFL expansion team to Charlotte.

"Tina is the right person to lead this organization," McColl said. "I know she is committed to the Panthers, to the city of Charlotte and to ensuring this organization is run in a professional and progressive manner." 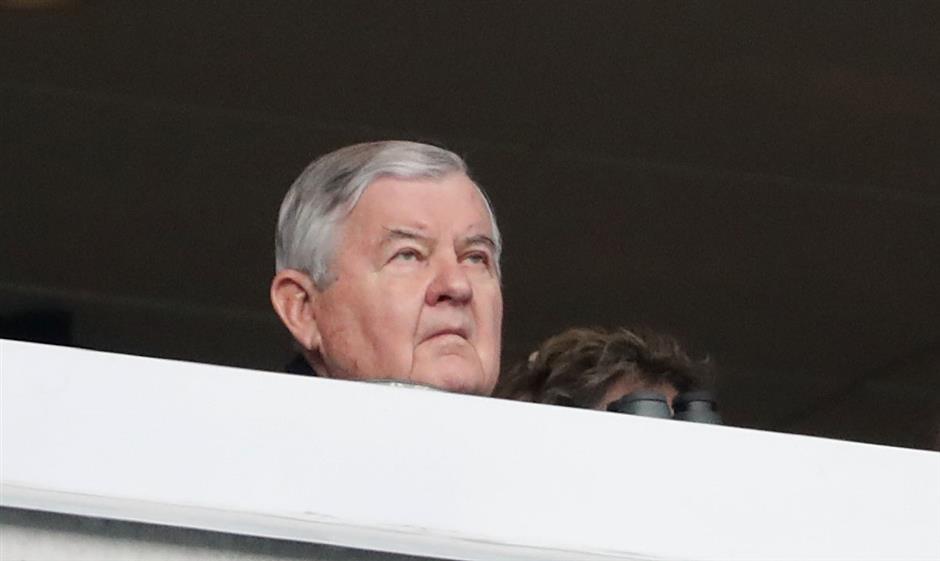 Carolina Panthers owner Jerry Richardson looks on during their NFL game against the Green Bay Packers at Bank of America Stadium in Charlotte, North Carolina,  on December 17, 2017.

Panthers coach Ron Rivera was hired by Richardson in January 2011.

"He has truly helped me and given me every opportunity," Rivera said. "He was the first owner in my nine interviews to give me that chance. That's all I can speak of.

"I know the allegations are serious. I know the league is doing an investigation, and everybody should be heard and respected. At the end of the day, who am I to judge? We need to have all the answers before we can do any of that.

"I just think that as we go forward as a football team, I think it's important to remember that we're still here obviously to play football."

At 10-4, the Panthers share the NFC South division lead with New Orleans, although the Saints own a tiebreaker edge from sweeping their two games this season.

"We've been weathering the storm and not letting the media affect and alter our focus," Panthers quarterback Cam Newton said. "I'm just happy that we're winning."

Carolina, which has won six of its past seven games, is at home against Tampa Bay before visiting Atlanta to conclude the regular season.