The Detroit Pistons shook up their struggling roster in dramatic fashion, acquiring star forward Blake Griffin in a trade with the Los Angeles Clippers.

"We are serious about winning, and this is a major move to improve our team," Pistons owner Tom Gores said in a statement. "Blake Griffin is one of the NBA's elite players, and when you get an opportunity to add that kind of talent, you take it."

Griffin is averaging 22.6 points, 7.9 rebounds and 5.4 assists in 33 games this season, but the Clippers have been plagued by injuries and are ninth in the Western Conference standings.

Detroit is scuffling as well. The Pistons have lost eight straight heading into Tuesday night's game against Cleveland.

The 28-year-old Griffin has been the face of the Clippers, and last July, he agreed to a US$171-million, five-year deal, ending a brief flirtation with free agency. He told his teammates, coach Doc Rivers and owner Steve Ballmer, "I want my legacy to be a Clipper."

The deal didn't include a no-trade clause.

The addition of Griffin gives Detroit's frontcourt another standout alongside Andre Drummond, but it also represents a clear change in course from the roster the Pistons had assembled. Detroit acquired Bradley in a trade with Boston last offseason, but he's in the final season of his contract. Harris has been impressive for the Pistons this season, shooting a career-best 41 percent from 3-point range.

"The move is not without risk. We gave up a lot to get him, including Tobias Harris — one of the hardest-working, highest-character players I know — and two high-quality young men in Avery Bradley and Boban Marjanovic," Gores said. "But we are very excited to bring Blake Griffin to Detroit. He is a great fit for our team and will bring a combination of toughness and athleticism that will elevate our team and excite our fans."

Detroit's season was looking promising until a late-December injury to point guard Reggie Jackson. The Pistons have stumbled while he's been out with a sprained right ankle, and the team is facing the prospect of missing the playoffs in its first season at its new downtown arena.

Detroit's next six games are at home, so the Pistons will have a chance to turn this season around — and an opportunity to build for a future with both Griffin and Drummond. 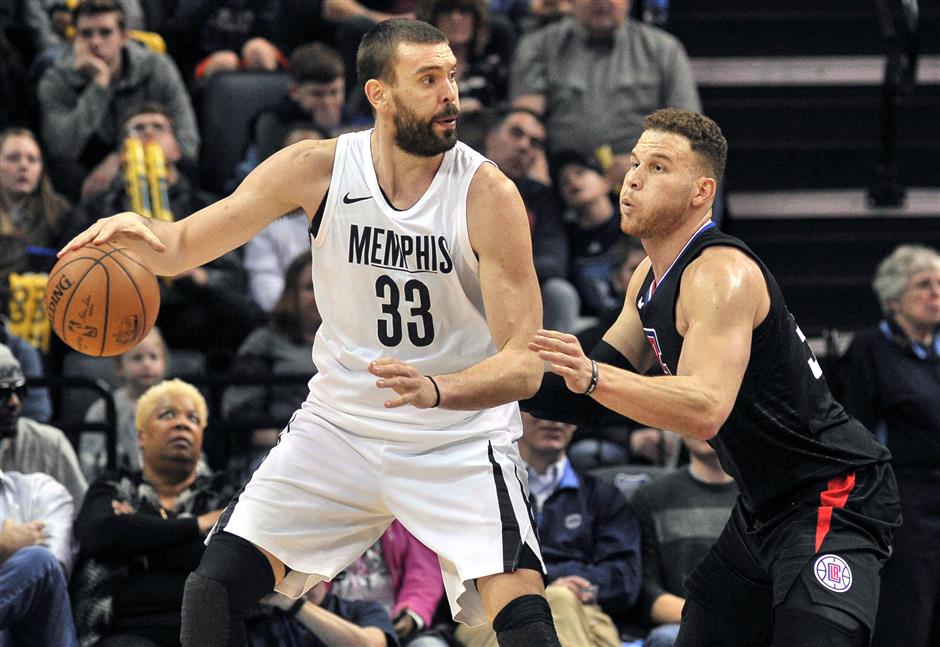 Memphis Grizzlies center Marc Gasol (left) dribbles to the basket against Los Angeles Clippers forward Blake Griffin during the first half of their NBA match at FedExForum in Memphis, Tennessee, on January 26, 2018. Griffin was traded to the Detroit Pistons in a blockbuster deal.

"His presence will help us offensively and his size gives us another rebounder and weapon in the paint," said Stan Van Gundy, Detroit's coach and team president. "Willie Reed and Brice Johnson are two young players that give us size and depth."

For the Clippers, moving Griffin continues a makeover of a franchise that has never made it past the second round of the playoffs.

The Clippers traded All-Star point guard Chris Paul to Houston last summer. He had been credited with bringing respectability to the team that was once the laughingstock of the league. Without Paul, Los Angeles won its first four games to open the season, and then lost nine of its next 11. The team is one game above .500 going into Tuesday night's game against Portland.

Los Angeles receives a protected first-round draft choice and a second-round pick from the Pistons.

The Clippers drafted Griffin first overall out of Oklahoma in 2009. However, he missed the 2009-10 season after surgery on his broken left kneecap, the first of several injuries that have marred his career.

As a rookie, he was an All-Star, won the slam dunk contest and was named National Basketball Association Rookie of the Year.

Even before the Pistons announced the deal, there was plenty of reaction on social media on Monday night. Harris had a message on his accounts thanking Detroit for its support. Griffin's Twitter account had its own message with no words — just an image of actor Will Smith with a surprised expression on his face.