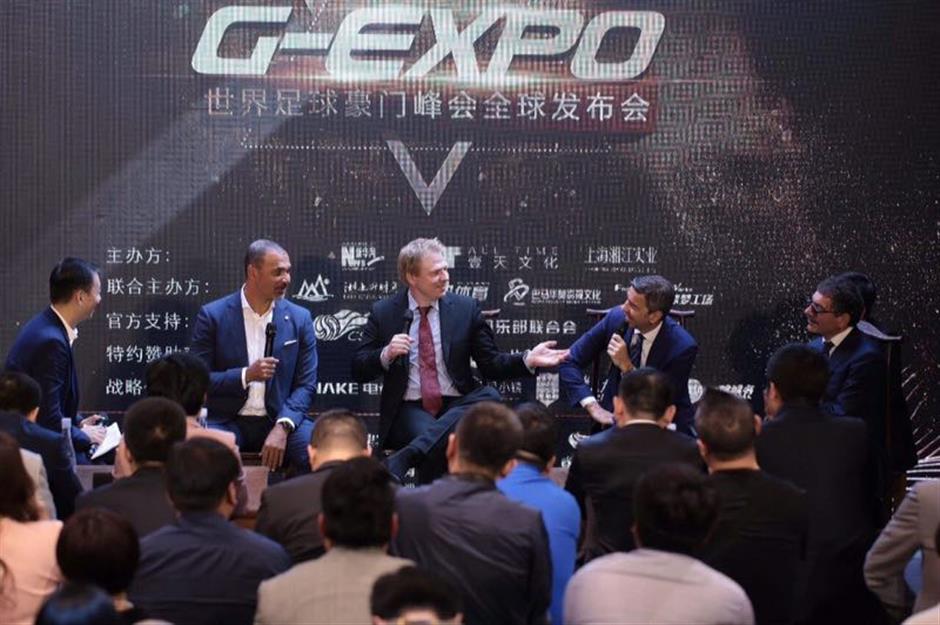 Ruud Gullit (second left) and Alessandro Costacurta (second right) are in Shanghai to promote the G-Expo which will be held in Anhui's Bengbu in June.

ALESSANDRO Costacurta said his choice as Italy’s national team manager is still “busy with club affairs” and his name will only be revealed at the end of the Serie A season.

The vice president of the Italian football association was speaking in Shanghai during a promotional press conference for the G-Expo, a football-themed summit which will gather top players, coaches and industry insiders in Bengbu, neighboring Anhui Province, in June.

“The person of my preference is still working for his club. Therefore, it would not be suitable to reveal the name of the candidate for at least another month,” Costacurta said.

The former Milan and Azzurri defender also spoke about his country’s failure to advance to this year’s World Cup in Russia.

“The Italian national team has not been walking along a correct path since winning the World Cup in 2006. The country thought it already owned a squad that could win back trophies in the following years. Therefore, it lagged behind in youth training, including building up facilities and football pitches.

“There are ups and downs in football, and what Italy is facing is the shortage of a certain generation of players. So I don’t think the head coach (Gian Piero Ventura) had much responsibility in it (Italy failing to qualify for the World Cup),” said Costacurta.

Football-themed forums will be organized, along with interactive activities between star players and local fans.

Former Netherlands captain Ruud Gullit was present at the promotional press conference in Shanghai. His country also failed to qualify for this year’s World Cup. The former Milan star cited two reasons for the disappointing result.

“Firstly, the Netherlands is a small country with some 16 million people, and the sustainability of its football talents is not stable.

“Secondly, the seven top-ranked Dutch clubs use artificial grass pitches, which is much different from real grass ones, used in many competitions. The country needs to improve its football facilities and environment. But I still believe more Dutch football talents will come up in the future.”