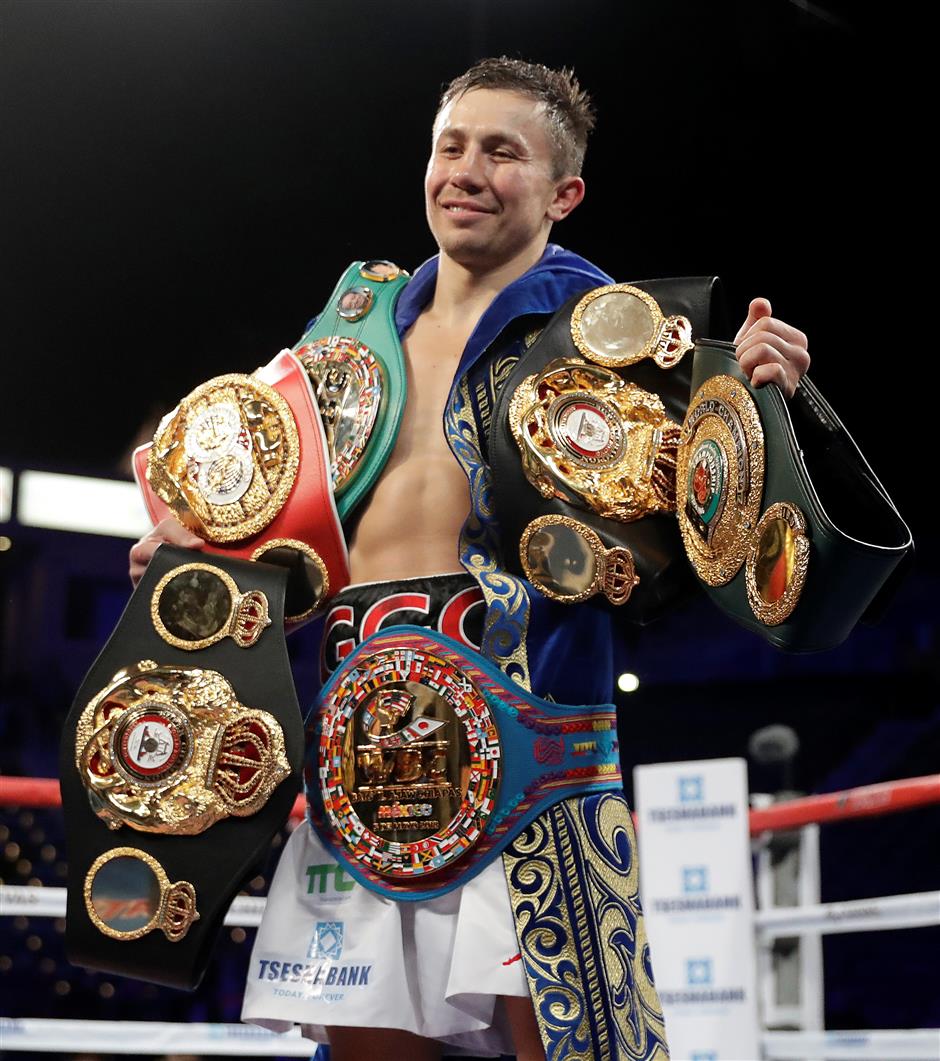 Gennady Golovkin poses with his belts after defeating Vanes Martirosyan in a middleweight title boxing match in Carson, California, on May 5, 2018.

Gennady Golovkin equalled the record of 20 straight world middleweight title defenses with a devastating second-round knockout of Vanes Martirosyan on Saturday to retain his WBA and WBC belts.

Golovkin ended the fight with a vicious series of right and left combinations that floored the heavy underdog Martirosyan, who appeared doomed from the outset of the hastily arranged fight at the StubHub Center.

“The first round I was just looking, because I know he is a good fighter,” the 36-year-old Golovkin said. “The second round it was true business.”

Martirosyan, 31, was in big trouble from the beginning of the second round as Golovkin rendered the challenger helpless by landing a right uppercut on the chin. He followed with a few stinging jabs and then a full throttle left hook and straight right on the ropes that put Martirosyan down for good at 1:53 of the round.

The American tried to get up before the 10 count but slumped forward, ending up face down on the canvas. Golovkin, who is boxing’s longest-reigning current world titleholder, is now unbeaten in 39 fights, including 34 by knockout.

Martirosyan was a last-minute replacement following the cancellation of the Kazakh’s much anticipated rematch with Saul ‘Canelo’ Alvarez of Mexico.

The rematch was cancelled because of Alvarez’s two failed drug tests in February, followed by his suspension by the Nevada State Athletic Commission on April 18. Alvarez will be free to fight once his suspension ends in August.

Saturday’s event was moved from Las Vegas to Los Angeles and Golovkin fought for a fraction of the money he would have received for a fight against Alvarez. With the victory he now joins Bernard Hopkins for the division record of 20 successful title defenses.

In London, Tony Bellew appeared to have all but ended David Haye’s career with a fifth-round stoppage win over his rival British heavyweight in their grudge re-match on Saturday.

The pair had become as well-known for their pre-match dust-ups and verbal taunts as their boxing but there was no denying the comprehensive manner of Bellew’s second successive victory over the 37-year-old Haye, who had hoped a win might propel him to a lucrative bout with Britain’s reigning world heavyweight champion Anthony Joshua, but that dream was ended in brutal fashion by Bellew.