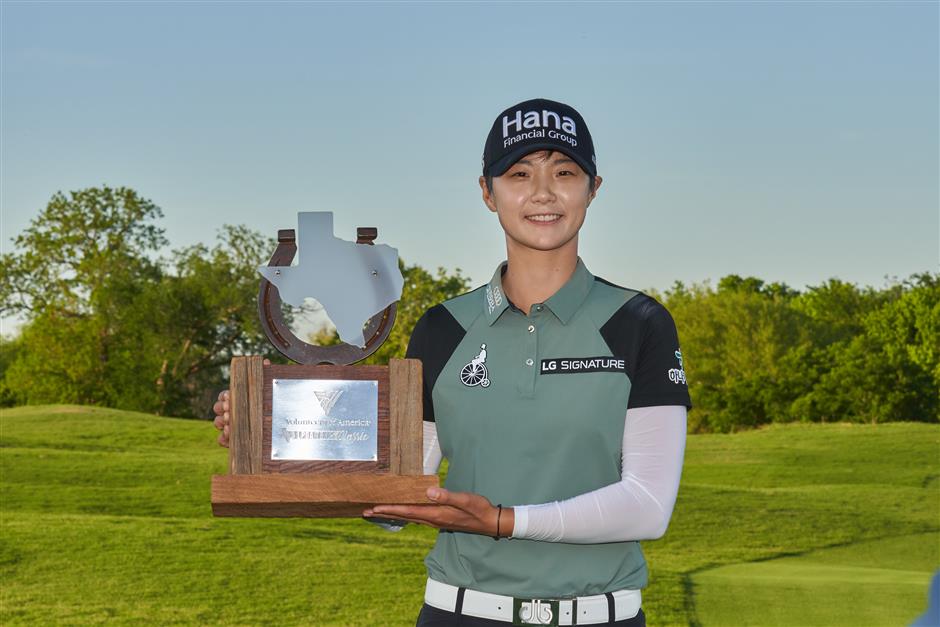 Park Sung-hyun poses with the Volunteers of America LPGA Texas Classic trophy following her one-stroke victory at the Old American Golf Club near Dallas, Texas, on Sunday. The South Korean chipped in for birdie on the final hole to edge fast-closing Lindy Duncan and win the storm-shortened tournament. Park fired a 5-under-par 66 in the second round to finish the 36-hole event at 11-under 131, one shot ahead of American Duncan with Chinese rookie Liu Yu another shot adrift in third on 133. Thailand’s Ariya Jutanugarn and South Korean Kim Sei-young shared fourth with another South Korean Jenny Shin and India’s Aditi Ashok on 135.

Australia's Jason Day birdied 2 of the last 3 holes on Sunday to capture the Wells Fargo Championship, collecting his 12th career US PGA title and second of the year.

Day, the 2015 PGA Championship winner, held off Americans Aaron Wise and Nick Watney with a final-round 2-under-par 69 to finish on 12-under 272 for a 2-shot victory at Quail Hollow in Charlotte, North Carolina.

On the same course where he contended before faltering late in last year’s PGA Championship, the 30-year-old stumbled with back-to-back bogeys and fell level with Wise with 4 holes remaining.