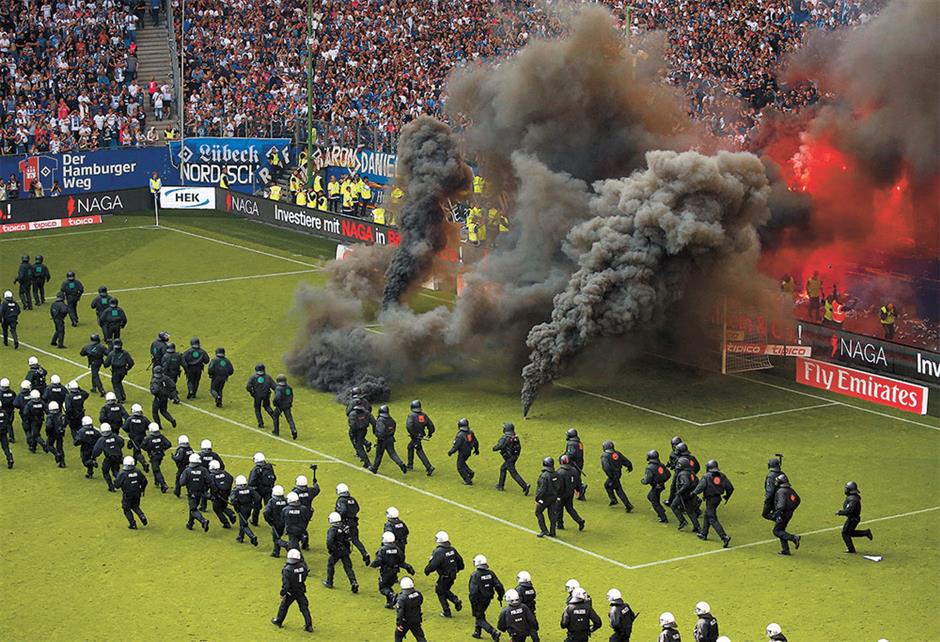 Hamburg fans let off flares and throw smoke bombs on to the pitch as riot police line up across the ground during their Bundesliga match against Borussia Moenchengladbach in Hamburg on Saturday. The hosts won 2-1 but were still relegated.

Former European champion Hamburg SV was relegated for the first time on Saturday, its fans throwing flares on to the pitch as the team’s record uninterrupted top-flight run since the Bundesliga began in 1963 came to a controversial end.

VfL Wolfsburg’s 4-1 win over bottom club Cologne meant Hamburg’s 2-1 victory over Borussia Moenchengladbach, which was interrupted for 15 minutes due to the crowd trouble in stoppage-time at home, proved in vain.

“This is an extremely painful moment for the entire Hamburg SV,” club president Bernd Hoffmann said. “The club has lost one of its uniquenesses.

“The diamond (club logo) and us as a club are strong despite this current moment and we will in the future again reflect that strength.”

Hamburg, a six-time German champion and European champion in 1983, will join Cologne in the second division next season, while Wolfsburg goes into a relegation playoff.

Dozens of riot police, several on horses, charged on to the pitch and lined up in front of the Hamburg fans, who lit flares and threw them behind the ‘Gladbach goal when it became clear that the team was on its way to the second division.

Hamburg was leading 2-1 in stoppage-time when referee Felix Brych stopped the game.

The fires were put out and police gradually left the field so the game could resume and the final seconds be played out.

“I cannot imagine Hamburg without Bundesliga football,” said club great Uwe Seeler, West Germany’s first post-war soccer star. “I never thought that in my lifetime I would experience the relegation of Hamburg.”

Seeler, 81, spent 18 years at the club between 1954 and 1972, scoring over 400 goals, and played in 4 World Cups. “I will be watching the games in the second division and I believe Hamburg will survive that and I will see them get promoted.”

Hamburg had taken an early lead through Aaron Hunt and went in front again with a Lewis Holtby goal just past the hour after ‘Gladbach had levelled before halftime. Even when Hamburg went down to 10 men after the dismissal of Bobby Wood in the 71st, it kept battling, hoping for a miracle but events at Wolfsburg ensured it never came.

With the stadium clock marking the club’s record stay in the Bundesliga and showing 54 years and 260 days, fans stayed in their seats and with tears in their eyes gave the players their last Bundesliga cheer.