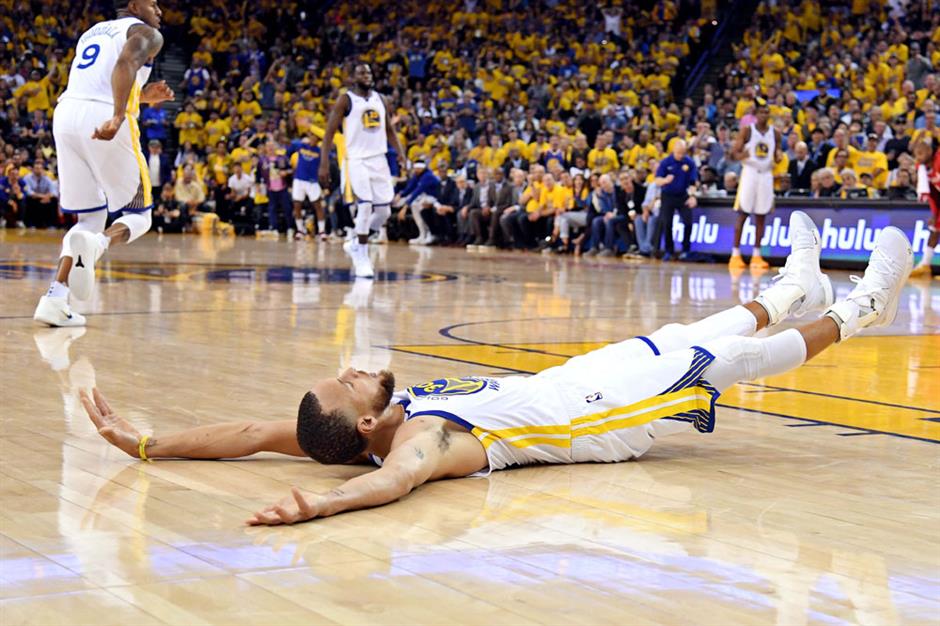 Golden State Warriors guard Stephen Curry reacts after a play during the third quarter against the Houston Rockets in Game 3 of the NBA Western Conference finals at Oracle Arena in Oakland on Sunday. The Warriors won 126-85.

Stephen Curry hit seven straight shots, including a pair of 3-pointers, in a third-quarter flurry on Sunday night that broke open a competitive game and sent the Golden State Warriors to a 126-85 blowout win over the Houston Rockets in Game 3 of the Western Conference finals in Oakland, California.

Curry, who had been held to a total of 34 points in the first two games of the series, exploded for 35 points in 34 minutes, propelling the Warriors into a 2-1 lead over the top-seeded Rockets in the best-of-seven series.

“That’s what I expected to do, but just like my approach after every game is you don’t get too high after highs, don’t get too low after lows.” Curry said in an on-court interview after the game. “Obviously thankful to hit some shots tonight, eventually.”

Kevin Durant had 25 points, while teammate Draymond Green had a game-high 17 rebounds to complement 10 points, as the Warriors rebounded from a 105-127 shellacking on Wednesday in Game 2 in Houston.

The Warriors have lost three games in their three series this postseason, and have rebounded to win the next contest by a combined 65 points.

“Tonight was all about defense and taking care of the ball,” Warriors head coach Steve Kerr said. “That’s it. When we defend at that level and take care of the ball, we’re usually in pretty good shape.”

James Harden had 20 points and a game-high 9 assists to lead the Rockets, who had won three of their previous four road games in the postseason. Houston had the best road record in the NBA during the regular season at 31-10.

The 41-point loss margin was the largest in the Rockets’ postseason history.

“It was not a very good game, and we’re going to have to play a lot better Tuesday,” Rockets head coach Mike D’Antoni said. “We have short memories. Have to.”

The Rockets led by as many as four points in the first quarter and trailed just 43-54 at halftime before Curry almost single-handedly left them in the dust in the third period.