Akinfeev out to save host Russia's World Cup blushes 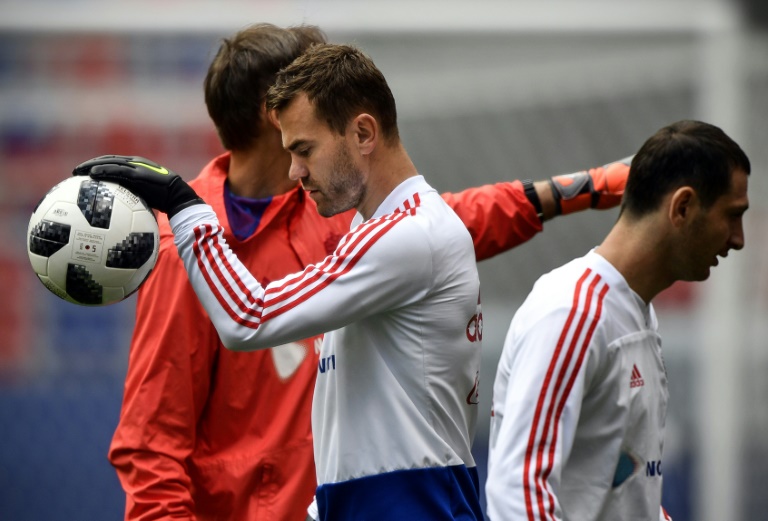 Russia's love for Igor Akinfeev, their goalkeeper who spends much of his time picking balls out of the net, speaks volumes about the home team's World Cup chances.

Now Akinfeev wants someone who can score to share the fame when the men in red get the party started against Saudi Arabia on Thursday.

"The team have to come out and play," Akinfeev said after a 1-0 loss in a friendly to Austria on May 30 in which Russia did not register a single shot on target.

"If they do not, the score is not going to change."

The 32-year-old CSKA Moscow veteran is the World Cup star you may very well have never heard off.

The Russian captain has played more games for club (565) and country (106) than Soviet goalkeeping legends Lev Yashin and Rinat Dasayev.

He has won six league titles and been named Russia's top 'keeper 10 times.

Yet an injury in the early bloom of his career thwarted his move to the bright lights of the English Premier League and consigned him to a life of domestic accolades.

Akinfeev will guarantee himself international renown if he manages to see the hosts make the unlikeliest of impacts on the beautiful game's biggest stage.

Russia's performance entering the World Cup has not just been poor, it has been historically so.

Coach Stanislav Cherchesov's men enter the World Cup as the first Soviet or Russian side to go winless in seven matches.

They became the lowest-ranked of the 32 teams in the tournament by sliding to their lowest FIFA ranking ever, 70th.

Fans let their frustration show by whistling them off the pitch after they drew their final warm-up against Turkey 1-1 in Moscow on June 5.

"Your job is to believe in us," Cherchesov told sceptical reporters after the match.

Things were not always this bleak.

Cherchesov was Russia's goalkeeper when the squad still had Soviet-era talent and were ranked in the top five for parts of the 1990s.

They showed flashes of brilliance in reaching the semi-finals of Euro 2008.

Most of the decade since was supposed to have been spent building a team that could make the nation proud at their first home World Cup.

Cherchesov will point out that his squad were coming along nicely until getting hit by a head-shaking rash of injuries in the spring.

Russia lost a starting striker and four big defenders within a matter of weeks.

The problems got so dire that Cherchesov had to ask 38-year-old Sergei Ignashevich to come out of international retirement and shore up the defence.

The coach's critics counter that Russia were losing friendlies against modest competition even while healthy last year.

Akinfeev's role in proving Cherchesov right is made especially big by the group in which Russia were drawn.

They will play their second match against an Egyptian side hoping to get super striker Mohamed Salah back from an injury he suffered in Liverpool's Champions League loss to Real Madrid.

A top-two finish would see Russia progress to the last 16 and a likely matchup against either Cristiano Ronaldo's Portugal or high-octane Spain.

Akinfeev is the type of flashy reflex savemaker who just might give Russia a chance to put together a memorable run -- should they also not forget to score.

"And another reason I like him is that he is simply a very good person. He is someone everyone respects."