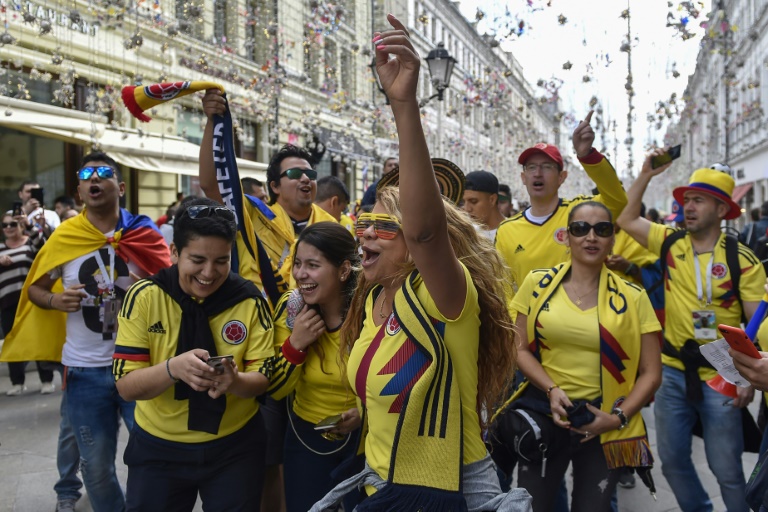 A quiet pedestrian street leading off from Red Square, Moscow's Nikolskaya Street has unexpectedly become the party zone of choice for thousands of international World Cup fans, to the bemusement of locals.

During the day but even more so at night, the 700-metre-long street with elegant stucco facades is packed to bursting.

Walking through, a passerby has to squeeze past ubiquitous groups of Argentinian supporters, pass a cafe taken over entirely by Tunisians and shake hands with innumerable Mexican fans, all of them wearing sombreros.

"Normally, Nikolskaya Street is very quiet," said Armen, an Armenian student living in Moscow who was watching highlights of the Croatia-Argentina match.

The street is usually more of a shopping destination with some luxury boutiques, especially since it was pedestrianised five years ago.

But for some reason, fans have chosen this particular street as their main hangout.

Colombian Harold Castillo, a 22-year-old student, puts its popularity down to the spectacular curtain of lights that hangs over the street.

"I came here by chance. I've been walking all over Moscow using TripAdvisor and I just saw the lights. There are other pedestrian streets but it's wonderful here."

Multiple garlands of lights hang over most of the street, giving it a festive air as soon as night falls.

Even before the World Cup kicked off, Iranian fans were rubbing shoulders with Saudis here and flag-draped fans from each South American country colonised a part of the street.

Fans are travelling great distances across Russia to follow teams -- the Peruvians went to see their team lose to France in Yekaterinburg in the Urals and the Tunisians have left for southern Volgograd to watch Saturday's game with Belgium. Yet while fans come and go, Nikolskaya has retained its vibrancy.

"This is the fans' street," said Mohamed Chaaben, a 28-year-old Tunisian engineer sitting on the terrace of a cafe with his friends, a national flag wrapped round his shoulders.

"It has the best atmosphere, it's a pedestrian street and it feels safe, there's no risk."

He and his friends were amused at the interest from locals in their national Tunisian headgear, round red caps with tassels known as chechias.

Plenty of Russians are coming to stroll on Nikolskaya Street too, eyeing the exuberant fans with a mixture of surprise and amusement.

Argentinians have nicknamed the party-zone street the "house of lights," said Santiago Saltiva from Argentina's city of Cordoba.

He said that's how he was directed there by a WhatsApp group of Argentinian fans as soon as he landed in Moscow, while he has not heard of the street's real name.

"They told us that all the Argentinians were here on this street," the 42-year-old businessman said.

"This street is like a Tower of Babel," he said. "Every nationality is here, every country is represented, everyone is speaking a different language."

The fans' choice of Nikolskaya Street as their main base caught the city authorities by surprise and they had to make some rapid changes. Public toilet cubicles were brought in and barriers removed.

The crowds of fans have been great news for local traders, many of whom have opted to remain open for 24 hours

"We've had to bring in staff from other branches," said Maria Kuzina, the 22-year-old manager of a cafe that is part of a large Moscow chain.

"We did predict there'd be more customers but this has been way more than we expected."

So far, despite free-flowing alcohol, the street has been peaceful with few incidents. Some unofficial street traders are coming here, most hawking the beer of World Cup sponsor Budweiser and attempting to evade the discreet but solid police presence here.

A pair of teenagers were indignant after two OMON riot police intervened to stop them selling flags to fans.