Hernandez ready to shine for Mexico on biggest stage 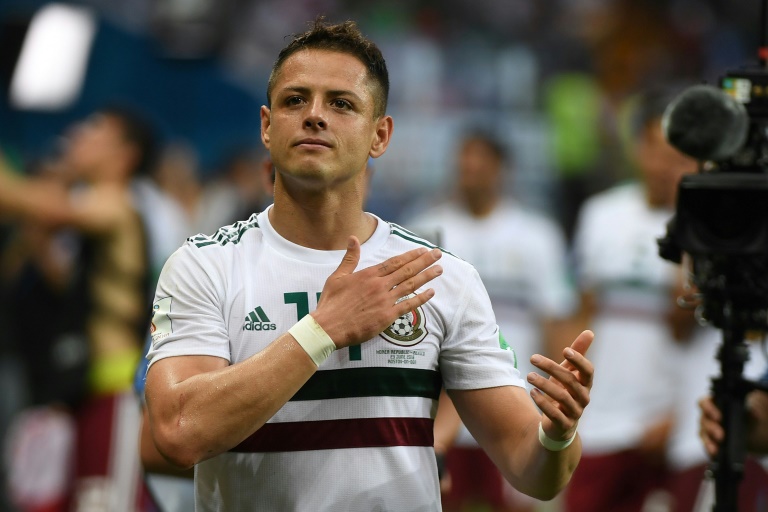 When the final whistle sounded after Mexico's historic World Cup victory over Germany in Moscow's Luzhniki Stadium, star striker Javier Hernandez, roared on by 30,000 compatriots, dropped to his knees and burst into tears.

It was El Tri's first win over the four-time champions at a major tournament and Hernandez, having played one of his best games in the green of Mexico, allowed himself the briefest of dreams.

"Why can't we do a Greece at the Euros or a Leicester in the Premier League? Think big, damn it!" he said this week ahead of Mexico's Group F decider against Sweden.

"We want to accomplish the impossible."

The surprise package of this World Cup for many, Mexico sit top of their group with six points, but still need a result in Yekaterinburg on Wednesday to guarantee a place in the last 16.

When it comes to Hernandez, whose career has kindled for so long without ever truly igniting, there is a sense that he may finally be ready to take his place among the game's greats.

He set up Hirving Lozano's winner against Germany and bagged himself a goal in the 2-1 win over South Korea to put Mexico on the brink of the knockout stage.

Looking at Mexico play this tournament, all boundless pace and direct attacking, it is easy to forget that the national side came to Russia buffeted by scandal.

On June 5, just days before the tournament began, gossip magazine TVNotas reported that nine members of the squad had an all-night party with a group of 30 prostitutes after their farewell home match that weekend.

The public condemnation and online mockery was blistering.

As the scandal swirled, midfielder Hector Herrera asked for a leave of absence from training in Denmark to travel to Portugal, where he is based, and tend to "personal matters", according to media reports.

It was Hernandez who moved to try to quell the storm, posting a video that he said proved the team "didn't do anything bad" -- though he admitted, "I don't think we'd do it again".

Hernandez, known by his nickname 'Chicharito', played over 150 games in five seasons for Manchester United but his career stalled after an indifferent loan move to European giants Real Madrid.

Despite his obvious eye for goal, he struggled last season to break into the first team at West Ham United.

But in the national shirt his game has surged ahead. His goal against South Korea was his 50th for Mexico -- more than any other player.

And his performances in Russia have been a world apart from his sometimes lifeless substitute appearances at the London Stadium.

"I had cramps in places where I didn't even know you could get cramps," he joked after the Germany game, a sign of his evident exertion.

"At the final whistle, I reacted like the person I am. I'm emotional," he told AFP after the win. "In the changing rooms some were laughing, others were yelling.

"I celebrated my way and I was the one who cried the most."

A goal against the Swedes will make Hernandez Mexico's most prolific player in World Cups -- he's currently level with Luis Hernandez on four.

But in Sweden, Mexico face a side that are tough to break down and against whom Germany needed an injury-time Toni Kroos wonder-strike to come from behind to win 2-1.

"We still have not qualified but who would have said we would have six points by now?" asked Hernandez.

"I try to look at life as a great opportunity, it is going to be a great match."