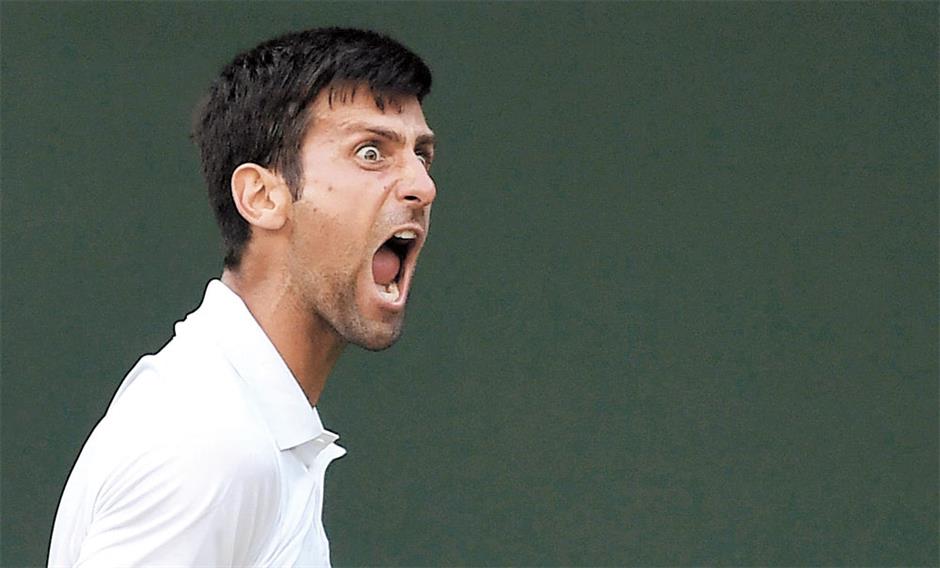 Novak Djokovic reacts after beating Britain’s Kyle Edmund in the Wimbledon third round at the All England Club in London on Saturday. The Serb won 4-6, 6-3, 6-2, 6-4 and later lambasted the Centre Court crowd for their heckling and boorish behavior. The ex-world No. 1 will next take on Russian Karen Khachanov.

On the 10th anniversary of the 2008 Wimbledon men’s final that is widely considered the ‘greatest ever tennis match’ it seems like the stars may be aligning for Roger Federer and Rafael Nadal to meet in another mesmerizing epic.

The pair are again the two best players in the world and have split the last six Grand Slam titles between them — taking their combined haul to an incredible 37 major titles.

But, most importantly, they are fit and healthy at the same time and showing signs that a blockbuster rematch might be on the cards come July 15 as they have both reached the fourth round at the grasscourt championships in London without dropping a set.

So while tennis fans around the world start dreaming, hoping and longing that the two most successful players on planet tennis will renew their rivalry on the sport’s greatest stage, there is one person who is definitely not keen on the idea.

“If I am in the final, I prefer to face an easier opponent. I am not stupid,” world No. 1 Nadal said on Saturday to hoots of laughter from reporters.

Since reaching his fifth final at the All England Club seven years ago, it has not been a happy hunting ground for the 2008 and 2010 champion as he has failed to get past the fourth round.

The Spaniard has lost to players ranked 100 or lower in four of his five previous Wimbledon appearances as his patched up knees have struggled to cope with the constant bending required to handle the low bounce on the lush green lawns.

Whereas once he could hypnotize Federer into defeat — holding a 23-11 win-loss record, including 8-2 in Grand Slam meetings contested up to 2016 — the Spaniard has lost four successive matches to his great rival over the past 18 months.

That run, which kicked off with Federer, who is now 36, winning a pulsating five-setter at last year’s Australian Open final, has allowed the eight-time Wimbledon champion to narrow Nadal’s head-to-head lead to 23-15.

But after hoisting the French Open trophy for a record 11th time less than four weeks ago in Paris, Nadal seems energized at the prospect of completing the Roland Garros-Wimbledon double for the third time in his career.

“For me it’s great to have all this great experience again, playing so well later in my career, having a great year last year, having a good year this year,” said the 32-year-old, who has been plagued by a series of knee, wrist and hip injuries.

“All these problems that I am going through during my career... makes me enjoy more the good moments. I am playing well. I’m looking forward to keep playing well.

“If I am in the final, it will be great news,” he added with a grin ahead of his fourth-round tie with Czech Jiri Vesely.

He would just rather not see his familiar Swiss foe, who next meets Frenchman Adrian Mannarino, across the net.

Playing doubles together, however, is a much more appealing prospect. “Why not?” said Nadal. “(If) he is able to do it, I am able to do it,” he added with a smile.