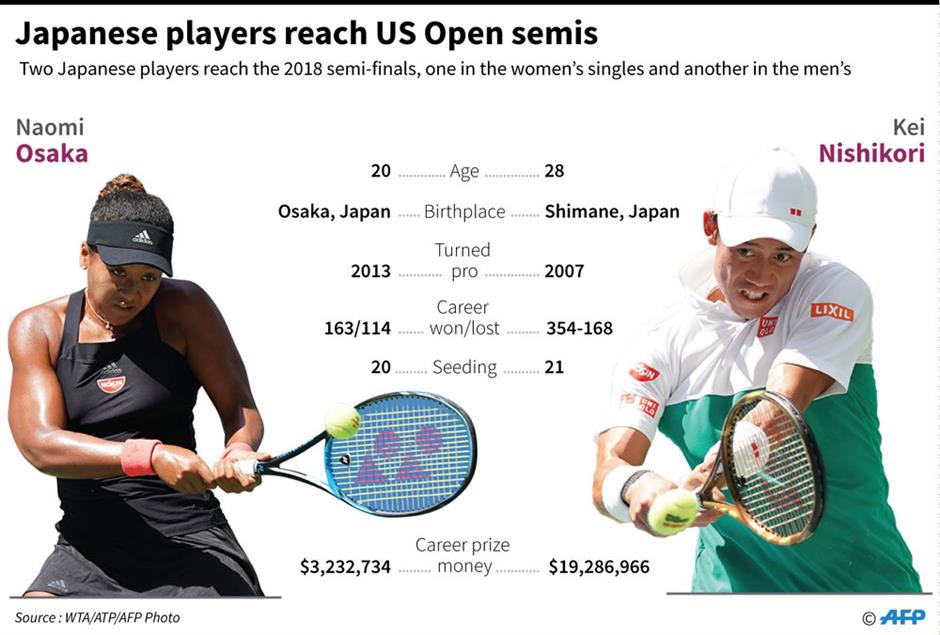 Japanese media and fans yesterday rained down superlatives on tennis stars Kei Nishikori and Naomi Osaka who made history by both reaching the US Open semi-finals.

“There is no stopping the Japanese players,” screamed the Nikkan Gendai tabloid, after the pair became the first from the country to secure semi-final berths in both singles competitions during a Grand Slam. Particular praise was heaped on 20-year-old Osaka, who became the first Japanese woman to get into the top four at the US Open.

The last Japanese woman to achieve a Grand Slam semi-final was Kimiko Date at Wimbledon in 1996 — a year before Osaka was born.

“Osaka was in full throttle from the start,” Nikkan Sports said of her 6-1, 6-1 quarterfinal victory over Ukraine’s Lesia Tsurenko. “She showed her strength and accuracy, as well as a cool intellect to predict how her opponent would move.

“She has taken a step into uncharted territory for Japanese women in New York.”

Osaka’s feat was credited with lifting the share price of her racquet producer Yonex, which soared more than 10 percent on the Tokyo Stock Exchange while the headline Nikkei index sank.

Meanwhile, Nishikori’s victory over Marin Cilic was seen as sweet revenge for the 2014 US Open final, which ended in victory for the giant Croat.

Nishikori next faces Novak Djokovic, while Osaka will play Madison Keys from the US.

World number one and defending champion Rafael Nadal will put his weary body on the line against a merciless Juan Martin del Potro today with a place in the US Open final at stake.

Nadal, the three-time champion, faces 2009 winner Del Potro and is two wins from clinching an 18th Grand Slam title. That would be just two behind Roger Federer and with an 11-5 career head-to-head advantage over the giant Argentine, he would usually be a comfortable favorite. But this has been an unpredictable US Open with Federer knocked out by Australian world number 55 John Millman in the fourth round and Nadal coming close to joining his greatest rival at the exit door.

Whoever gets through will have yet another major challenge on their hands in Sunday’s final where either Novak Djokovic or Nishikori will await.

Now, in his seventh semifinal at the US Open, Nadal is braced for another marathon with Del Potro, the third seed.

“It will be a very tough one. Juan Martin is a great player everywhere,” said Nadal who will be playing in a seventh semifinal in New York.

“But the challenge of playing him on hard of course is even higher for me personally than playing against him on clay.”

Del Potro has unleashed 66 aces and spent three and a half hours fewer on court than Nadal.

The 29-year-old is in his third semi-final at the US Open and sixth at the majors. That figure would have been higher had he not missed 14 Grand Slams in his career due to a series of wrist surgeries.

“It could be another big battle just as at Wimbledon,” said Del Potro.

“I like to play always with the No. 1 of the world, doesn’t matter the tournament or the conditions or the weather.”

Meanwhile, two-time US Open champion Djokovic will be playing in his 11th consecutive semifinal in New York, just two months after defying the odds to lift a 13th major at Wimbledon.

The 31-year-old Serb holds a 14-2 advantage over Nishikori including wins at Wimbledon and Rome this year.

“When Kei is on, he’s a top-five, top-10 player,” said Djokovic. “He has a great two-handed backhand, great footwork and is one of the quickest players on tour.”

“2014 will always be a good memory here. It was a tough battle and it will give me good confidence, even though I don’t remember a lot of it,” said the 28-year-old after getting revenge on Cilic in the quarter-finals.