Xiong's ONE fight nixed as injured Lee pulls out 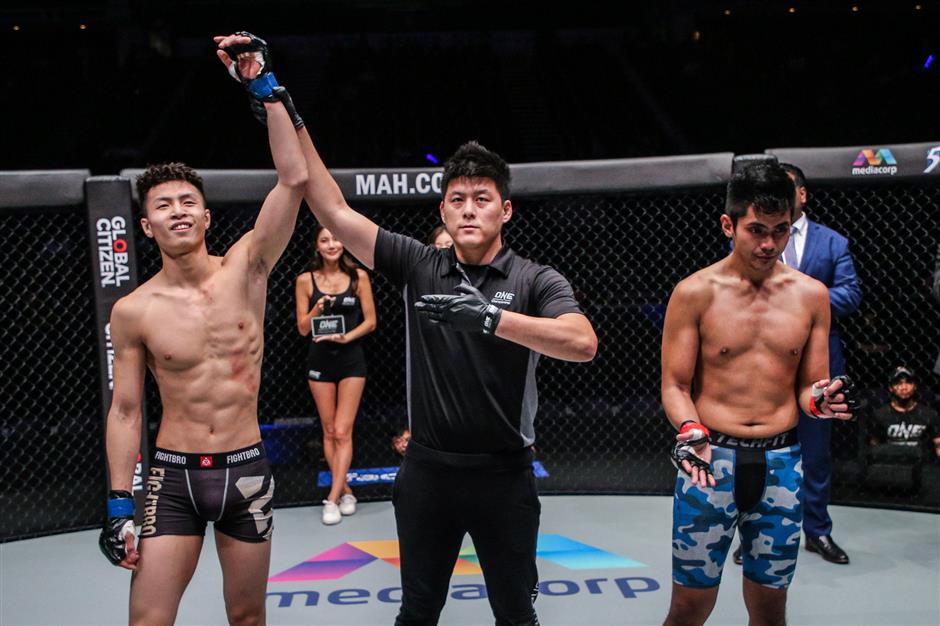 Xie Bin (left) defeated Malaysia's Hisyam Samsudin in the first round of their bantamweight bout at ONE: Heart of the Lion.

The clash had been scheduled for Friday in Singapore — Lee’s hometown — as the main event of the ONE Championship’s “ONE: Heart of the Lion.” However, Lee withdrew just days before the bout citing a back injury. Organizers were forced to change the main event and add a co-main event which featured Lee’s brother Christian.

Xiong called the pullout news a huge pity but empathized with Lee. “I think she didn’t want to give up either, and injury is something no athlete wants to encounter. I can understand it, though I did a lot of preparation for this fight. I hope she can recover soon and we can schedule a fight again,” Xiong said.

Xiong became China’s first gold belt holder in the championship in January. She defended her strawweight title in Shanghai in September with a technical knockout victory over Brazilian challenger Samara Santos.

Xiong’s solid performance has attracted an increasing number of Chinese followers to the sport, and ONE is trying to lure more fans in Asia. According to ONE Chairman and CEO Chatri Sityodtong, the championship has drawn 25 million viewers for an event shown globally last week.

After signing new fighters Demetrious “Mighty Mouse” Johnson and Eddie “The Underground King” Alvarez, ONE is hoping to further boost its influence, with Chatri announcing that ONE will launch ONE eSports in 2019, in partnership with Japan’s Dentsu Inc. Some US$50 million is expected to be invested in the new eSports championship series.

“We see a natural crossover between martial arts and gaming fans in Asia,” said Chatri. “ONE eSports aims to become Asia’s largest global eSports championship series, and will feature multiple game titles across Asia and hold eSports events alongside ONE Championship events next year.”

With the cancelation of Xiong’s bout, Xie Bin was the only Chinese fighter to appear in “ONE: Heart of the Lion” at Singapore Indoor Stadium and he subdued his Malaysian opponent Hisyam Samsudin in the first round of their bantamweight bout.

ONE Championship will have a 30-event schedule in 2019 across Asian cities, including Shanghai, Beijing, Singapore, Bangkok, Tokyo, and Seoul.