An Indian rescue mission seemingly tailor-made for Virat Kohli instead fell to Cheteshwar Pujara who took his captain's 'Superman' cape and struck a vital century to save the tourists on day one of the series-opening test against Australia.

After Kohli was swept away for just three runs in a maelstrom of dismal shot-making, Pujara carved out a sparkling 123 to guide India to 250 for nine at stumps on a scorching hot day at the Adelaide Oval.

Battling a hamstring strain in the final session, the 30-year-old Saurashtra player produced a masterclass in game management through his 246-ball knock.

Watchful early against Australia's vaunted pace attack, he then hammered them around the ground with an assault on the second new ball late in the day.

It took a brilliant piece of fielding by Pat Cummins to remove Pujara with the last ball of the day, the paceman finding the energy to swoop in and throw down the stumps despite bowling 19 overs in the stifling conditions.

Though disappointed, Pujara strode off to a standing ovation in the terraces having steered India to a defendable total after it was reduced for 41 for four in a disastrous first session.

"It was one of my top innings in test cricket, I could say top five," the Indian No. 3 told reporters after a knock of seven fours and two sixes.

"I think it was tough considering the weather, it was quite hot, we are used to it in India but still it was hot and humid."

Tim Paine's Australia will have felt hugely relieved to see the back of Pujara on this day at least.

The batsman has been a thorn in the side since his 2010 debut against Ricky Ponting's team in Bangalore, when he scored a second-innings 72 to steer India to a seven-wicket victory.

He has since feasted on a string of Australian teams, scoring 204 against Michael Clarke's side in the 2013 Hyderabad test and 202 in Ranchi against Steve Smith's men last year.

But his first ton on Australian soil may feel the sweetest, especially after his disappointing first tour in 2014/15, when India lost 0-2 despite a mountain of runs from Kohli.

India's talisman Kohli was also removed by inspired fielding, with Usman Khawaja pinching a stunning one-handed catch with a full-stretch leap in the gully.

Kohli was among five of India's top six batsmen to give up their wickets with loose shots, leaving Pujara to salvage a total from the rubble.

"To be honest we should have batted better but they also bowled well in the first two sessions," said Pujara.

"And I knew that I had to stay patient and wait for the loose balls but the way they bowled, they bowled in the right areas.

"I also feel our top order should have batted better but we'll learn from the mistakes and put up a better show in the second innings." 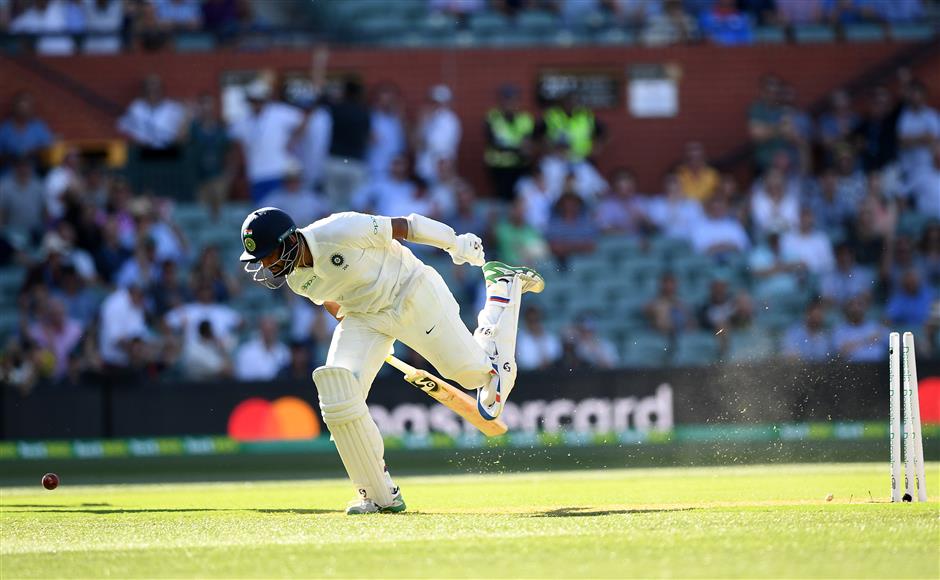 India's Cheteshwar Pujara is run out on the last ball of the day on the first day of the first test match against Australia at the Adelaide Oval in Adelaide, Australia, on Thursday.