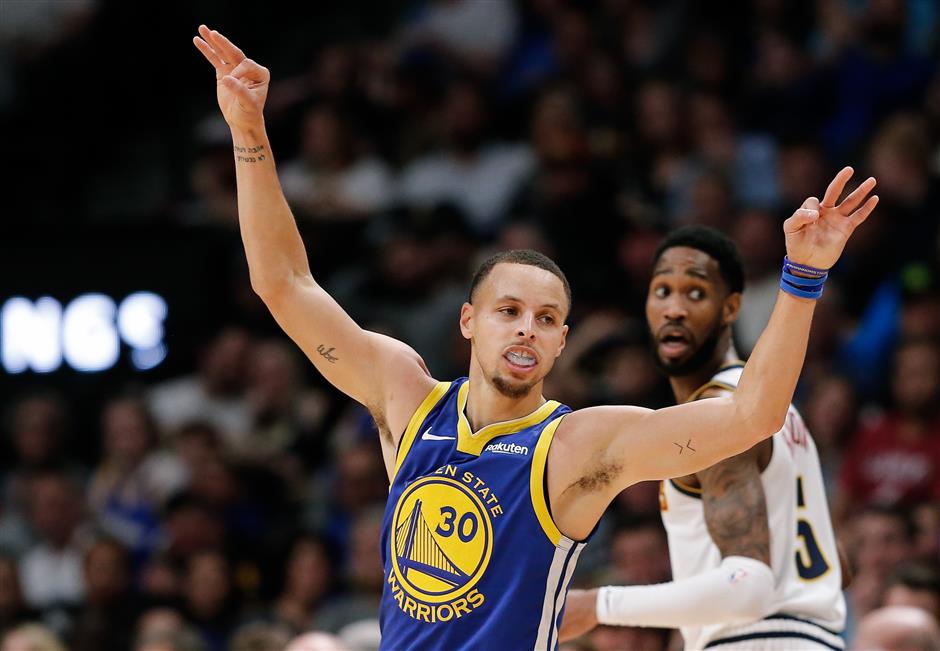 Golden State Warriors guard Stephen Curry motions after a play in the third quarter of their NBA match against the Denver Nuggets at the Pepsi Center in Denver, Colorado, on Tuesday. The Warriors won 142-111.

National Basketball Association teams piled up the points like they hadn't done in 35 years.

Three teams scored 140 points on Tuesday night, with the Golden State Warriors setting an NBA record by pouring in 51 during the first quarter of their victory over Denver.

The Warriors went on to a 142-111 win that moved them ahead of the Nuggets into first place in the Western Conference.

"They made a lot of shots, to be honest," Denver's Nikola Jokic said. "They played really good basketball at a high level."

And that wasn't even the biggest total of the night.

"Tonight the shots just kept falling," said Atlanta's Trae Young, who was referring to the Hawks' game but could have been talking about a few of them. "When you see the ball go in like we did tonight, I think it just keeps rolling."

Philadelphia went for 149 in a 42-point rout of the Minnesota Timberwolves in the first meeting between the teams since the Jimmy Butler trade. The 76ers had 83 at halftime, second-highest total in the NBA this season, and Butler wanted more.

"Look, I'll tell you right now, when I went into halftime I said, 'We're not giving up this lead. We're going to build upon it'," Butler said.

They did, making a team-record 21 3-pointers and reaching their highest point total in the 22-year history of the Wells Fargo Center.

The Hawks beat Oklahoma City 142-126 as Young had 24 points and 11 assists, looking like he did when he became the first Division I player to lead the nation in both categories in the same season during his lone year at Oklahoma.

"What did we score tonight, 126 points?" Thunder coach Billy Donovan asked. "That should be good enough for us to win."

Not on this night.