Squash queen David to retire at end of season

Eight-time world champion Nicol David has announced she will retire at the end of the 2018-19 squash season, bringing down the curtain on the Malaysian's illustrious career.

The 35-year-old is the most successful woman squash player of all time and spent an unprecedented nine years as world No. 1 between 2006 and 2015.

David said she had thought long and hard about calling it a day.

"This decision has been thought through for quite some time and I do know that this is my last season," David said in a statement posted late on Monday on the website of the Professional Squash Association, the sport's governing body.

"My mind and body have battled it out to stay at the very top of my game for such a long time that I feel that I only have this last big push left for the final season to give it all I have before I enter the next phase of my life."

David's reign atop the PSA world rankings came to an end in September 2015, but she continued to break records, achieving the longest unbroken run inside the world's top five at 143 months.

David's final tournament will either be the British Open in Hull in May or the following month's World Tour Finals if she qualifies.

"She gave it all. When you come to her age in any sport, you probably have given it everything," David's father Desmond was quoted as saying by The Star newspaper.

David, who won her first Asian Games gold in 1998 at the age of 15, also said that she will continue to work closely with the PSA to raise the awareness of squash globally in an apparent reference to efforts have the sport admitted to the Olympics

In 2012, David said she would trade all her titles for an Olympic gold medal. Bids by squash to be admitted to the Games have been rejected three times by the International Olympic Committee.

"Nicol is undoubtedly one of the greatest squash players of all time and her presence on the tour will be sorely missed," said Alex Gough, the PSA chief executive.

David, seeded 13, will on Saturday begin her quest for a ninth crown in Chicago in her final World Championship. 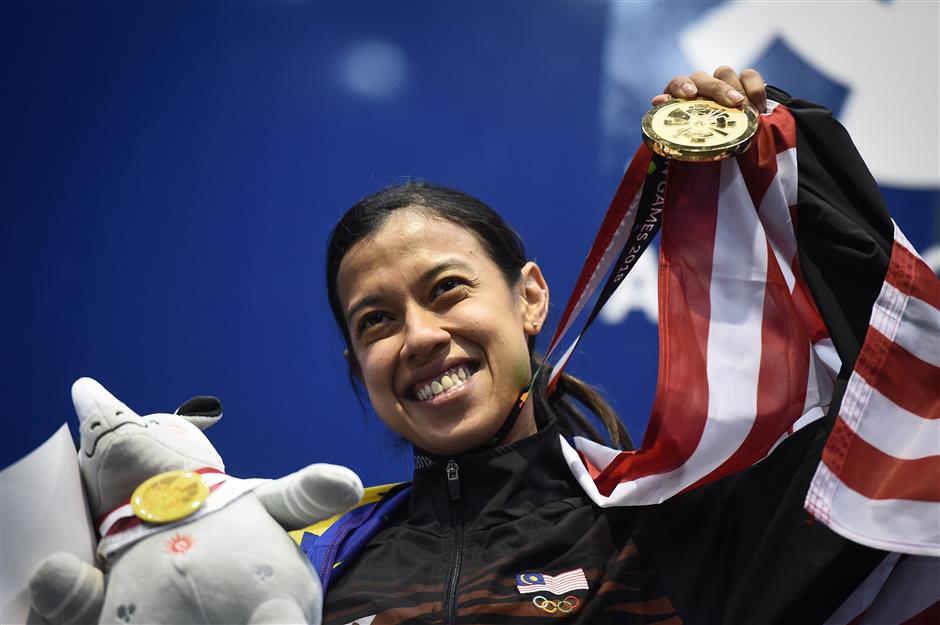 Malaysia's Nicol David holds up her gold medal during the awards ceremony for the women's singles squash event at the 2018 Asian Games in Jakarta, Indonesia, in this August 26, 2018, photo. The eight-time world champion announced she will retire at the end of the 2018-19 season.