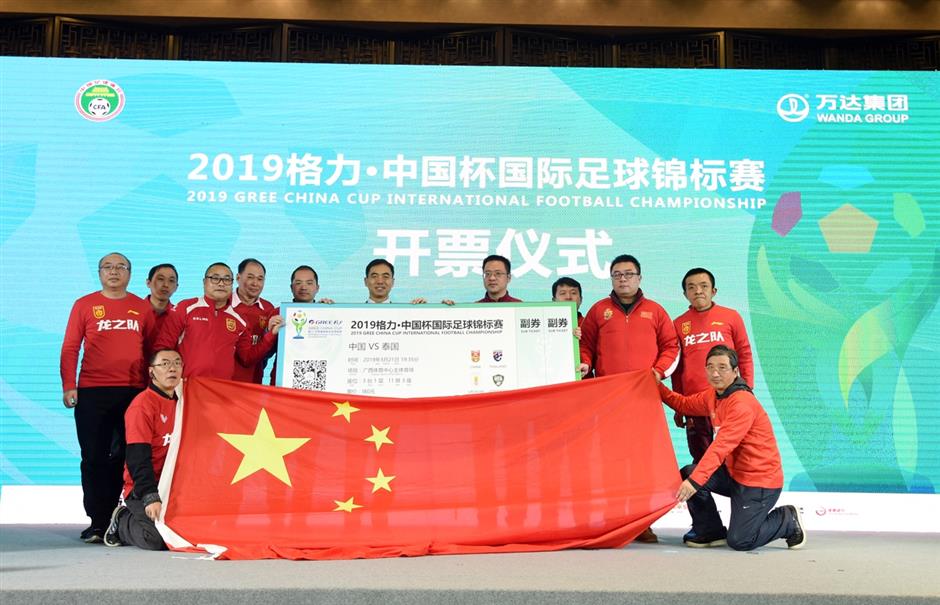 Organizers of the 2019 China Cup Football Championship announced the start ticket sales for the tournament during a media conference in Shanghai on Thursday.

China will take on Uruguay, Uzbekistan and Thailand during the 2019 China Cup International Football Championship, which will be held in Nanning, southern Guangxi Zhuang Autonomous Region, from March 21 to 25, organizers announced in Shanghai on Thursday.

Fans will get the chance to meet Uruguayan star players, including Barcelona striker Luis Suarez, as well as an old acquaintance in Uzbekistan captain Odil Ahmedov, who plays for Chinese Super League defending champion Shanghai SIPG.

Jointly organized by the Chinese Football Association, the Guangxi Sports Bureau and the Wanda Group, this year’s China Cup will serve as a warm-up tournament for the Chinese national team. The national team is yet to name a head coach following the departure of Italian Marcello Lippi. Its major focus this year will be the 2022 World Cup Asian qualifiers, which kick off in September.

According to the China Cup schedule, China will take on Thailand in the first match on March 21. The teams met during the Asian Cup in the United Arab Emirates last month when China emerged victorious. If it can repeat the victory, China will be able to advance to the tournament's final for the first time.

China lost 0-6 to Wales, led by Gareth Bale, in the opening match of last year's tournament, in which the other two teams were Uruguay and the Czech Republic. In 2017, the four teams that took part in the inaugural tournament were China, Croatia, Iceland and Chile.

This year, the opponents appear to be less competitive compared to the previous two years. The tournament is therefore considered by some domestic media as a good opportunity for China to revive its self-confidence after a disappointing performance at the Asian Cup.

Also, taking on Asian opponents of Thailand and Uzbekistan will help China to be better prepared for the World Cup Asian qualifiers later in the year, organizers said.

Tickets for the tournament are now available at www.damai.cn, with prices ranging from 80 yuan (US$12) to 668 yuan.