Carey hints that China could stage a second race

The Formula One Chinese Grand Prix has come a long way since it first staged the race in 2004. From building the challenging 16-corner track to cultivating a culture of racing among fans and ensuring ease of transport to the venue, local promoter, Juss Event, has left no stone unturned in ensuring the success of the sport over the past 15 years.

It is fitting, therefore, that the Formula One owners have chosen the 16th Chinese Grand Prix for their 1,000th race — an achievement of epic proportions. In this exclusive interview with the sport’s chairman and chief executive, Chase Carey, ahead of the historic race, the American spells out the plans for China and the possibility of two F1 races on the mainland in the future.

Q: Shanghai will be hosting the 1,000th race in F1’s history. Your thoughts on that?

A: 1,000th Grand Prix is certainly a historic moment for Formula One and we could ask for nothing better than to celebrate it here in Shanghai. It’s true that China has only relatively recently become part of our sport, but it’s also true that this great country has the potential for enormous interest, which has still to be brought to light.

The opportunity history has given us this year is really unique and we are very happy to celebrate the 1,000th Grand Prix in Shanghai. Last year, when we started to plan out the 2019 calendar, we had not the slightest doubt that to celebrate this event here was the best choice.

Q: What are your expectations for this year’s Chinese Grand Prix? Is there anything in particular you would like to address with local organizers?

A: It will be the 16th edition of the Grand Prix in Shanghai and it’s become a major fixture on the championship calendar. The promoter, Juss Event, is doing a great job and indeed the event is already a sell-out.

Furthermore, the whole city will be able to experience the Grand Prix in a special way because, while the event is on, Shanghai will host the first of four F1 festivals being held this year — the others being in Chicago, Los Angeles and Brazil.

For the first time, two F1 cars will be in action on the streets of Shanghai, giving even more fans the chance to see these amazing cars at close quarters and to experience F1 first hand. And we are especially happy that one of these cars will be driven by a Chinese driver, Zhou Guangyu, one of the rising stars of the feeder series for F1.

Q: Is it possible that F1 will stage a second Grand Prix in China? Do you have any cities in mind?

A: Right from the start, we have said that China is one of the parts of the world where we believe our sport has a great potential for growth. There’s definitely room to organize a second Grand Prix and it’s no secret that we have been in contact with various municipalities to evaluate possible locations where another race could be held.

Names? As you know we don’t like doing our negotiating in public. When we have reached an agreement, we will let everyone know. 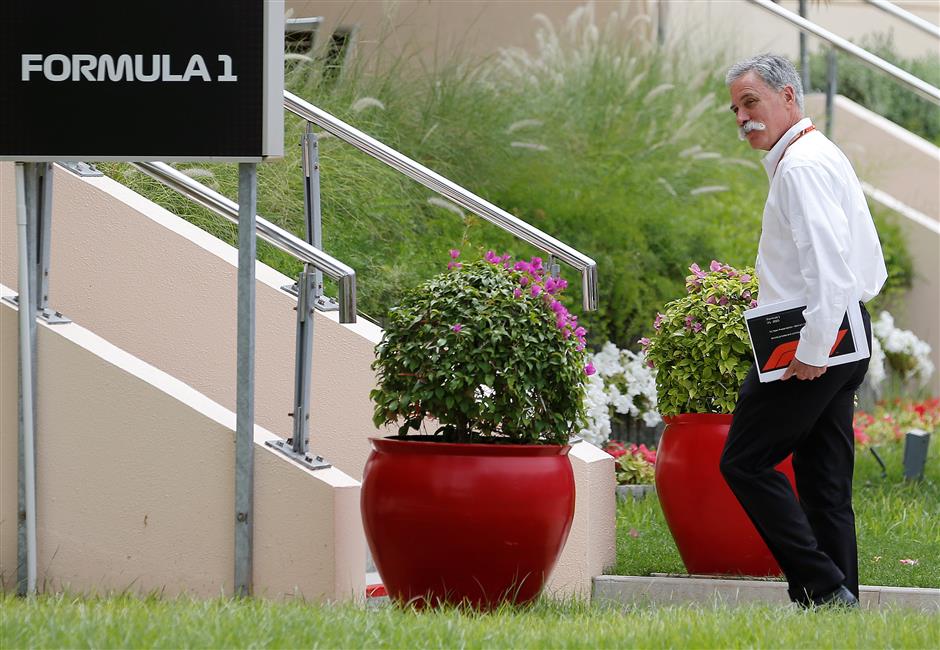 Formula One CEO Chase Carey wants the sport to grow healthily and expand its audience, while at the same time maintaining its roots as the pinnacle of sport on four wheels, both as a spectacle and technologically.

A: Just recently, in fact, we presented our overall plans for the next stage of Formula One to the teams and other stakeholders.

The content, which includes technical and sporting regulations, as well as financial plans, along with proposals for the governance of the sport and the distribution of funds, was worked out over the past months, with all the sport’s stakeholders having made an important contribution, with all parties sharing the common primary objective of putting everything in place to ensure that the world’s leading sporting brand be fan-centered, commercially successful, profitable for the participating teams, and with technological innovation at its heart.

Clearly we took into account the need to re-level the playing field, without, however, changing the essential DNA of Formula One.

Q: What are the changes you have incorporated since taking over the sport from Bernie Ecclestone?

A: I don’t like making comparisons with the past. The previous management did what was needed to make Formula One what it is, but probably, it did not keep up with the times, for example when it comes to the digital world.

We want the Formula One of the future to grow healthily, expanding its audience, and there is a huge unexploited potential, while at the same time maintaining its roots as the pinnacle of sport on four wheels, both as a spectacle and technologically.

A lot of work has been put into this and we are beginning to see the results, as can be seen from the figures for the television and digital audience, or the activities designed to bring F1 closer to the fans, such as the F1 festivals and the event that kicked off this season in Melbourne on March 13.

As for the number of races and their geographic spread, just to take an example, we believe there is still room for expansion, but it will be done gradually, at the same pace as changes to other aspects of the sport, such as the race weekend format. We never forget that this sport has its historic roots in Europe and we absolutely want to maintain that.

Maybe one of the most visible changes, but definitely not the most important, is the way in which we want to move forward with the changes. We have always preferred to talk directly to the parties concerned, be they the teams, the FIA or the promoters, about our long-term vision for transforming this sport, which we believe still has a great unexploited potential as a form of entertainment with sport at its heart.

We knew right from the start it would not be easy, partly because so many elements were missing, starting with an actual structure to look after its commercial and digital development. We also need to work together with the FIA to define the new rules, with a full awareness of the facts.

We are working in a transparent fashion, sharing our vision without imposing diktats. That’s our philosophy and we believe it’s the right one whatever others might say. For example, if you look at the promoters, never before have they been made aware of our short and long-term plans in the way that they have over the past two years, with all promoters invited to a workshop.

We have done the same with the teams and the broadcasters, the latter being another important stakeholder in this sport. We believe in the value of leadership, not dictatorship.