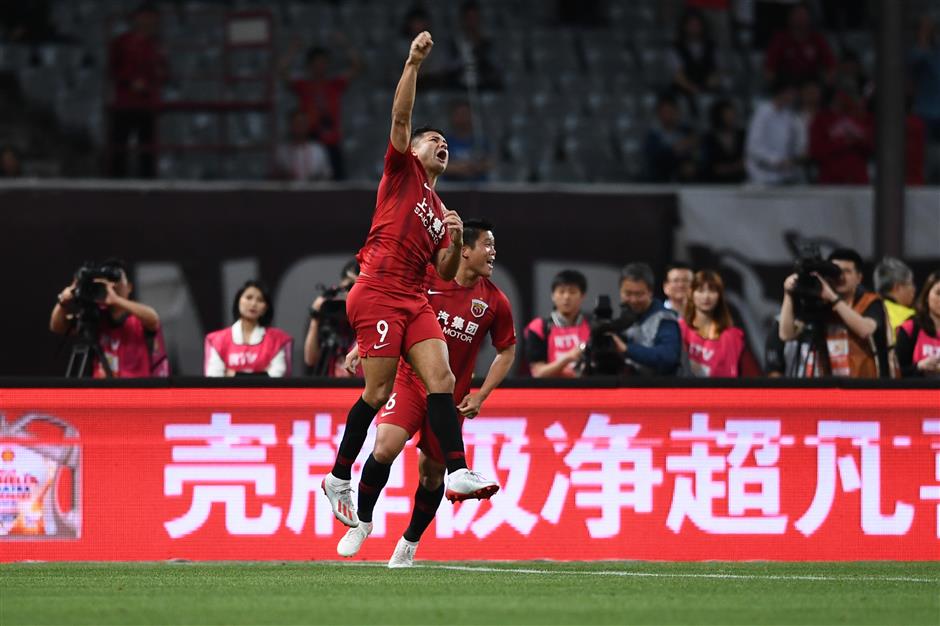 Elkeson celebrates after scoring Shanghai SIPG's equalizer against Shandong Luneng in the second half of their Chinese Super League match at Shanghai Stadium on Sunday. The hosts won 2-1.

Ten-man Shanghai SIPG beat Shandong Luneng 2-1 in the ninth round of the Chinese Super League on Sunday. The video assistant referee, or VAR, “came to the rescue” of SIPG three times through the match, including a last-minute penalty which helped the defending CSL champion grab all three points.

It was Shandong, however, which took the initiative at Shanghai Stadium, scoring in the first minute after kick-off. SIPG’s U23 defender Wei Zhen made a mistake when clearing a ball, which fell into the path of Shandong’s Brazil midfielder Roger Guedes, who beat SIPG goalie Yan Junling for the opener.

SIPG’s best chance in the first half came in the 43rd when Wang Shenchao’s close-range attempt hit Shandong’s post.

After the break, Shandong almost repeated the first-half opening when Guedes scored 49 seconds in. The goal was ruled invalid as the VAR review showed Shandong’s Jin Jingdao obstructed SIPG goalie Yan during the attack.

The situation appeared to be even less favorable for the defending champion when Wei received his second yellow card of the match in the 70th while defending Shandong’s Liu Binbin.

Despite being a man short, SIPG equalized soon afterwards as Li Shenglong’s pass found an in-position Elkeson in Shandong’s box, and the latter sent the ball into an almost empty goal in the 74th to knot the score.

Shandong almost killed the match in the last minute when Brazil defender Gil scored on Guedes’ assist in injury time. However, VAR again came to SIPG’s rescue as the review showed that Guedes was slightly offside when passing the ball to Gil.

But there was to be more drama. Deep in injury time — In the 97th minute — Shandong’s Hao Junmin was whistled for apparent handball foul in the box. VAR confirmed the foul and SIPG was awarded  a penalty. Captain Hulk did the needful from the spot to make the final score 2-1.

SIPG is now second in the CSL standing on 22 points — five points off leader Beijing Guo’an. Beijing maintained its red-hot form, easing past Shenzhen Ruby 3-0 for its ninth straight victory. In another Sunday match, Guangzhou Evergrande drew 2-2 with Jiangsu Suning to sit third in the table on 19 points.

In a Friday match, Shanghai Greenland Shenhua drew 1-1 with Tianjin Teda in an away match. Enrique “Quique” Sanchez Flores’ team is now winless in its last five matches.

In Tianjin, Shenhua conceded the opener in the 9th when Tianjin’s Brazil striker Johnathan scored with a header on Zhao Honglue’s assist. Two minutes later, Shenhua’s top scorer Odion Ighalo went off with a leg injury and he was replaced by Wu Yizhen.

In the second half Shenhua had its first sniff at goal. Cao Yunding’s long pass from midfield found captain Giovanni Moreno at the edge of Tianjin’s box. Moreno beat two Tianjin defenders and sent the ball past a static goalie Teng Shangkun for the equalizer in the 50th.

Shenhua almost lost the one point towards the end of the match when Tianjin’s Xie Weijun scored in the 83rd. But VAR review showed that a Tianjin player was offside during the attack. Shenhua is now 11th on eight points.