China pocketed one silver and one bronze medal at the 2019 Archery World Cup, which concluded at Lujiazui in Pudong New Area on Sunday.

The one-week event attracted more than 430 archers, coaches and officials from 40 countries and regions, including powerhouses like South Korea, Denmark and the United States.

China sent a squad that combined veteran archers with young blood. In the women’s recurve team competition, China’s Zheng Yichai, Long Xiaoqing and Meng Fanxu advanced to the final, where they narrowly lost to South Korea and settled for the silver medal. The country's bronze medal came in the men’s compound team competition.

In individual competitions, China’s amateur archer Luo Sha put in an impressive performance, finishing fourth in the women’s compound. The Sichuan Province native cherished the chance of competing against the world’s top archers, saying the experience would help her improve in training for the future.

It’s the 11th year that Shanghai hosted the Archery World Cup. The qualifying and knockout rounds were held at Pudong’s Yuanshen Sports Center, while the finals were held at an open-air venue set up in Lujiazui. The organizers meant to build the event into a “landscape sport” as spectators could watch the competition while enjoying the view of the high-rises in the city's financial hub.

“Hosting the Archery World Cup has helped the growth of the sport in Shanghai and China,” said Guo Bei, president of the Shanghai Archery Association. “Shanghai had just one or two archery clubs about 10 years ago. Now the figure has reached 25 and some 6,000 to 10,000 local reisdents have become regular participants in the sport.”

Meanwhile, 20 archers were invited by the Pudong New Area government for a sightseeing tour after the competition on Sunday. They visited the landmark Shanghai Tower and interacted with people on the waterfront of the Huangpu River. 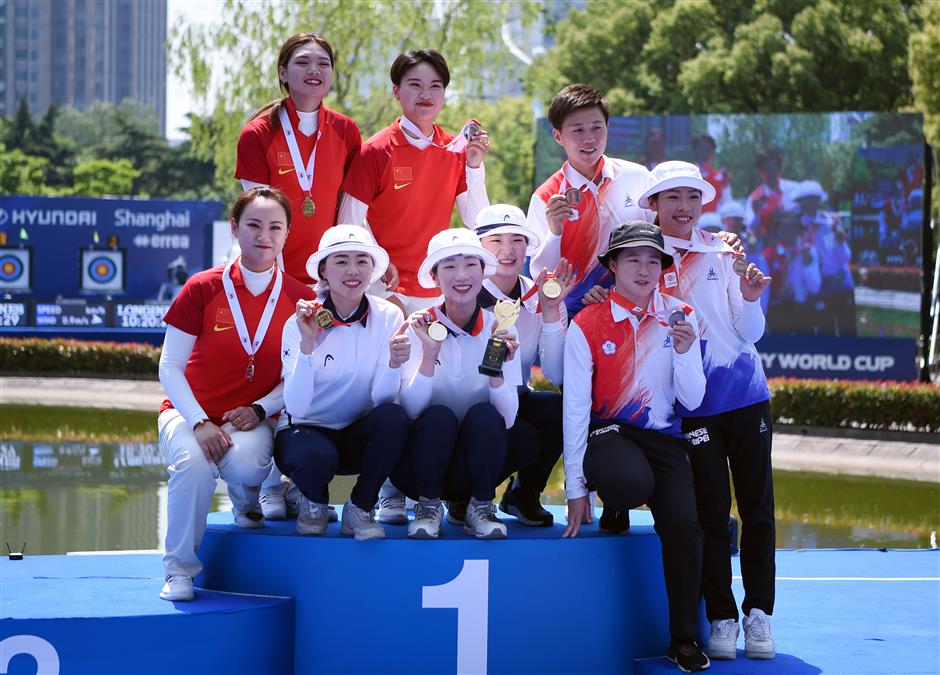 China’s Zheng Yichai, Long Xiaoqing and Meng Fanxu (on the left) won the silver medal in the women’s recurve team competition. The gold went to South Korea, with Chinese Taipei settling for bronze.