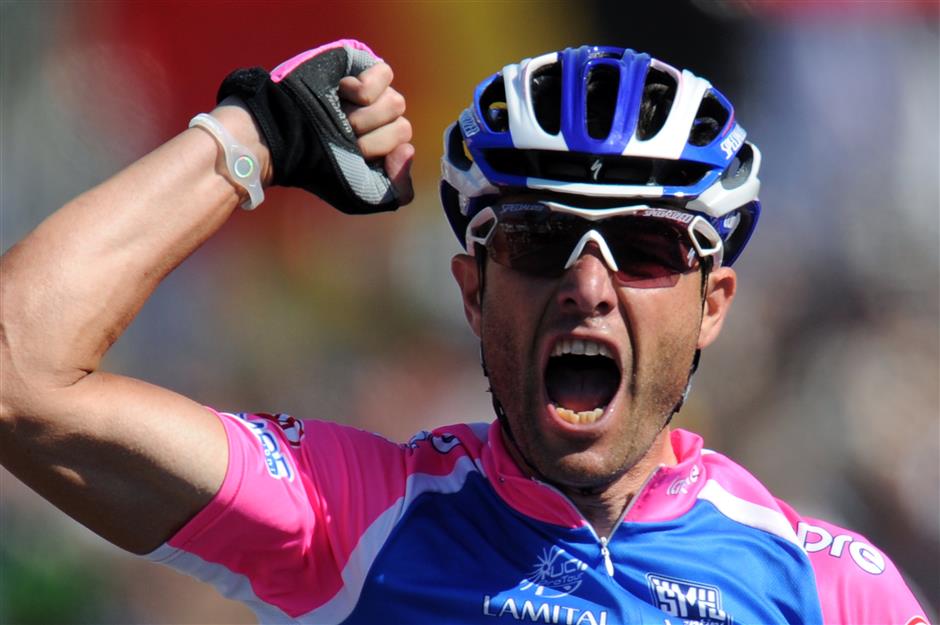 Alessandro Petacchi celebrates on the finish line in Brussels at the end of the 203.5-kilometer first stage of the 2010 Tour de France run between Rotterdam in the Netherlands and Brussels in Belgium in this July 4, 2010, photo. The Italian has been linked to the blood doping scandal around German doctor Mark Schmidt.

Retired sprinter Alessandro Petacchi was among four riders linked to a blood doping ring by the International Cycling Union on Tuesday, and another was sent home from the Giro d'Italia.

Petacchi, who won the points classification at all three Grand Tours, is suspected of using a "prohibited method" in 2012 and 2013.

The UCI said the riders are linked to the doping ring based on evidence from Austrian authorities, who are investigating illicit blood transfusions in multiple Olympic sports, called Operation Aderlass.

Petacchi is the most successful cyclist so far linked to the operation, in which a German doctor allegedly offered doping services around the world.

Two of the four were with the Bahrain-Merida team at the Giro before they were suspended. Slovenian rider Kristijan Koren was supporting of team leader Vincenzo Nibali and Borut Bozic, who retired last year, was working as a sports director.

"The team strictly advocates zero-tolerance doping policy and has therefore provisionally suspended both members concerned," Bahrain-Merida said, adding that the cases pre-dated both riders' time with the team. "We would like to stress that both cases relate to the 2012 and/or 2013 seasons. The team always carries out thorough medical checks (including biological passport check) of any new signed rider."

Besides Petacchi, Koren, 32, and Bozic, Croatian rider Kristijan Durasek was also provisionally suspended. The 31-year-old is a climbing specialist who was racing this week in the Tour of California for UAE Team Emirates.

In March, Austrian riders Stefan Denifl and Georg Preidler were suspended in the same case. The Swiss cycling federation fired retired rider Danilo Hondo as a coach on Sunday after he told German broadcaster ARD he was involved in blood doping. Athletes in cross-country skiing have also come under suspicion.

Petacchi, who has won 48 Grand Tour stages, has denied the allegations outright.

"I never had a blood transfusion and I have no idea why I'm being connected with this case," the 45-year-old, who retired in 2015 having won six Tour de France stages and 22 on the Giro, told Corriere della Sera.

Blood doping is a method whereby athletes have blood transfusions, to increase their stamina and performance, a method prohibited under World Anti-Doping Agency regulations.