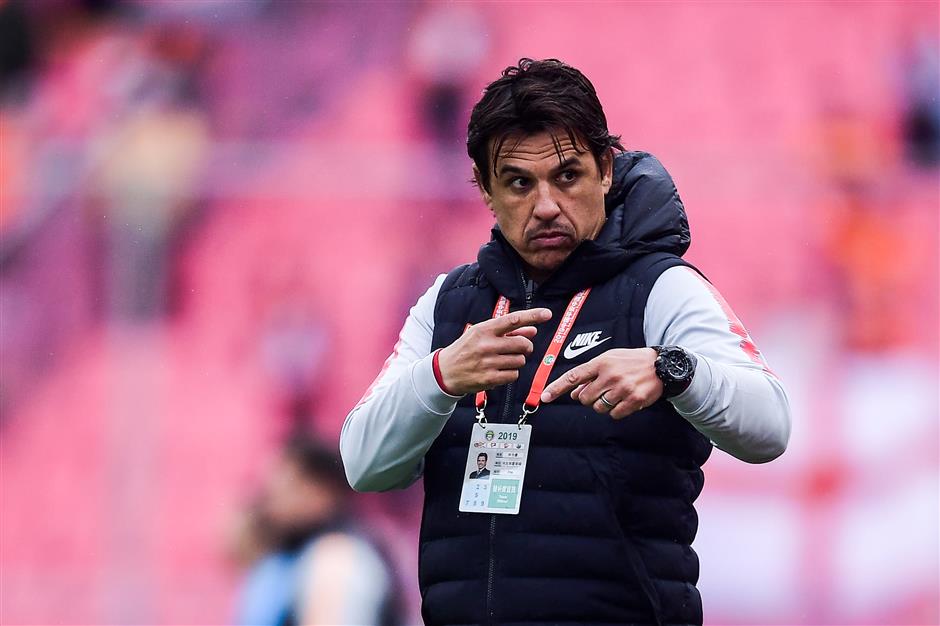 Hebei China Fortune head coach Chris Coleman reacts as he watches his players competing against Beijing Renhe during their Chinese Super League match in Langfang City, north China's Hebei Province, in this April 27, 2019, photo. The Welshman was fired on Wednesday.

Former Wales manager Chris Coleman was sacked as coach of struggling Hebei China Fortune on Wednesday after the club's fans demanded his removal.

The 48-year-old's side has won only once in nine Chinese Super League games this season and languishes one place off the bottom of the 16-team table.

A Hebei team containing former Barcelona star Javier Mascherano lost 2-3 at home to mid-table Henan Jianye at the weekend and had a player sent off for the fourth time in all competitions this year.

Above that in Chinese it read: "Coleman, your mum wants you home for dinner."

Coleman, who took Sunderland down into England's third tier in his previous job, was appointed as a replacement for West Ham United-bound Manuel Pellegrini in June last year.

But despite guiding Hebei away from the relegation zone last year, he won only seven of his 28 games in total.

"After friendly negotiation and agreement reached between the two parties, with immediate effect, Mr Chris Coleman will no longer serve as head coach of Hebei China Fortune Football Club," the club said in a statement on the Twitter-like Weibo.

"We sincerely thank Coleman for his hard work and contribution to the team and wish him all the best in his future work and life."

Coleman's wife Charlotte, a television presenter, defended his record and said in a tweet that was later deleted: "We hoped to leave before the season started but were not allowed to, after losing players and not being allowed to sign any replacements."

It was the first coaching casualty in the CSL this season. Coleman has been replaced on an interim basis by caretaker coach Xie Feng.

Coleman was a defender for Crystal Palace, Swansea City, Blackburn Rovers and Fulham during his playing days, and later became the manager of then-English Premier League side Fulham.

He spent four years in the hot seat at Craven Cottage and then had a spell with Real Sociedad in Spain.

But he enjoyed his most successful time in charge of his native Wales, taking it to a shock semifinal place at Euro 2016.

His sacking at Hebei comes as little surprise.

After a 0-2 defeat to Marouane Fellaini's Shandong Luneng earlier this month, Hebei issued an open letter to fans apologizing and saying that it has been "the toughest start (to a season) in the club's history".

"We let you down and we can't make any excuses for the recent performances," said a statement.

Hebei, which is above rock-bottom Beijing Renhe only on goal difference in the CSL, travels to seventh-placed Tianjin Teda on Sunday.