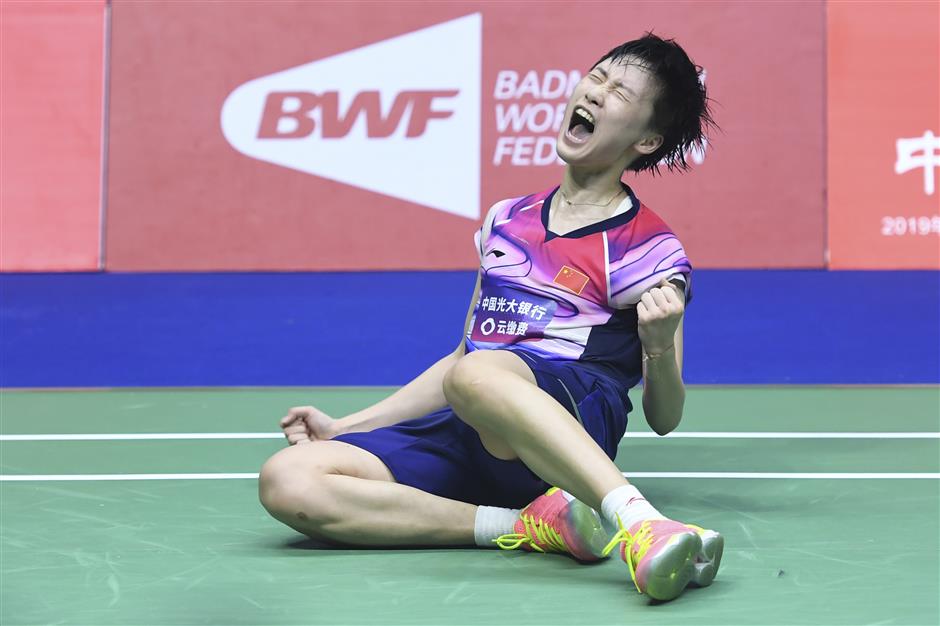 Japan has never won the badminton mixed-team world championship and its search goes on after it was well beaten 0-3 in the southern Chinese city of Nanning.

China's dominant victory over the top seed is an ominous indication of the depth the country possess in its ranks with next summer's Tokyo Olympics on the horizon.

Roared on by the home crowd, China went 1-0 up through its men's doubles and then took a 2-0 lead after a captivating women's singles match between Chen Yufei and Akane Yamaguchi.

Japan needed its talisman Momota to beat Shi in the men's singles to keep the tie alive.

It looked like more of the same when the 24-year-old Momota won the first game 21-15, but Shi suddenly found his rhythm and his subdued Japanese rival faded spectacularly.

The 23-year-old Shi raced to the second game 21-5 and took that searing momentum into the decider, winning the third game — and with it the Sudirman Cup — 21-11.

Shi sealed the championship with a smash and was mobbed by his teammates, who raced onto the court after his surprise win.

"I failed to get myself into the match quickly and my tactics weren't quite proper either in the first game," Shi said. "But I made consistent attacks and kept my offense flowing in the next games."

China, the long-time pre-eminent power in badminton, reclaimed the trophy that it lost to South Korea two years ago.

Li Junhui and Liu Yuchen won China the opening point in the men's doubles by beating Hiroyuki Endo and Yuta Watanabe 21-18, 21-10 in 54 minutes.

"My performance was a little up-and-down. In the first game we played well but our opponents started catching up as their service gave us a little trouble," said Li.

Partner Liu said their performance was quite good overall, saying: "We were ready to attack from the beginning, and the first game was a tough one as everybody knows that the eventual winners are usually the ones who win the first game."

Next, world No. 3 Chen rallied from one game down to turn the tide for the hosts overwhelmingly, winning the women's singles 17-21, 21-16, 21-17 in one hour and 21 minutes against 4th-ranked Akane Yamaguchi, who took the last six points in a row to take the first game.

Yamaguchi, who conceded to 2012 London Olympic winner Li Xuerui in the 2015 Sudirman Cup final, lost to the 2018 All England Open champion Chen this time.

For Chen, Yamaguchi did a quite a good job. "She is fast and quite energetic and put a lot of pressure on me," Chen said. "Yet I kept telling myself to hang in there. I'm glad I won it."