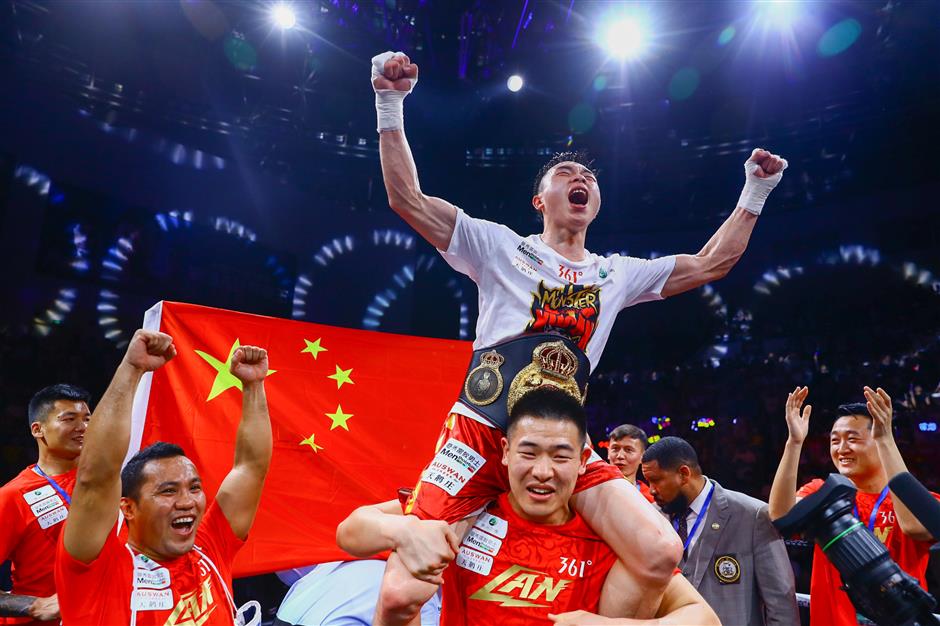 Xu Can successfully defended his WBA featherweight title after beating Shun Kubo by a technical knockout.

Xu Can was crowned the new icon of China’s boxing after a successful maiden defense of his WBA featherweight gold belt in his hometown of Fuzhou, Jiangxi Province, last weekend.

The 25-year-old beat challenger Shun Kubo from Japan by a six-round technical knockout during their 12-round bout at Fuzhou Gymnasium.

Having presented a good display of both attacking and defense skills, Xu’s combinations to the body and face put his 29-year-old opponent on knees in the fifth round.

Xu’s aggressiveness carried on in the sixth round and referee Gustavo Padilla had to intervene and stop the action one minute and 16 seconds into the bout to protect Kubo.

The three judges had Xu ahead in all five rounds with a total of five-point advantage (50-45) over Kubo.

“I felt some pressure before the fight, as my opponent is taller and has a better arm span, and he is a lefty. But my preparation was good,” Xu said after the fight. “I was confident of myself, but did not expect a TKO. I was just telling myself to approach steadily.

“Power has been my drawback, which I will continue to work hard and improve.”

His opponent Kubo, holding an impressive record of 13-1-0, 9KOs, was also impressed by Xu’s performance.

“I know he has good mental power, but when I was attacking, he did not shrink back or tried to get out of way at all, which really surprised me,” said Kubo.

His dominant performance was not only a boost to the confidence of his team and promoters, but also a cardiotonic to China’s boxing, as the country has made very limited impact in the sport on the world stage.

“China has me. I am Can, so I can,” an excited Xu echoed the enthusiastic home crowd with his stimulating personal slogan after being announced as the winner. 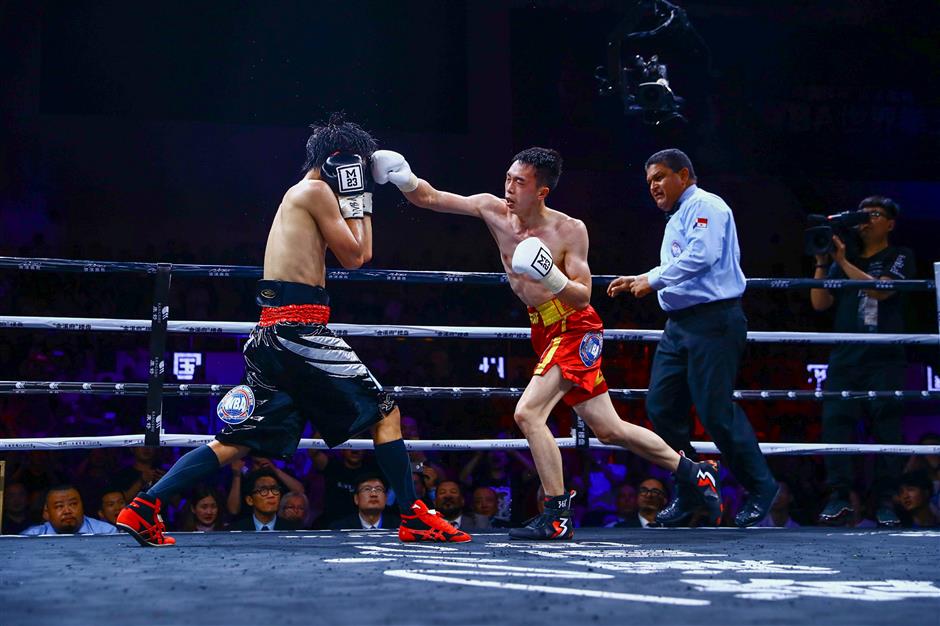 Xu Can (right) and Shun Kubo in action. Xu displayed a solid approach of both attacking and defense skills.

The 5,000-seat gymnasium was packed with his supporters, including hundreds of fellow-villagers from Zixi County where Xu was born.

It was said to be the highest-level sporting event ever hosted by Fuzhou, a fourth-tier city in China.

Xiong, who is also in contract with Xu’s local promoter, Max Power Promotions, witnessed the fight himself.

The Beijing-based company owns an “M23 team” with contracted boxers like Xu, Xiong and Japan’s Sho Kimura, who beat Zou in Shanghai two years ago for the World Boxing Organization flyweight title.

“Winning a gold belt is the beginning of a career for a professional boxer, who shall expect an even tougher road ahead,” said Xiong.

“I started my career early, while Xu’s youth is his biggest advantage. I hope he will seize every opportunity and stay hungry for victories.”

“This is just the beginning and we are making bigger plans and will arrange bigger fights for Xu,” said Roberto Daiz, matchmaker of Golden Boy Promotions. “Back in January, we saw a champion. Today, we witnessed the birth of a star.”

Like a lot of professional boxers, Xu picked up boxing because of his passion for the sport, as well as the determination to change fate and improve life for his family.

Xu’s father was a boxing enthusiast, who stimulated Xu’s interest toward boxing from a very early age.

Xu started training at a boxing club in Yunnan Province at the age of 16 and turned professional in 2013.

He has been considered a smart and technical boxer who is good at counterattacks.

Xu is not from a well-off family. His father worked as security guard in a park while his mother is a sanitation worker.

“After three years of training, I didn’t get many competition opportunities and obviously there was no income,” said Xu. “Life was a bit hard at that time, but I just insisted training with the support of my family.

“Days after days of training can be boring sometimes, but that’s temporary, as I have the responsibility to support the family. I have been giving all my income to my parents.” 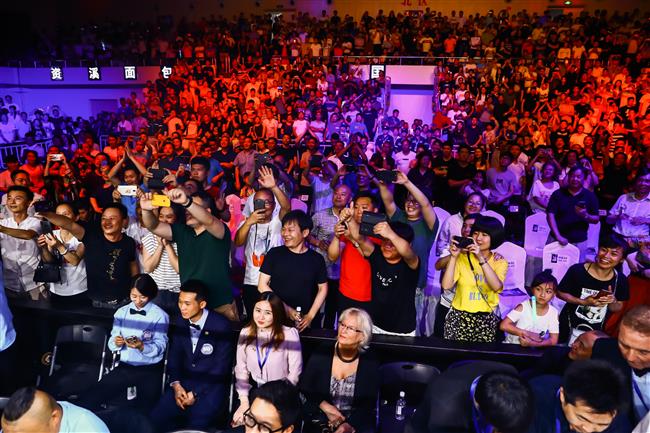 The 5,000-seat Fuzhou Gymnasium was packed with Xu's supporters, including hundreds of fellow-villagers from Zixi County where Xu was born.

With a straightforward personality, which can sometimes be described as “naive,” Xu has been devoted to his training and hasn’t given much thought to his own career plans, including his next opponents.

“Come whoever,” Xu said without thinking when he was asked who he wanted to take on next. “I don’t care who I take on next.

“My company will tell me who, when and where to fight next, and that’s enough. I don’t really feel much pressure from the outside and other people’s comments. I just know who I am and what I should do.”

“My company will make the arrangements, but it’s true that Cruz has been my target opponent and I look forward to the opportunity to challenge him,” said Xu. 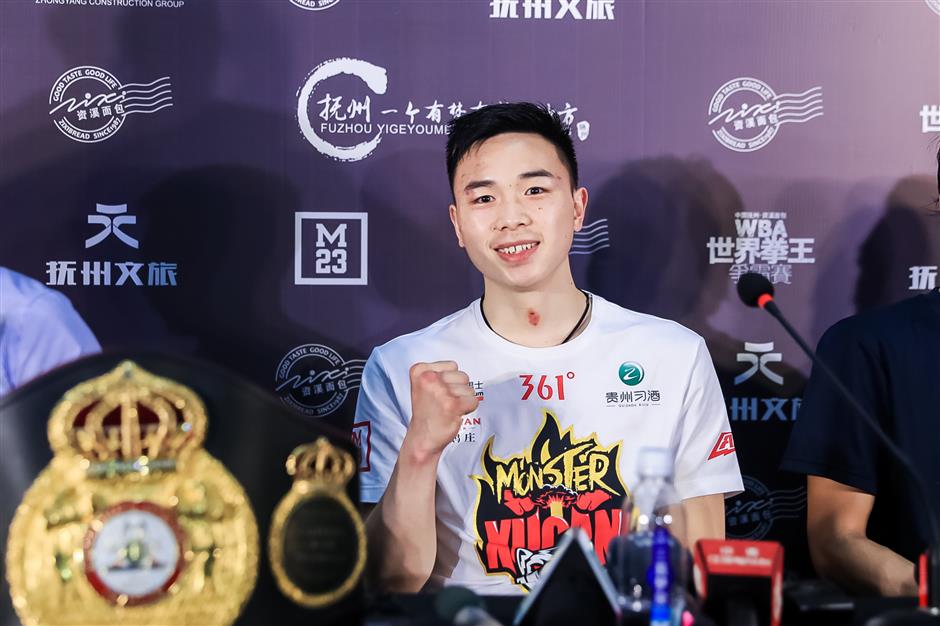 Xu poses with his gold belt after the fight.