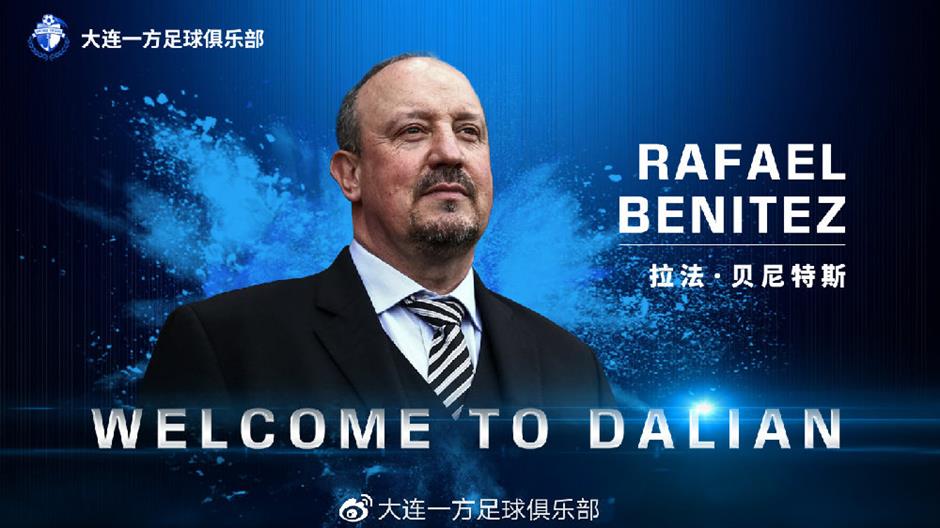 The 59-year-old Benitez, who famously guided Liverpool to the UEFA Champions League crown in 2005 and has managed at European giants like Inter Milan, Chelsea, Valencia and Real Madrid, parted ways with Newcastle United last week..

“We are very honored to have Mr Rafael Benitez with us at this moment,” Dalian wrote in its club statement which was released on Tuesday afternoon. “We believe that through his hard work, glory can be rebuilt and our fans’ expectations will be met.”

Benitez took charge of Newcastle in 2017 with the English Premier League mired in the drop zone. He was not able to save the Magpies from relegation, but earned them a promotion back to the EPL the following year by winning the Championship.

"After a long path... We start a new challenge! I´m happy to begin this new project with Dalian Yifang," he said on his Twitter account.

As a coach, Benitez helped Valencia win two La Liga titles and one UEFA Cup title. Apart from the UCL, his Liverpool side also captured an FA Cup crown and one UEFA Super Cup title. He also helped Chelsea win an Europa League title, as well as a FIFA Club World Cup trophy for Inter.

“Benitez was given the nickname of ‘strategy master’,” Dalian said in its statement. “The individual honors he achieved include two-time UEFA Manager of the Year and La Liga Best Coach, along with multiple Premier League Manager of the Month.”

Dalian fought hard until the last round of the 2018 CSL to maintain its top-tier status. The club replaced German Bernd Schuster with South Korean manager Choi Kang-hee as the new head coach before the start of the 2019 season.

Choi turned out to be a temporary choice, especially after the return of the club’s former major investor Wanda Group, as Dalian resolved to return to its glory days by becoming a major force in China's top-tier league.

Dalian used to be a powerhouse of Chinese football in the Jia A era. The club made headlines ahead of last season by signing Yannick Carrasco and Nicolas Gaitan from Atletico Madrid. Gaitan was replaced by Ghana striker Emmanuel Boateng this year and there have been reports of disputes between Carrasco and the coaching staff.

Despite an impressive resume, Benitez might need some time to get familiar with the CSL. Dalian did not unveil his annual salary, which was reported by some British media to be 12 million pounds (US$15.15 million) — the highest in the CSL and twice as much as his income at Newcastle.

The Spaniard takes over a squad that also features Marek Hamsik, who played under Benitez during his time at Italian side Napoli.

Benitez's first game in charge of Dalian will be on Sunday, when the club takes on Henan Jianye in the CSL.

Last month, Newcastle said Benitez would leave when his contract expired on June 30. He was expected to depart after failing to agree a contract extension with owner Mike Ashley over the last few months.

The 59-year-old has said his decision to walk away came after he lost trust in the club's hierarchy.