Tomic fined for not meeting 'professional standards' in Wimbledon loss 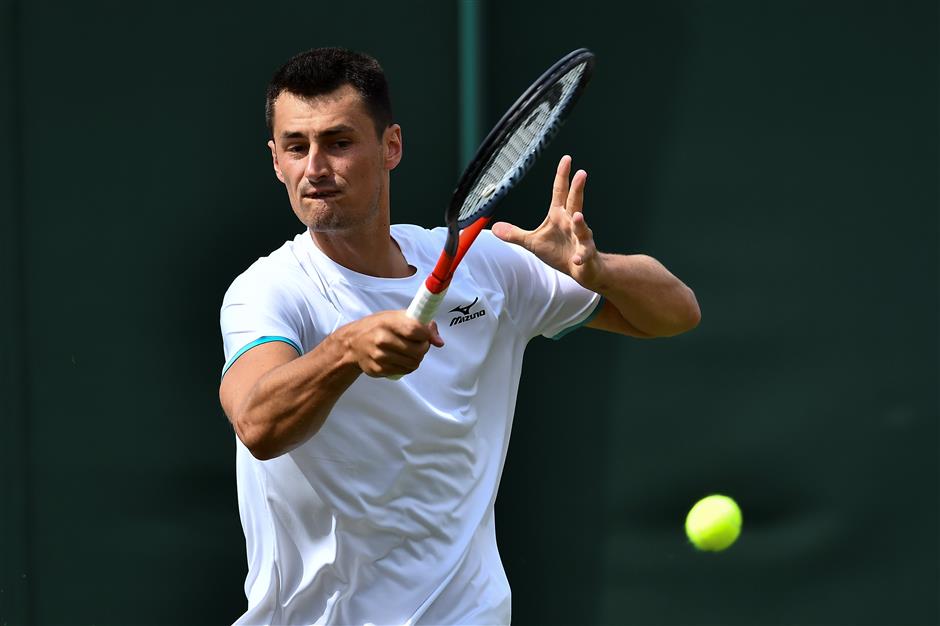 Australia's Bernard Tomic returns to France's Jo-Wilfried Tsonga during their men's singles first-round match of the 2019 Wimbledon Championships at the All England Club in Wimbledon, southwest London, on Tuesday.

Australian tennis player Bernard Tomic was fined his full prize money of 45,000 pounds (US$56,500) at Wimbledon on Thursday for not meeting "the required professional standards" in his first-round loss.

"It is the opinion of the Referee that the performance of Bernard Tomic in his first-round match against Jo-Wilfried Tsonga did not meet the required professional standards," the All England Club said in a statement.

Tomic can appeal the decision.

After the loss, Tomic was asked if he was happy with the effort he put in.

"Next question, please," was his answer.

He was later asked about being fined US$15,000 at the All England Club in 2017 for saying during a news conference that he was "a little bit bored out there" after losing a match.

Fines for a lack of effort are on the rise in tennis following the introduction of a performance rule in 2018 that aims to deter players, who enter tournaments while injured, from retiring during first-round matches.

American player Anna Tatishvili was fined US$50,000 at this year's French Open after a 0-6, 1-6 loss to Maria Sakkari of Greece. Tatishvili, who has appealed, had been playing in her first competition since October 2017 because of an ankle injury.

Germany's Mischa Zverev was fined US$45,000 at the 2018 Australian Open. He retired from his match against Chung Hyeon of South Korea in the second set, citing a viral illness.

Sloane Stephens, who won the 2017 US Open title and reached the Wimbledon quarterfinals in 2013, said she wasn't convinced it was fair for event organizers to decide if a player tried or not.

"I think now if the tournaments are going to be their own judge and say, like, and they're going to do that, then — hmm," said the ninth-seeded American, who reached the third round on Thursday. "I can't say I'm 100 percent onboard with that."

Injured players who withdraw before the tournament — allowing someone who lost in qualifying to get into the draw — receive half the amount of first-round prize money.

Tomic was asked if he had any issues with his preparation for the match at Wimbledon.