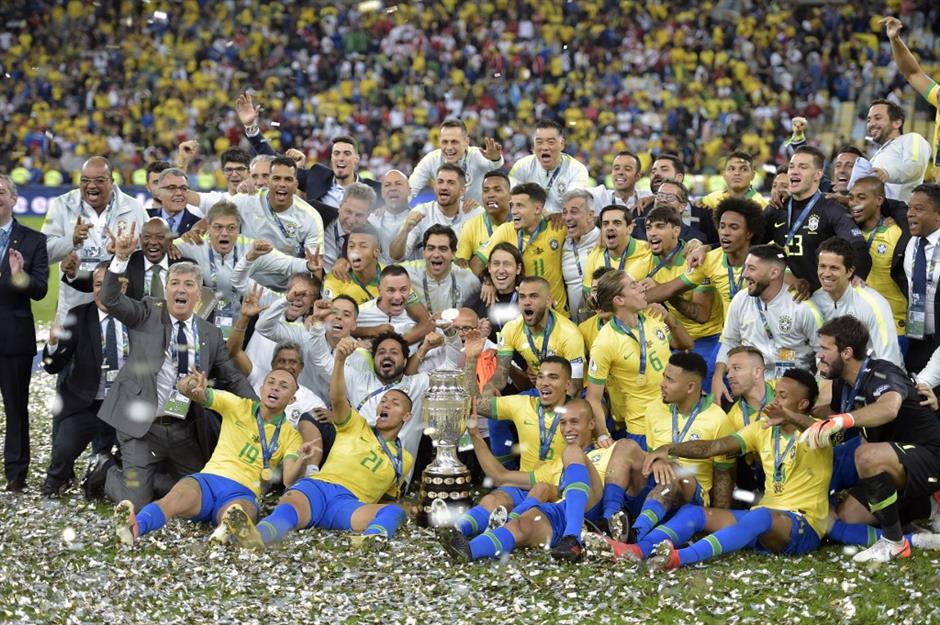 Members of the Brazilian national team celebrates with the trophy after winning the Copa America after defeating Peru in the final match of the football tournament at Maracana Stadium in Rio de Janeiro, Brazil, on July 7, 2019.

Gremio forward Everton opened the scoring at the Maracana on 15 minutes by rifling in a first-time effort. Peru captain Paolo Guerrero netted from the penalty spot in the 44th minute. Jesus restored Brazil's lead by slotting in a cool finish after a counter-attack on the stroke of halftime.

Brazil were reduced to 10 men in the 70th minute when Jesus was shown a second yellow card for catching Carlos Zambrano with an elbow as both were jostling for the ball.

But the-five time world champions were unshaken and sealed the victory in the 90th minute when Richarlison held his nerve from the spot after Everton was brought down by Zambrano.

It is the ninth time that Brazil have lifted the football's oldest international continental trophy, which was first played in 1916. Their last triumph came in 2007 when they beat Argentina 3-0 in Venezuela.

Both sides entered today's final without changes to their starting lineups.

Zambrano, Andre Carrillo and Edison Flores, who did not begin in Peru's 5-0 loss to Brail in the group stage, started their third match in succession for Ricardo Gareca's outfit.

For Brazil, Alex Sandro retained his place ahead of the fit-again Filipe Luis after the Juventus left-back's impressive display in the 2-0 semifinal defeat of Argentina.

Peru looked the most dangerous side early, attacking the ball with more urgency and threatening to suffocate Brazil with their high defensive line.

The hosts netted against the run of play in the 15th minute when a Jesus cross from the right found Everton, who left goalkeeper Pedro Gallese with no chance with his fizzing shot from 12 yards. The 23-year-old's strike made him the tournament's leading scorer with three goals

The goal changed the tone of the match as Brazil began to dominate possession and foray forward with more authority. They should have doubled their lead in the 37th minute when Roberto Firmino latched onto an Alex Sandro cross only to head his effort over the bar.

However Peru regathered their composure and were awarded a penalty in the 41st minute. Referee Roberto Tobar consulted the video assistant referee before ruling that Thiago Silva handled the ball following a Christian Cueva cross. Guerrero sent Alisson the wrong way as he also took his personal scoring tally this tournament to three goals.

The Selecao wrested back the lead when Arthur dispossessed Yoshimar Yotun and rolled a deft pass to Jesus, who made no mistake with an angled finish just before halftime.

Brazil continued to dictate terms after halftime. Philippe Coutinho twice had chances to extend their lead but sent a 20-yard effort whistling over the bar and then had a shot blocked when he had the option of passing to an unmarked Jesus. Firmino then guided a header wide after another probing Sandro cross.

Brazil were dealt a major blow with 20 minutes remaining when Jesus was given his marching orders. The Manchester City forward's departure immediately sparked Peru into life and Miguel Trauco forced Alisson to make reflex save with an attempt from 20 yards.

Brazil coach Tite made two changes in quick succession with forward Richarlison coming on for Firmino and center-back Militao replacing Coutinho to reinforce his side's defence.

The move proved effective and Everton capped off a fine tournament with a mazy run into the box that drew the penalty. 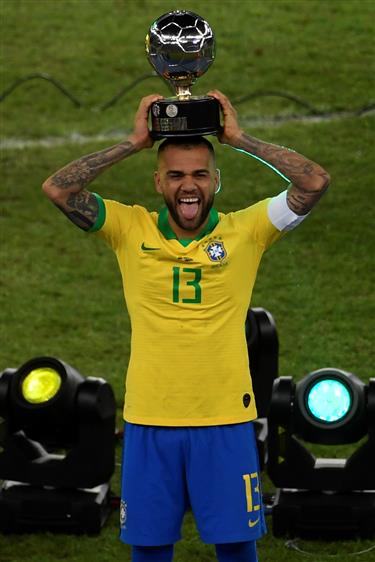 The 36-year-old right-back started in each of Brazil's six matches and scored in the hosts' 5-0 victory over Peru in their final group match on June 22.

Alves is currently without a club, having announced his departure from French champions Paris Saint-Germain last month.

He replaced his former PSG teammate Neymar as Brazil's captain in May after the forward's series of off-field controversies, including a physical attack on a fan that earned him a three-match ban by the French Football Association.