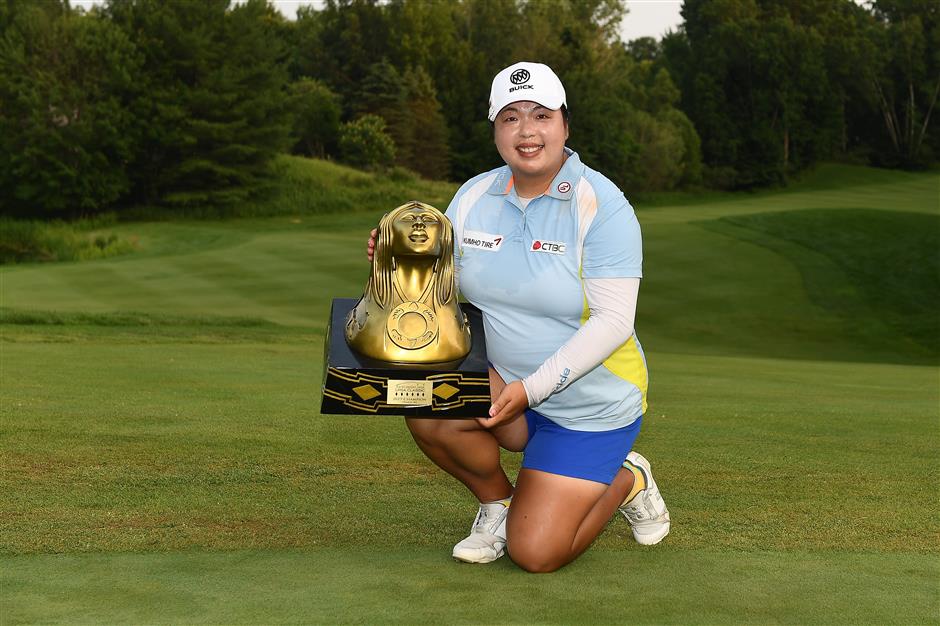 Feng Shanshan set a high target for such low scoring at the Thornberry Creek LPGA Classic, and she figured she had done enough.

Three birdies in a four-hole stretch had taken her from three shots behind to one shot ahead on Sunday, or so she thought. It was only after she hit 7-iron to 3 feet on the final hole that she saw the leaderboard and realized she was tied with Ariya Jutanugarn.

No problem. Leaving the flagstick in, she rolled in her final birdie putt for a 9-under-par 63 and a one-shot victory over Ariya, who had hit 8-iron to 3 feet for birdie and a 64. Feng won for the 10th time on the LPGA Tour, but her first victory since Blue Bay in China in November 2017.

The shootout on the soft Thornberry Creek at Oneida course in Oneida, Wisconsin, materialized the way everyone expected.

Patty Tavatanakit shot 61 and was part of a five-way tie for the lead before the final two groups even teed off. She wound up in a tie for 15th. Seven players had at least a share of the lead at some point in the final round.

Ariya, a former world No. 1 still searching for her first victory this year, appeared to be in control with a three-shot lead on the back nine. She holed a bunker shot for an eagle on the reachable par-4 sixth. She closed out her 30 on the front nine with another eagle.

But the Thai pulled her tee shot on the par-5 15th, turning a birdie hole into a bogey that cost her momentum and the lead. In the group behind her, Feng ran off birdies at the 13th, 14th and 16th holes, the last one a dart into 2 feet that gave her a one-shot lead.

Ariya wasn't finished, however, with her final full shot covering the flag and setting up birdie. Feng had the last word.

"Before the round today, I didn't know what the others were going to do, so I was aiming for 30 under," the Chinese star said.

She finished at 29-under 259, two shots shy of the tournament record that South Korean Kim Sei-young set last year. Twenty-two players finished at 20 under or better.

It was the second close call in three weeks for Ariya, who played in the final group at the KPMG Women's PGA Championship at Hazeltine and failed to make a birdie as Australia's Hannah Green won.

"Overall, my whole week was really good," the Thai said. "It's like amazing, because I didn't expect to play that good at all, so I'm really happy about how I played."

American Tiffany Joh birdied her last three holes for a 67 and tied for third with Amy Yang (65) of South Korea for her best finish on the LPGA Tour.

Another Korean, Kim Hyo-joo, nine shots behind after opening with a 71, closed with a 64 and finished fifth.

Park Sung-hyun, who returned to No. 1 in the world with a victory last week in Arkansas, never got anything going in the final round. The Korean made only one birdie on the par 5s, didn't make a birdie after the 12th hole and closed with a 69 to tie for sixth with Yealimi Noh, who had a 68.

Noh, the 17-year-old from California who turned down a chance to play at UCLA to turn pro, wrapped up a big week. She began in a Monday qualifier just to get into the tournament, played in the last group on the weekend and already has a spot in the field next week at the Marathon Classic.

Feng rose to No. 1 in the world toward the end of 2017, but began to chase distance and lost control of her irons, which she considered her strength.

"I tried to get more distance and then maybe just messed up the feeling about controlling the ball," Feng said. "I got that back, so I'm really happy about that. I think this is not the last one, for sure, so as many as I can win."