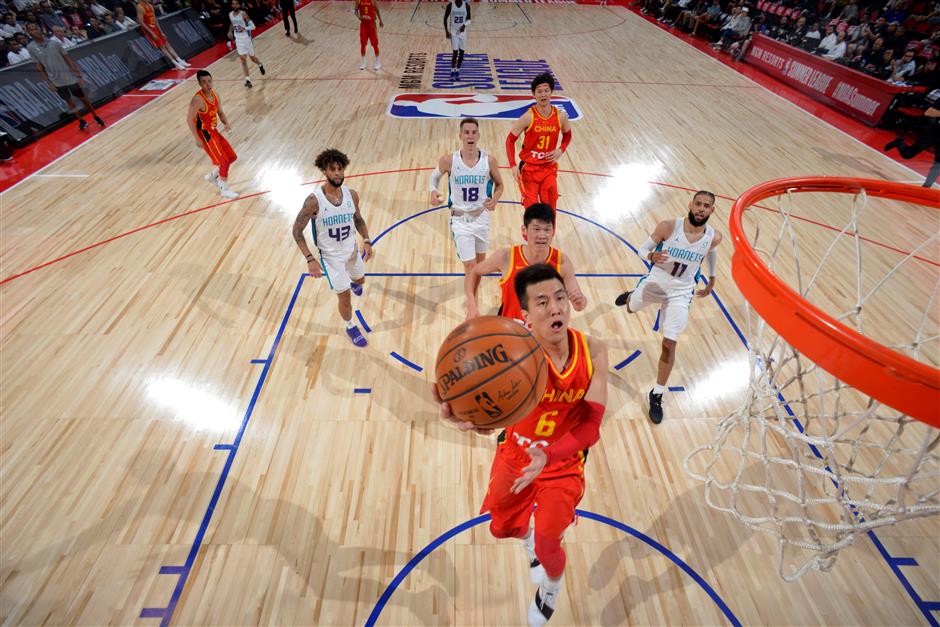 Point guard Guo Ailun of China shoots the ball against the Charlotte Hornets during their NBA Summer League game at the Cox Pavilion in Las Vegas, Nevada, on Monday. China won 84-80.

They're learning plenty — and got a win as well.

The Summer League is essentially several preseason games for the Chinese. They're in Las Vegas, Nevada, to get ready for the FIBA World Cup, which will take place in China from August 31 through September 15 — with USA Basketball entering as the top-ranked team in the world and the presumed favorite to win the tournament for the third straight time.

Fans in basketball-mad China are already eager for the World Cup. The national team is getting there, and an 84-80 win over the Charlotte Hornets on Monday was a sure sign of progress.

Among the challenges for the Chinese so far in Las Vegas: Getting used to the speed and strength of the teams in the Summer League, and Li said he's urged his players to start becoming tougher mentally.

"It's so fast. It's a different level," Li said. "The contact, we've never seen this before. The rules are different. It's hard to play this tournament."

The Chinese (1-2) lost their first two games in Las Vegas — they fell by 41 points to the Miami Heat last Friday, and looked much better in a 17-point loss to the Sacramento Kings on Saturday. They trailed by six in the opening minutes against Charlotte on Monday, then took the lead late in the first quarter and held it the rest of the way.

"We're still improving a lot," Li said. "We improved a lot when we came here. The first game we weren't ready for the physical game, the fast game. The second game, on a back to back, we started realizing some things."

The players China brought to Las Vegas represent the bulk of what will be the nation's World Cup roster. Longtime NBA player Yi Jianlian is expected to play in the World Cup, and he's not playing in Las Vegas because of an injury. Guo Ailun, one of the more talented Chinese players, didn't play against Miami, scored 20 points against Sacramento and had 12 more in the win over the Hornets.

"The intensity of the game is really high in the Summer League," point guard Guo said through a translator before Monday's game. "It's much stronger than what is in China. ... The intensity, the pace, it's really a challenge."

For group play in the World Cup, China will take on Poland, Venezuela and the Ivory Coast. Based on FIBA rankings, it's not a particularly strong group and it's not unreasonable to think that China would make at least the tournament's second round.

Li believes the level of play at the Summer League may even exceed what the Chinese see in group play.

"It's a lot of help," Li said. "Those teams, I think they're better than the other teams in the group. We're trying to play to win these games and we'll use those games to have confidence to face the other opponents."