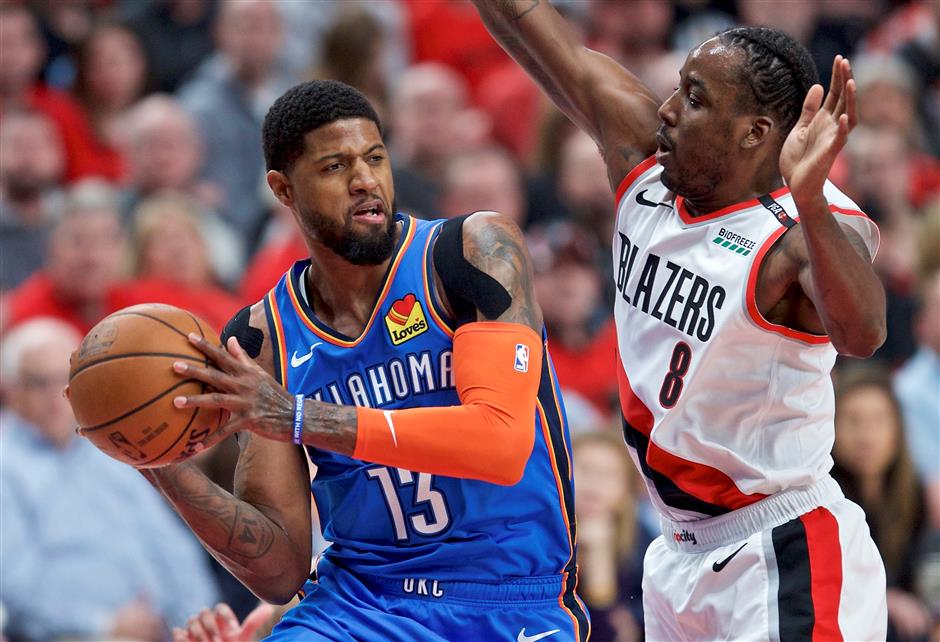 Oklahoma City Thunder forward Paul George (left) looks to pass the ball around Portland Trail Blazers forward Al-Farouq Aminu during the first half of Game 2 of their NBA first-round playoff series in Portland, Oregon, in this April 16, 2019, photo.

Kawhi Leonard and Paul George made their move to the Los Angeles Clippers official on Wednesday, with the National Basketball Association team announcing Leonard's signing and George's trade deal with Oklahoma City.

Details of Leonard's contract were not revealed by the Clippers, but ESPN and The Athletic website said Leonard's deal was for three years and not four as originally thought when the decisions were unveiled last week.

The reported three-year deal is worth US$103.1 million, rather than a four-year contract for US$142 million, and times with George's 2018 deal for four years at US$136.9 million to give each player an opt-out clause ahead of the 2021-22 season, according to unnamed sources in the reports.

If true, the Clippers could offer Leonard four years at US$196 million in 2021 and pitch George a five-year deal worth US$254 million at the same time.

"This is a historic moment for our organization and our fans," Clippers president of basketball operations Lawrence Frank said.

Leonard, who is from Los Angeles, departed the Toronto Raptors after leading them to the NBA title in his one season with the Canadian club after a trade from San Antonio.

"We are grateful and honored that Kawhi Leonard has decided to come home and join the LA Clippers. Kawhi is a peerless two-way player, a relentless worker and a natural fit for the serious, professional culture our group has established," Frank said.

"Having him on our side is a tremendous privilege and a massive responsibility, one we will take very seriously. His expectation, and ours, is to contend for championships."

Leonard reportedly would not agree to the deal unless the Clippers obtained George and they did by dealing Canadian guard Shai Gilgeous-Alexander, Italian forward Danilo Gallinari and five future first-round NBA draft picks to the Thunder for George.

"Paul George is one of the greatest two-way players in our game," Frank said. "He's both an elite scorer and a relentless defender whose versatility elevates any team.

"When you have the opportunity to acquire a contributor of his caliber, you do what it takes to bring him home. Paul is a native of the Los Angeles area and an ideal fit for the Clippers, thanks to his selflessness and drive.

"We've plotted an aggressive course to build a championship contender and acquiring Paul is a critical step."

Leonard, 28, won the NBA Finals Most Valuable Player award in 2014 with the Spurs and last month with the Raptors. He was also the 2015 and 2016 NBA Defensive Player of the Year.

George, 29, averaged career highs of 28.0 points, 8.2 rebounds, 4.1 assists and 2.2 steals with the Thunder last season. He was among the NBA's top defensive talents with four deflections and 2.7 loose-ball recoveries a game.

The moves give the 76ers a powerhouse frontline, adding former Boston star Horford as the player who gave returning Philadelphia star center Joel Embiid the most trouble of any rival next season.

Together with Australian guard Ben Simmons directing the attack, the 76ers figure to challenge the Milwaukee Bucks for supremacy in the Eastern Conference next season.

"We're excited to welcome one of the NBA's best frontcourt players in Al Horford to Philadelphia," 76ers general manager Elton Brand said. "He has built his reputation around hard work and a tradition of winning, which are the same qualities that have formed the foundation of the 76ers.

"Al's playmaking, elite defensive talents and veteran leadership confirm why he is a crucial addition to our roster."

Horford averaged 13.6 points, 6.7 rebounds, 4.2 assists and 1.3 blocked shots a game for Boston last season. He hit 53.5 percent from the floor, his seventh season making most of his shots, a run exceeded among active players only by LeBron James, Dwight Howard and Pau Gasol.

Harris, obtained in a February trade from the Clippers, had career-high averages last season with 20.0 points, 7.9 rebounds and 2.8 assists a game.

"Signing Tobias and solidifying him as a foundational piece of our core for years to come was a top priority for our organization this summer," Brand said.

"Tobias is a fierce competitor with a tireless work ethic and embodies all of the qualities of a franchise cornerstone."