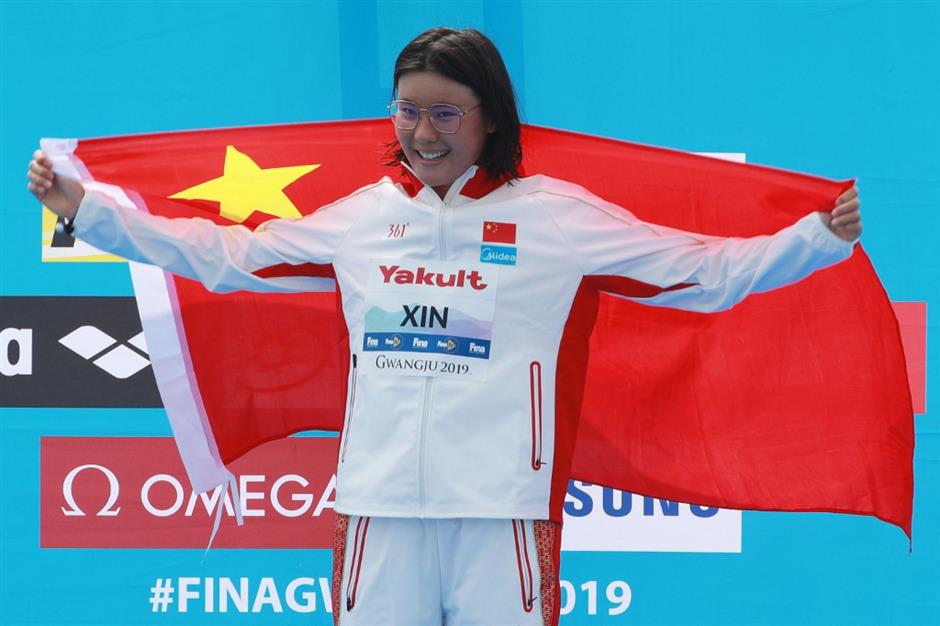 This handout photo taken and released by the FINA Organising Committee via Yonhap shows gold medallist China's Xin Xin celebrating during the medals ceremony of the women's 10km open water swimming event during the 2019 World Championships in Yeosu on July 14, 2019.

The 22-year-old finished first in one hour 54 minutes and 47.20 seconds in the women's 10km open water swimming, becoming the first swimmer to grab a gold medal for China in the history of the swimming world championships.

Xin was just 0.90 second ahead of Haley Anderson of the United States who came in second on the third day of the worlds. Rachele Bruni of Italy came away with bronze in 1:54:49.90.

The Chinese swimmer went down in history of open water swimming, after breaking the Asian record in the women's 800m freestyle at the 2013 National Games in Liaoning, China.

Among 64 contestants, Xin was the first to qualify for the open-water 10km marathon at the 2020 Summer Olympic Games in Japan. The 10km marathon swimming debuted at the Beijing Olympics in 2008.

"My strategy today was to relax and save energy in the first half, and to keep clear in the mind and also to keep the confidence in myself," said Xin.

"My goal before this competition was to qualify for the Olympics. I believe that I can race better and better in the future," said the Chinese swimmer.

Defending champion Aurelie Muller of France, who won the titles in 2015 and 2017, ended up in 11th place, missing the Olympic qualification. Her teammate Lara Grangeon, who led the race at several points, came fourth in 1:54:50.00, just 0.1 second behind the bronze medalist.

The open water event was held at Yeosu EXPO Ocean Park in Yeosu, a city some 100 km to the south of the main host city Gwangju.