The Philadelphia 76ers and star guard Ben Simmons have agreed to a US$170-million, five-year contract extension, a person familiar with the situation said. The max deal is the latest big commitment by a team expected to make a serious push at its first National Basketball Association championship since 1983.

Simmons, 22, will make about US$8.1 million this season, the last of his four-year rookie deal. His salary for the next season will jump to about US$29.3 million and rise to nearly US$39 million in 2024-25, according to the person who spoke on condition of anonymity on Monday because the contract is not official.

The deal solidifies the 76ers' core for the next few seasons. All-Star Joel Embiid and Al Horford are under contract though 2023, Tobias Harris through 2024 and now Simmons through 2025. Horford got a US$109-million, four-year deal and Embiid agreed last season to a US$147-million, five-year deal.

Sixers general manager Elton Brand had until the middle of October to reach a max deal with Simmons but wasted little time in locking up another cornerstone player.

"I think I want to work on everything and continue to let my game grow," Simmons said at the end of the season. "I think the one thing I got a lot better at this season was leadership."

The Sixers were knocked out of the Eastern Conference semifinals for the second straight season.

Philadelphia is 101-58 in regular-season games when Simmons plays. He has had 22 triple-doubles in the last two seasons, tied for third most in the league with Denver's Nikola Jokic and trailing Oklahoma City's Russell Westbrook (59) and the Los Angeles Lakers' LeBron James (26).

Simmons also has had 80 double-doubles over the last two seasons.

But he missed all 11 3-point attempts in his rookie season and was 0 for 6 last season, a combination of an awkward shooting form and a hesitancy to keep shooting shots he can't make. Defenses sagged on Simmons daring him to shoot because the speedy All-Star can't do much outside the paint.

Harris, who re-signed with the Sixers this summer on a US$180-million, five-year contract, recently worked out with Simmons in Los Angeles and found him dedicated to improving his shot.

"Everybody was trying to figure out why I was guarding him at the 3-point line, but it was really because he hit two of them," Harris said. "When I dared him to shoot two of them, he hit two in a row. That's why I was there. He's made big improvements on his game. His jump shot is looking really good and he has the confidence to shoot." 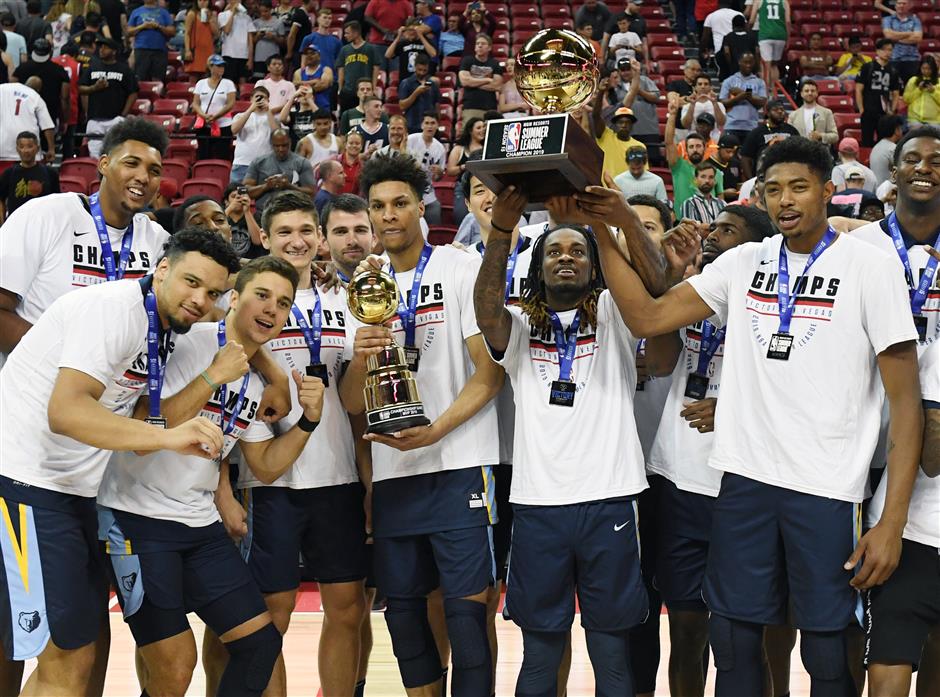 Members of the Memphis Grizzlies celebrate their 95-92 victory over the Minnesota Timberwolves to win the championship game of the 2019 NBA Summer League at the Thomas & Mack Center in Las Vegas, Nevada, on Monday.