Rivals have shunned Sun at the world championships in Gwangju, with Briton Duncan Scott snubbing him at the 200 meters freestyle medal ceremony days after Australian Mack Horton refused to share a podium with him after the 400.

Triple Olympic champion Sun was cleared of a doping offense in January but the World Anti-Doping Agency is appealing the case at the Court of Arbitration for Sport.

Australian Cotterell, who has worked on and off with Sun for 11 years, said the implication that he would coach a drug cheat was an "insult".

"If you think for a second I would be doing that with someone that is a cheat, then people don’t know me," Cotterell told The Australian newspaper on Thursday.

"What is the definition of a drug cheat? Someone who has failed a test? By that definition, they have got drug cheats on the Australian team.

"I have been on teams where people have failed a drug test, accidentally and through no fault of their own. I would never call them cheats. It seems to be very hypocritical."

Sun was banned for three months in 2014 after failing a drug test, with the case kept under wraps by world swimming governing body FINA and the Chinese Swimming Association until well after the ban's expiry.

Sun said he was taking medication for a heart condition and had not deliberately doped. WADA reviewed the case and decided not to appeal the sanction.

The latest case involves an aborted out-of-competition test last year in which Sun was alleged to have refused to cooperate with testers and ended up having a blood sample destroyed with a hammer.

A report of the FINA Doping Panel hearing leaked to an Australian newspaper backed Sun's claim that the testers did not have proper accreditation and he was within his rights to refuse the test.

"After hundreds and hundreds of tests you know the protocol," he said.

"They didn’t follow it and all those facts are there. If things aren’t right are you just going to give up your blood to strangers who don’t have credentials?" 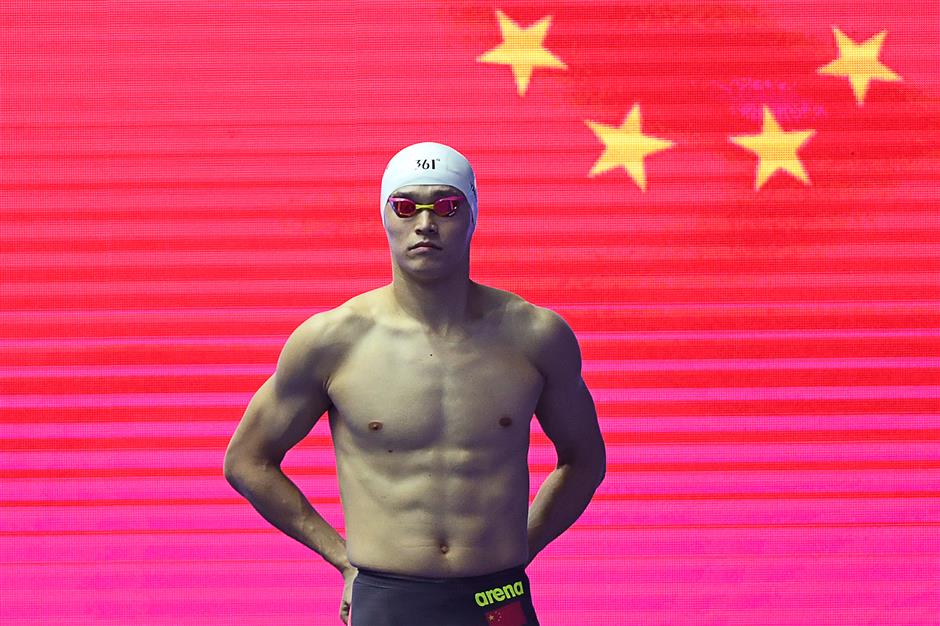 Sun was free to swim in Gwangju pending the CAS hearing of the WADA appeal in September and he won a fourth straight 400 gold and retained his 200 title.

Scott's refusal to shake hands with Sun at the 200 medals ceremony and join him for photos drew an angry response from the 11-time world champion, who confronted the Briton as they exited.

With Horton having repeatedly made clear his position that Sun is a "drug cheat" since the Rio Olympics, Cotterell said it was natural for Sun's frustrations to spill over.

"It is starting to get to Sun Yang. He is an emotional guy," Cotterell added.

"How many times can you get insulted? It would be better if he could ignore the whole kerfuffle, but it builds and he is human."

China's head swim coach Zhou Jihong has also hit back at the protests against Sun, calling them "harmful" and "prejudiced".

"It is unbelievable and unacceptable that some people publicly defiled the innocence of an elite athlete based on speculation and hearsay," Zhou told Chinese media on Wednesday.

"It shows prejudice and irrationality. It is of great harm to the sport and the athlete."

However, many swimmers — including Olympic champions Adam Peaty of Britain and American Lilly King — have backed the stand taken by Horton and Scott against Sun.

The feuding trio subsequently received a formal warning from swimming's governing body FINA, which is looking to introduce a tough new code of conduct to prevent a repeat of this week's protests at future competitions.

Zhou continued to protest Sun's innocence, insisting: "No one has the right to judge someone by rumours."