Jamie Chadwick wants to be the first woman in more than four decades to race the men in Formula One but she knows it will take much more than becoming the first champion of the all-female W Series for that dream to come true.

The US$500,000 prize that the 21-year-old Briton pocketed for title success at Brands Hatch on Sunday will help only so far.

"I am under no illusions as to how tough it’s going to get," she said after clinching the crown with fourth place in the season's final race.

Financial backing will be the biggest hurdle, despite having a factory contract with Aston Martin in sportscars, just as it is for anyone setting out to climb through the junior series.

"If you look at all the drivers who've made it into F1, they've all come with significant backing. Whether that's personal or through sponsors or a team, none of them have paid their way scraping the barrel," she said.

"So it's tough, it's the way the sport is, but hopefully this has put me in the best position to make that happen."

The W Series, with identical Formula Three cars, aims to better equip female racers to take on the men further up the motorsport ladder.

The last woman to race in Formula One was the late Italian Lella Lombardi in 1976.

The six-race women's championship, criticized by some early on for separating the sexes, has garnered plenty of largely sympathetic media coverage and been broadcast free to air in Britain, where F1 is live only on pay TV.

"This year has provided a platform I would never otherwise have had," said Chadwick, who last year became the first woman to win a round of the regular British Formula Three championship.

"I was relatively unknown coming into the season and now I think the leg-up it has given me has been huge." 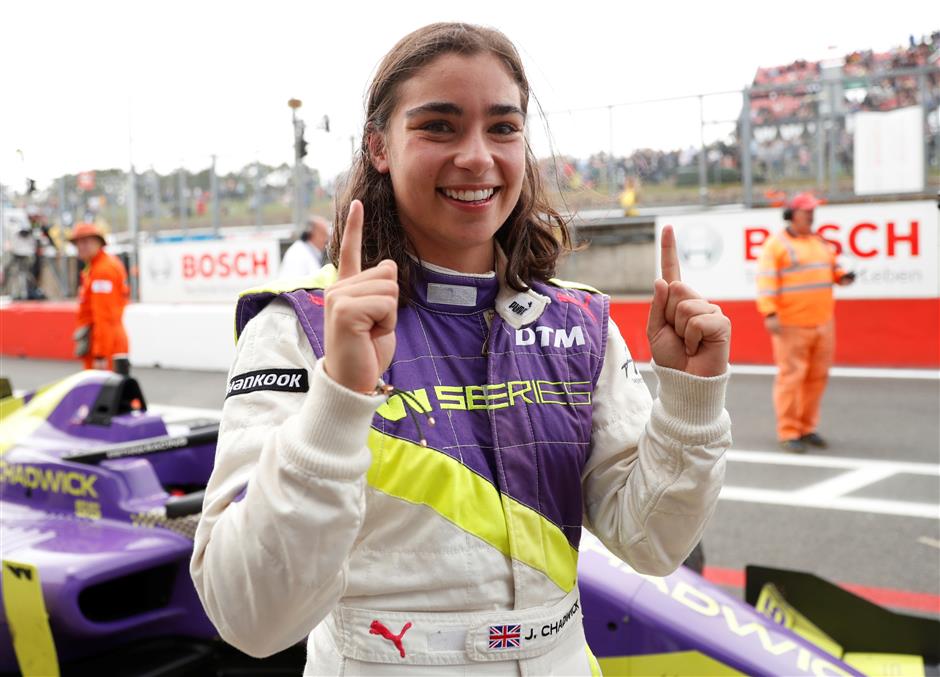 Organizers expect her to return next year, when points become available towards an F1 super license, but Chadwick will also be looking for more action elsewhere.

"I want to do as much as I can... my overall aspirations are much greater than just this, than the W Series," she said.

"I want to go on and achieve a lot in the sport. Next year will be preparing myself in the best way to do that.

"This year's been great, but really I need more racing under my belt to level up with the top guys that are out there, and hopefully next year can allow me to do that," added the Williams Formula One development driver.

W Series founder Catherine Bond Muir hoped to add at least two races to the calendar next year, probably in Europe before a possible inter-continental expansion into the United States and Asia in 2021.

The series is hosted as a support event to the German Touring Car (DTM) championship and that will remain the same.

"Everyone describes it as the second album," Bond Muir said when asked about the challenge ahead.

"We've spent so much of this year talking to the media about what is W Series, why it's needed and responding to our critics and giving our point of view against their criticism.

"I think we've done that now and next year has got to be all about the drivers and telling the drivers' stories and introducing the personalities and characters."

With the top 12 in this year's standings qualified automatically to return, testing will start in Spain next month to find fresh talent and complete the 2020 grid.