Kyle Lowry of the NBA champions Toronto Raptors has withdrawn from the pool of candidates USA Basketball is considering to take to the FIBA World Cup later this month.

Lowry said his surgically repaired thumb isn't ready to allow him to participate in on-court workouts. He had surgery last month to repair a torn tendon that dogged him during the National Basketball Association playoffs, and was hopeful of being on the floor as early as Tuesday when the Americans resumed practice in El Segundo, California.

But after meeting with his surgeon on Monday, Lowry apparently realized he wasn't going to be able to play.

"I was hoping to be available in time to help my country in their quest for gold in this upcoming tournament," Lowry wrote on Instagram. "I love playing for USAB but I have to sit this one out and support the team from home."

Lowry's decision means 15 players are still in the running for 12 spots — and one of those 15, Boston guard Marcus Smart, missed much of last week's camp in Las Vegas, Nevada, with a calf injury. It is possible that USA Basketball could add to the player pool before making any final decisions on the World Cup roster, though the Americans were also prepared if Lowry was not cleared to play.

"We have guys who can play different positions, guys with character, versatility and athleticism," USA Basketball managing director Jerry Colangelo said last week in Las Vegas, when the Americans started paring down the roster. "And we think it's a hungry group."

Lowry has about six weeks now to get ready for Raptors camp. He said he expects the Americans to win the World Cup for an unprecedented third consecutive time.

"At the end of the day I believe the men that are playing will be great and will win the gold for our country," Lowry wrote.

The US squad has an exhibition game scheduled against Spain on Friday in Anaheim.

The Americans will fly to Australia the following day, where they are scheduled to play two friendlies against the Australians and one against Canada before the World Cup starts on August 31.

The US will be without a host of top NBA talent in China.

LeBron James said in April that he would not be available and more recently NBA stars, including James Harden, Anthony Davis and Kawhi Leonard, have opted out of the US squad, preferring to prepare for the NBA season. 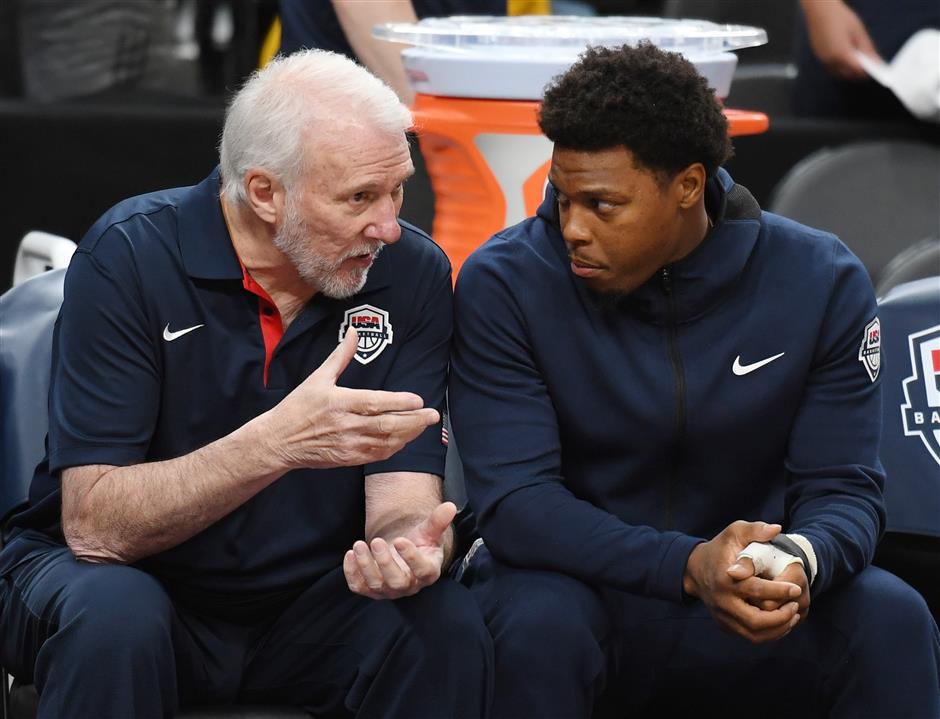 Hachimura became the first player from Japan to be chosen in the first round of the NBA draft, taken with the No. 9 overall pick by the rebuilding Washington Wizards in June.

The former Gonzaga University star played in the NBA's Summer League for the Wizards but now will take up national duties for Japan at the World Cup and for other warm-up games, including New Zealand again on Wednesday.

"We got off to a good start and went from there ... I want to lead this team," Hachimura said after Monday's game at Port Chiba Arena. "I'm just happy to be back in Japan after a while for these friendly games."

The 21-year-old from Toyama Prefecture scored 22 points in the first half and impressed Detroit Pistons head coach Dwane Casey.

"I think he's going to be a heck of a player, the NBA is a physical game, a tough game. He's got a great body for the NBA," Casey, who is in Japan for a coaching clinic and was at the game as a spectator, told Kyodo News.

"I see Rui ... developing his game to move out to the 3-point line. Because that's where the NBA is. Great kid, great work ethic."

Japan opens its World Cup competition against Turkey on September 1 in Shanghai and then takes on the Czech Republic and the US. The top two teams in the group advance to the second round.