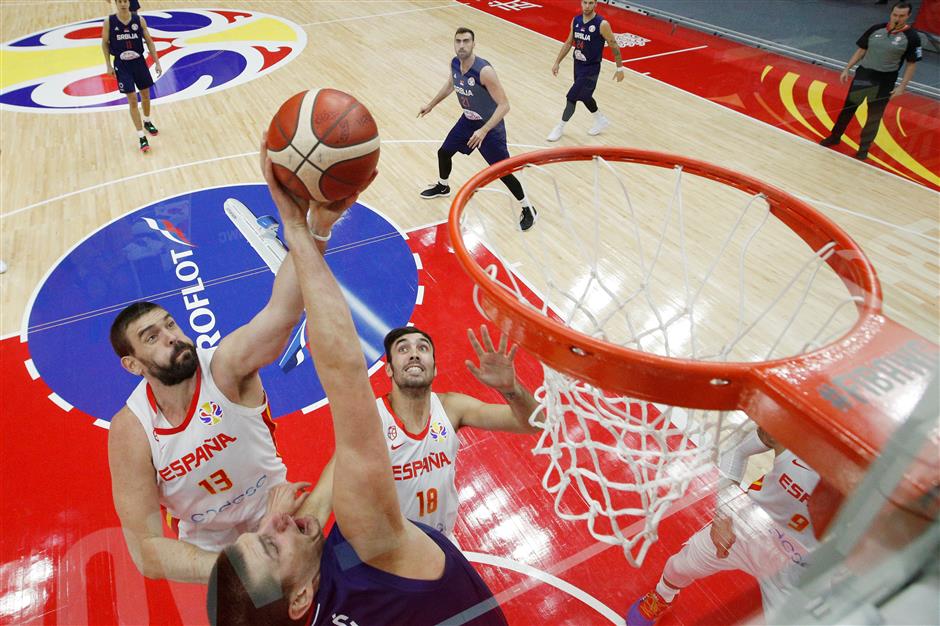 Marc Gasol (left) of Spain is fouled by Nikola Jokic of Serbia as he attempts a shot during their 2019 FIBA Basketball World Cup Group J second-round match in Wuhan, Hubei Province, on Sunday. Spain won 81-69.

Spain will take on Poland at Shanghai’s Oriental Sports Center in Pudong on Tuesday in one of the quarterfinals of the 2019 FIBA Basketball World Cup.

As one of the favorites for the championship, Spain is unbeaten at the World Cup in China — winning all three group-stage matches and beating Italy and Serbia in second-round matches.

Spain will be led by point guard Ricky Rubio, who plays for the Phoenix Suns in the National Basketball Association. Rubio has averaged a team-high 14.6 points and 4.8 assists in the past five matches.

Poland also managed three victories in the group stage. It overcame Russia but lost to Argentina in the second round. Thanks to the group-stage results, it secured a place in the last eight.

Naturalized shooting guard A J Slaughter has been a key player for Poland at the tournament. He has averaged 12 points and 3.4 assists in the previous five matches, and contributed 22 points in Poland's 79-76 victory over China.

Poland is making a return to the World Cup after 52 years, and is certainly not planning to give Spain an easy time in Shanghai. The two teams have never met in the World Cup, though Poland holds a 2-1 advantage in their three Olympic meetings.

The match kicks off at 9pm. Local transport authorities will extend the operation hours of metro trains until at least half an hour after the match. More taxis will also be dispatched to the venue site to meet demand.