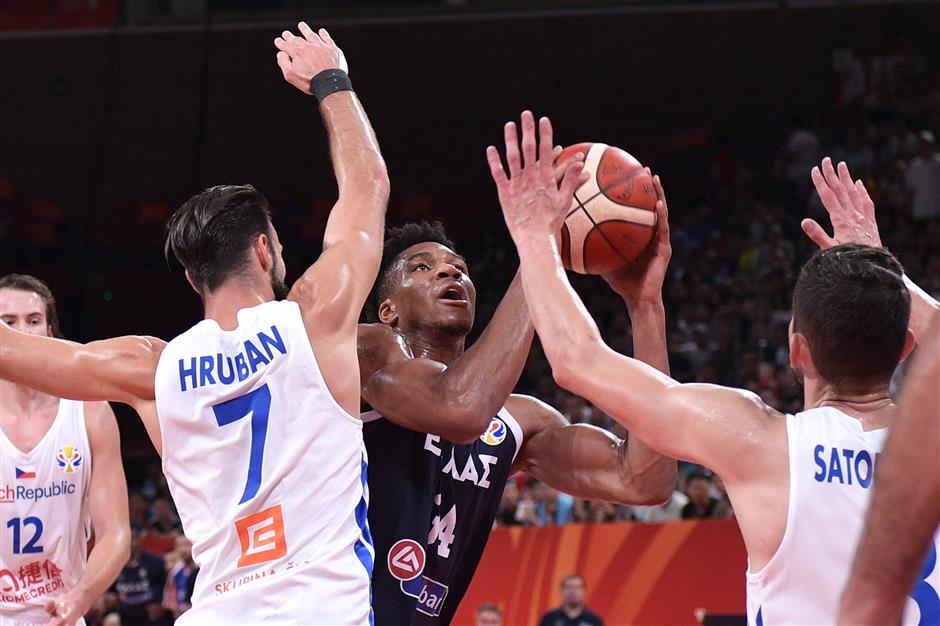 Greece's Giannis Antetokounmpo (center) handles the ball as Vojtech Hruban and Tomas Satoransky of the Czech Republic try to block during their 2019 FIBA Basketball World Cup Group K second-round match in Shenzhen on Monday. Greece went out despite winning 84-77.

Greece is calling for the officials who oversaw its final game at the 2019 FIBA Basketball World Cup to be banned after NBA MVP Giannis Antetokounmpo and his team exited the tournament amid rancor on Monday.

Greece's coach said that its star man had been the victim of a lack of "respect" from referees after being fouled out in an 84-77 victory over the Czech Republic.

The Milwaukee Bucks standout picked up a fifth foul midway through the fourth quarter and even though Greece won, it was not by the 12 or more points it needed.

A team spokesman confirmed that the Greeks were writing to governing body FIBA seeking a ban for the three referees in charge.

"Also (a ban) for those who nominate the referees and also watch the video and announce the results," the spokesman said in a text message.

Greece, chasing the big win it needed to reach the quarterfinals in China, wasup by 10 points with just over eight minutes left in Shenzhen, Guangdong Province.

It reached the magic 12-point lead, only for the Czechs to immediately hit back to narrow the deficit once more, then came the loss of the 24-year-old Antetokounmpo.

He was seen remonstrating with the officials after Greece's fate was sealed, but overall the reigning MVP was not on the top of his game at the World Cup.

Antetokounmpo had 12 points, 9 rebounds and 4 assists before his afternoon — and Greece's tournament — came to an early end.

"He came every day to fight on the court, of course he did not get the respect he wants and I mean about the two fouls he received today, the third and the fifth (both offensive fouls)," said Greece coach Thanasis Skourtopoulos.

"You cannot call these kinds of fouls on this kind of player.

"That's finished because I don't like to talk about the referees too much."

It is not the first controversy involving referees at this World Cup.

FIBA on Sunday removed from the competition match officials who made an error in the dying seconds of Lithuania's tournament-ending loss to France, but the result was allowed to stand.

The crucial mistake occurred with the French leading 76-75 at the time.

Reigning two-time champion the United States is building a head of steam and dismissed Brazil 89-73 to set up a quarterfinal with France on Wednesday.

Victory also sealed Team USA's spot at the Olympics in Tokyo, where, to, it is the holder.

Gregg Popovich's young team was already assured of a place in the last eight in China but it still made it five wins in a row to top Group K.

Wednesday's clash with France, beaten 98-100 by Australia, will be a tougher proposition.

But having struggled to defeat Turkey in overtime in the first round, this Team USA missing its megastars seems to be warming to the task of taking home three World Cup crowns in a row.

"We picked it up defensively in the second half and that's what changed it for us," said Popovich.

Myles Turner of the Indiana Pacers led the US with 16 points and 8 rebounds.

Brazil saw its coach Aco Petrovic ejected in the first half and it refused to attend the post-match press conference.

In a thrilling encounter between two already qualified teams, Australia made it five wins out of five by battling past France.

Australia will be the strong favorite when it plays the Czech Republic in the quarters, also on Wednesday.

Serbia takes on Argentina and Spain will start as the strong favorite against Poland in Tuesday's quarterfinal clashes. 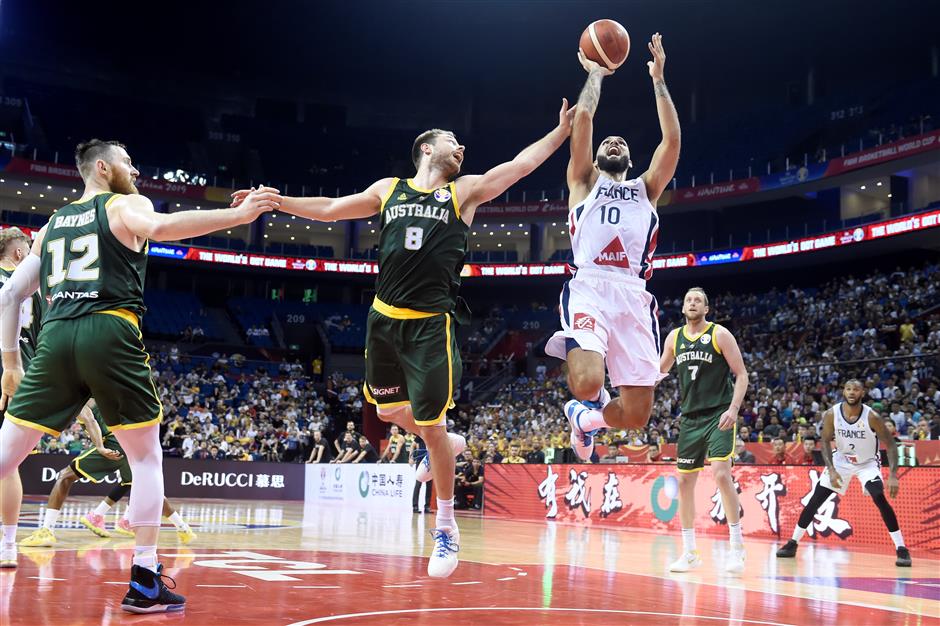