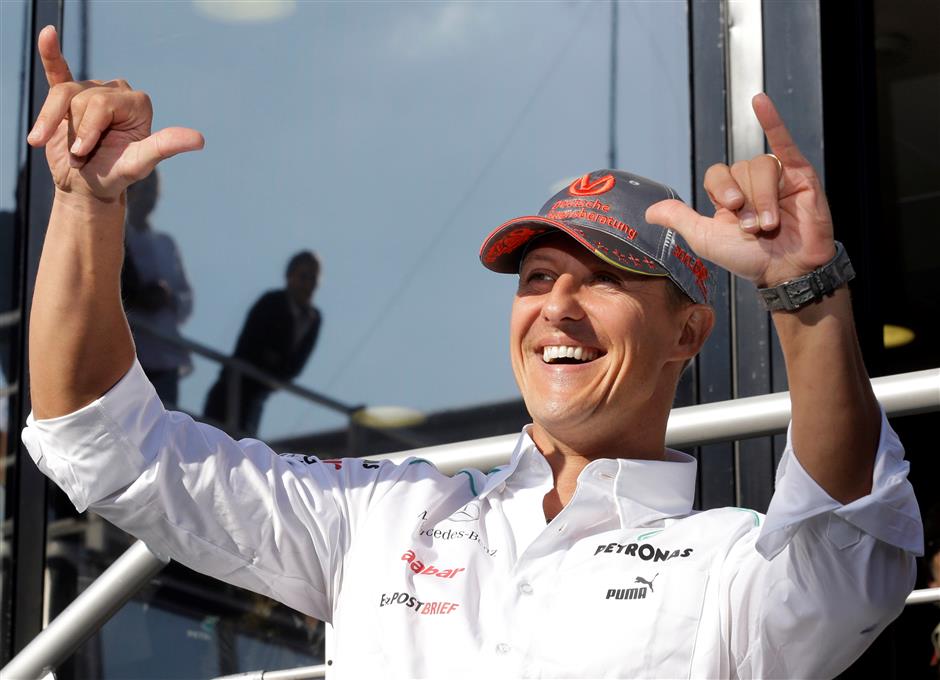 Mercedes Formula One driver Michael Schumacher of Germany celebrates in the paddock after the qualifying session ahead the Belgium Grand Prix in Spa-Francorchamps circuit in this September 1, 2012, photo.

Seven-time Formula One champion Michael Schumacher has been admitted to a Paris hospital to be treated on Tuesday with cutting-edge stem-cell therapy, according to a French newspaper.

The Paris hospitals authority, citing France's strict medical privacy rules, said it could not comment on the report in Le Parisien that Schumacher was admitted under tight guard on Monday to the Georges-Pompidou hospital for transfusions of inflammation-reducing stem cells.

The newspaper said the 50-year-old German, who suffered a near-fatal brain injury in a 2013 skiing accident in the French Alps, was expected to be discharged on Wednesday.

Following the accident, Schumacher's condition stabilized after he was placed in a drug-induced coma, from which he later emerged. Since September 2014, he has been cared for at home on the shores of Lake Geneva.

Le Parisien, citing sources it did not name, said Schumacher has been treated at least twice previously at the Georges-Pompidou hospital, admitted each time under a false name and treated by a small medical team, overseen by surgeon Philippe Menasche, described as a 'pioneer in cell surgery against heart failure'.

Le Parisien published a photo of a yellow and blue ambulance with Geneva plates that it said drove Schumacher to the hospital on Monday afternoon. Inside, he was taken to a first-floor cardiovascular unit on a gurney with a dark-blue covering that hid his face and body.

The paper said about 10 security agents, some equipped with earphones, watched over the patient.

He hit the right side of his head on a rock, splitting open his helmet. Doctors worked frantically to remove blood clots from his brain, but some were left because they were too deeply embedded.

It has been suggested by old friends he is unable to walk or properly communicate.

Schumacher won his first world title 25 years ago and had won his first Grand Prix back in 1992. His glory years were spent at Benetton and Ferrari, for whom he won the last of his 91 GP victories in Shanghai in 2006.

He came out of retirement in 2010 for a three-year stint with Mercedes.

Fans revere the determined German and his name was chanted at the Monza circuit last weekend, where Ferrari driver Charles Leclerc won the home race — the Italian team's first win at Monza since 2010.  Schumacher is Ferrari's most successful F1 driver and his son Mick is part of the Ferrari Driver Academy.