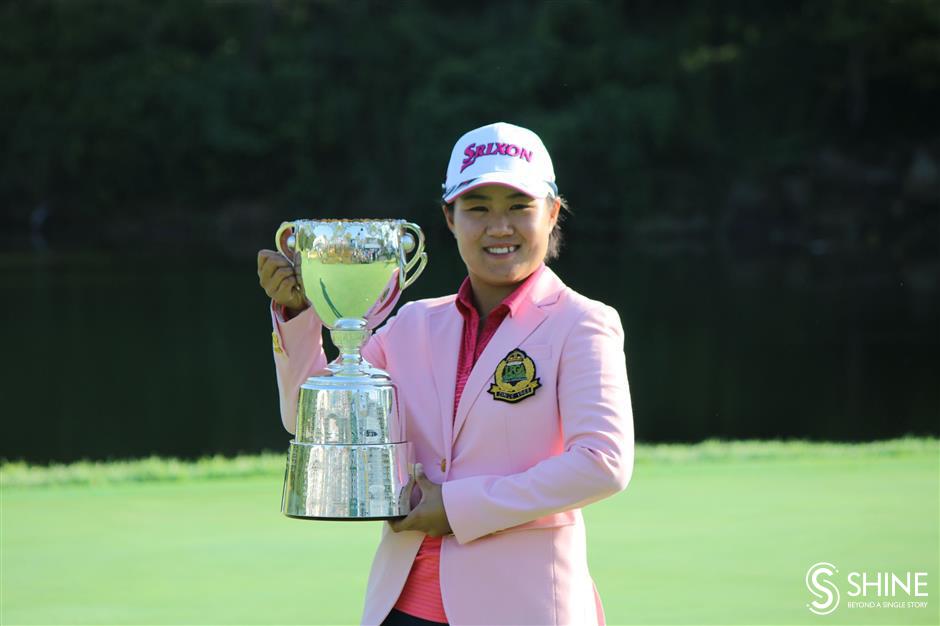 Japan's Nasa Hataoka poses with the trophy after winning the the 52nd LPGA Championship Konica Minolta Cup in Kobe, Japan, on Sunday.

Japan’s Nasa Hataoka stormed to a commanding eight-shot victory by closing with a final-round 5-under-par 67 to win the 52nd LPGA Championship Konica Minolta Cup on Sunday.

Victory for Hataoka was especially sweet as it was her fifth and third major win on the Ladies Professional Golfers’ Association of Japan and allowed the world No. 9 to celebrate her success in front of her adoring fans on home soil at the Cherry Hills Golf Club in Kobe.

The late charge by Feng Shanshan did not materialize as the Chinese star signed off with an even-par 72 to share second place with Japan’s Aoi Ohnishi.

Hataoka held an overnight two-shot advantage but quickly extended her advantage with two opening birdies before adding another on the par-4 eighth. She dropped a shot on the ninth hole but responded with another birdie on 12.

The Japanese bogeyed 14 but raced towards a grandstand finish by signing off an eagle on 15 followed by a birdie on 18 for a winning total of 18-under-par 270.

“I can finally heave a sigh of relief now. That eagle on 15 helped me calm the nerves and I tried not to make any mistakes on 17 and 18 because of the water hazard," Hataoka said.

“The pin positions were tough and I’m so happy I managed to win this championship.”

Feng, the former world No. 1, was full of praise for Hataoka and believes it would not be long before the Japanese reaches the summit of the world rankings, too.

“Nasa did not have any weak point all week. If she keeps playing like this, she will become the world No. 1 soon. She’s among the group of young players doing so well and this is good for the future of golf here, especially with the Olympics coming up next year,” said the Chinese.

“I was not able to hold some putts the last few days. The second round was a little bit of everything. Yesterday and today I hit the ball good, hit fairways and greens but I could not make any putts. But finishing top-10 overall is satisfying and I really had fun here in Japan,” said Park.