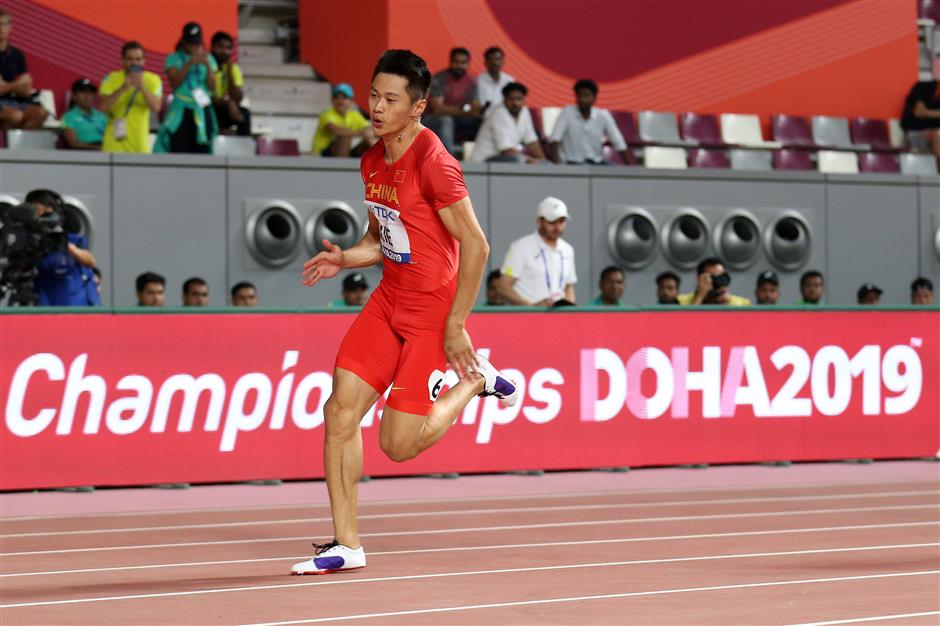 Xie advanced as the third fastest runner in the semifinals, finishing in 20.03 seconds to become the first Chinese man ever to qualify for the 200m final at the world championships.

"Yes, I created some history. I did my best today and I am in a bliss and proud of myself," said the 26-year-old Xie who had set the Asian record of 19.88 in July's Diamond League London leg.

In the final, Xie will be up against American Noah Lyles who won three Diamond League titles in this event in 2019 and Doha worlds 100m bronze medalist Andre De Grasse of Canada.

Lasitskene was in a class of her own to win at 2.04m when she cleared each height all at just first attempt. She then tried to challenge the height of 2.08 but failed.

Yaroslava Mahuchikh of Ukraine also cleared 2.04 on her third attempt to set an U20 world record and took silver and Vashti Cunningham of the United States came third in 2.00.

Host Qatar had its first medal at Doha world championships when home sensation and Asian champion Abderrahman Samba ran 48.03 to bag a bronze in men's 400m hurdles where Norway's Karsten Warholm defended his title in 47.42. Rai Benjamin of the United States was runner-up in 47.66.

Uganda took its first gold medal in Doha as All-African bronze medalist Halimah Nakaayi stormed to win the women's 800m in 1:58.04. Raevyn Rogers of the United States took silver in 1:58.18 and her teammate Ajee Wilson was third in 1:58.84.