Stars to line up on new-look Qizhong

The world’s best male tennis players once again gather in the lively metropolis for what is sure to be another thrilling Rolex Shanghai Masters event from October 5 to 13.

The stars’ return will be boosted by a revamped facility under improved playing conditions after a five-month renovation project at the Qizhong Tennis Center.

This year’s lineup again features the world’s top three of Novak Djokovic, Rafael Nadal and Roger Federer. All three players enjoy a solid fan base in Shanghai and China. They are joined by Andy Murray, who has been granted a wildcard by the Shanghai event, the only ATP 1000 tournament in Asia.

The 2017 final between Federer and Nadal — the players’ 38th clash — still remains fresh in the memory of Shanghai tennis fans.

World No. 1 Djokovic never hides his affection for tournaments in China, where he always manages to achieve good results. The Serbian has been crowned four times at Rolex Shanghai Masters in 2012, 2013, 2015 and 2018, and is looking forward to defending his title this year.

Murray is also no stranger to Shanghai, lifting the trophy on three occasions in 2010, 2011 and 2016. The former world No. 1, and three-time major winner with two Olympic gold medals, received a wildcard one month ahead of this year’s tournament.

“We are delighted to have Andy return to the tournament where he has been so successful,” said tournament director Michael Luevano.

“He is incredibly popular with our fans and we are all thrilled to see him back on the courts.” 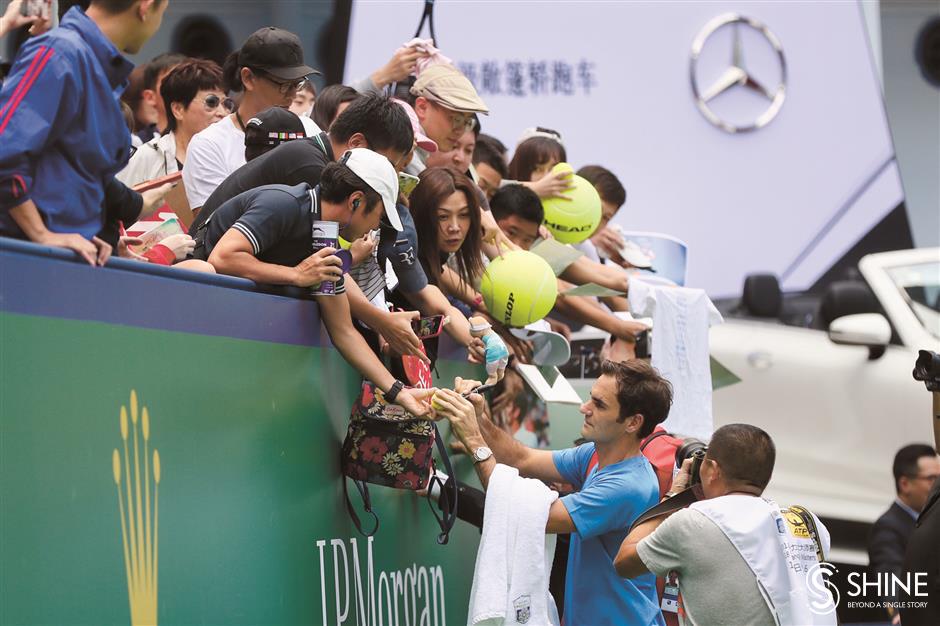 Roger Federer, who enjoys a huge fan base in Shanghai, signs for his fans during last year’s Rolex Shanghai Masters.

“He has been through a lot physically in recent times, so to see him back doing what he loves is very rewarding for everyone in tennis,” added Luevano.

Injury robbed Murray of a return to Shanghai after being crowned in 2016.

“I’m really looking forward to going back to Shanghai, a tournament I have had success at in the past,” said Murray, who, in 2010, became the tournament’s youngest-ever champion, at the age of 23 years, five months and two days, after beating Federer in the event’s shortest final.

Local player and three-time National Games champion Wu Di won himself a wildcard entry into the Rolex Shanghai Masters after finishing runner-up at the Shanghai Challenger tournament last month. He beat third-seeded Yuichi Sugita in the semifinal before losing to another Japanese player Yasutaka Uchiyama in the final.

The 28-year-old, however, has not been in his best form in the past 18 months, and failed to make China’s Davis Cup squad. It was the first time in 10 years  Wu missed the tournament.

Wu’s world ranking was 339 at the end of September, while his personal best of 140 was over three years ago. It was a record among all Chinese mainland male players.

Wu said his plantar fasciitis (inflamed heel tissue) had affected his training for over a year. The instability of his coaching team was also a factor.

“The good news is that the coach problem has been settled. Now the new coach can follow me around and keep giving me pressure,” said Wu.

Wu’s new coach, Mojmir Mihal, is from Slovakia. He used to be the instructor of Djokovic’s coach Marian Vajda.

“He is of a traditional style, a strict coach who sticks to a plan once it’s made,” said Wu.

“I can conquer (the difficulties) because I know I need a strict coach to keep pushing the best out of me.

“He is 65 and still keeps a high spirit every day, which encourages me. It makes him angry if I ever hold back in training.”

Wu said he might not be able to have a career as long as Federer’s or Nadal’s, but still hopes to return to his personal best.

“It shall be no problem for me to play for another three or four years as long as I stay healthy, Wu said.

“Reaching the top 100 in world ranking might be too ambitious a goal, but to reach my personal best of No. 140 again or even go higher, I’m quite confident about that.” 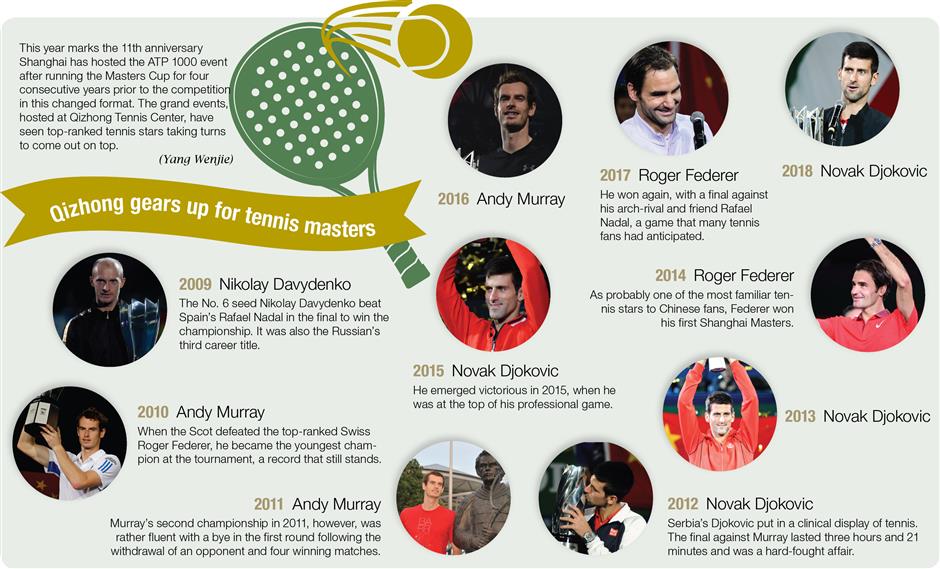 Last year marked the 10th anniversary of the ATP 1000 tournament in Shanghai.

Coming up to the competition’s 11th year, the Qizhong Tennis Center has upgraded its player area and given it a new look. All locker rooms, restaurants, gyms and VIP rooms for the top singles players have been repainted. All wooden flooring and carpets, as well as bathroom facilities, have been replaced with new ones.

New construction material has been used, as well as decorative elements highlighting the ATP and the city of Shanghai.

“This is the largest revamp since Qizhong was put into use 14 years ago,” Zhang Yongping, vice director of local organizer Juss Event’s operative department, said. “After the first 10 years of Rolex Shanghai Masters, we wanted to give the tournament a new look at the beginning of a new decade.”

Zhang unveiled that they arranged a small surprise for Federer when decorating his bathroom.

“We designed a decoration on his shower room glass, which is in shape of his mother country Switzerland, as well as Shanghai’s skyline,” Zhang said.

Apart from changes to the players’ area, seven of the 22 playing courts at Qizhong were also refurbished. The court surface has been polished to stabilize friction condition. The painting used for the court surface is the same as that used for US Open courts.

As for tickets, the organizers introduced new ticket-vending mechanism this year by separating the day and night sessions to meet fans’ demand and make full use of the venue’s capacity.

“Day ticket” and “night ticket” for center court matches are on offer from October 7 to 11, which are workdays. Fans can make a purchase according to their timetable. Those who can only go to the center after work can buy a “night ticket” at a cheaper price than a ticket for a whole day’s matches.

According to Zhang, seven out of the nine ATP 1000 tournaments around the world have already applied for the day and night ticket-vending mechanism. Shanghai won’t lag behind though the mechanism is more demanding for security and venue management. Other ticket promotions and discounts, including family tickets, are also available.