For the first time in history, the World Athletics Championships spanned almost the entirety of China's National Day holiday.

More coincidentally, the year 2019 is the 70th anniversary of the founding of the People's Republic of China, which gave added meaning to the Chinese delegation's quest in Doha.

And the Chinese legion celebrated the holiday in style -- staging the country's best performance at the 10-day world championships in 20 years with three gold, three silver and three bronze medals.

"The race had a special meaning for me because it was held just before China's National Day," said former world record holder Liang Rui, who led a one-two finish for China in the women's 50-kilometer race walk.

"This victory is a birthday gift from me for my homeland," she said after finishing the race at dawn on September 29. 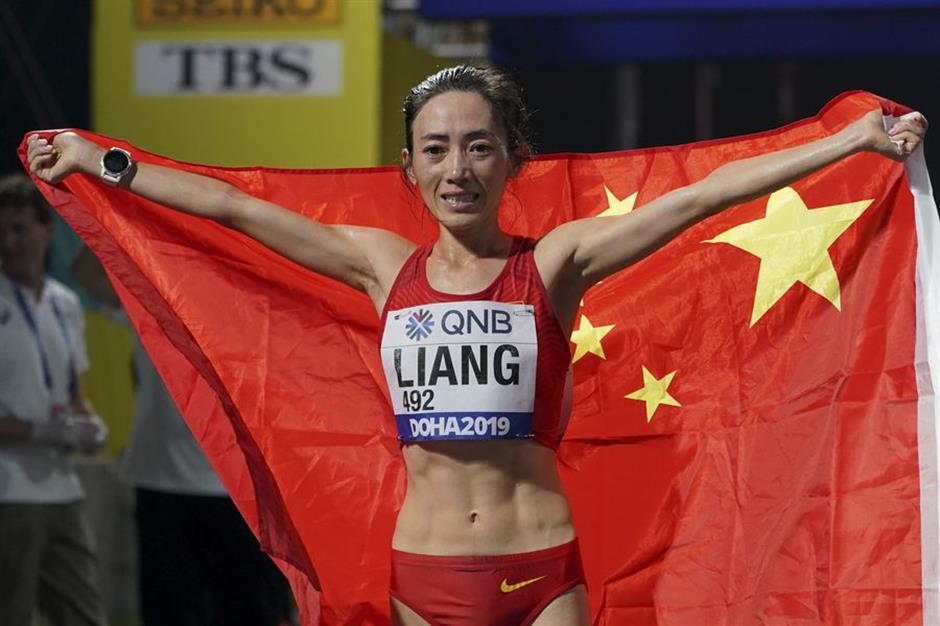 At the same time, many Chinese back home were busy preparing for a huge nationwide celebration on October 1 in a festival atmosphere similar to that of the traditional Chinese Lunar New Year.

One day later, when China was counting down to a grand military parade and mass pageantry at Beijing's iconic Tian'anmen square, Olympic gold medalist Liu Hong and her teammates Qieyang Shijie and Yang Liujing swept the 20km race walk podium in Doha.

"Even before we came here, the team was confident of retaining the 20km title before the National Day, and the only question was who would win it. Every one of us wanted to win the gold medal, to pay tribute to our country," said 32-year old Liu, who returned to action in early 2019 after more than two years of maternity leave.

"This is the third time I have won at the World Championships. I am very pleased that I won this time because tomorrow will be the 70th anniversary of the founding of the People's Republic of China. Winning all three medals, this achievement is our gift to our motherland," she said. 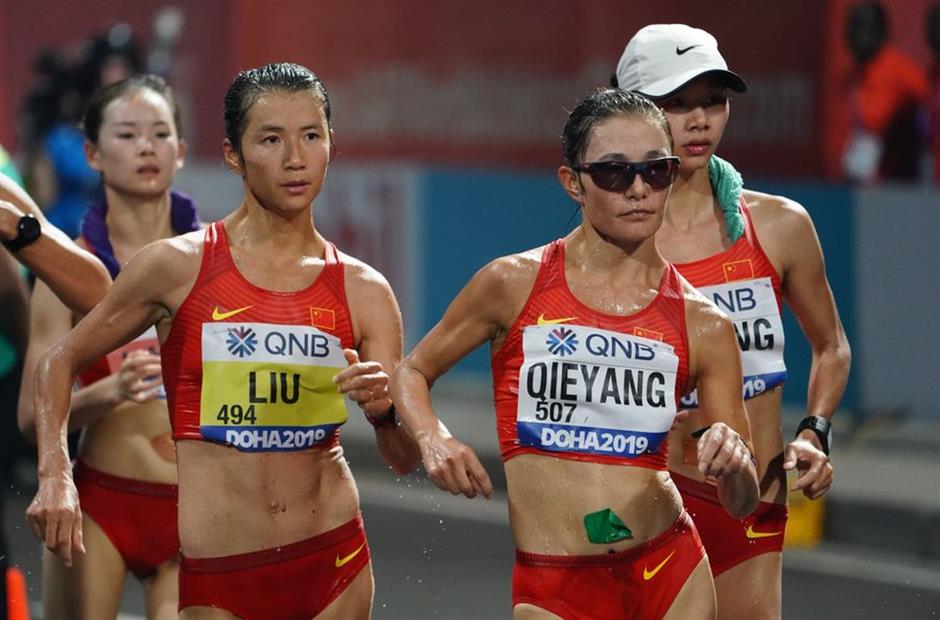 Hours before first light was shed on a sleepless Beijing on October 1, Xie Zhenye had written a piece of athletics history when he became the first Chinese man ever to qualify for the 200m final at the world championships.

"Yes, I created some history. I did my best today and I am proud of myself, especially on this day," said the 26-year-old, who qualified as the third fastest runner in the 200m semifinals.

Xie eventually finished seventh in the final on Tuesday night, when 6,000km away China was deep in sleep after the National Day culminated in spectacular firework displays in the heart of the capital city.

The Asian record holder said he took valuable experience from Doha, and already has his sights set on next year's Tokyo Olympic Games.

"I believe I have gone through the most difficult process, running in the strongest heat group and in the inside lane in the final. I took this as a test and a learning opportunity for next year's Olympics," he said.

"Everyone in the team was trying to keep it steady this year because our bigger goal is Tokyo." 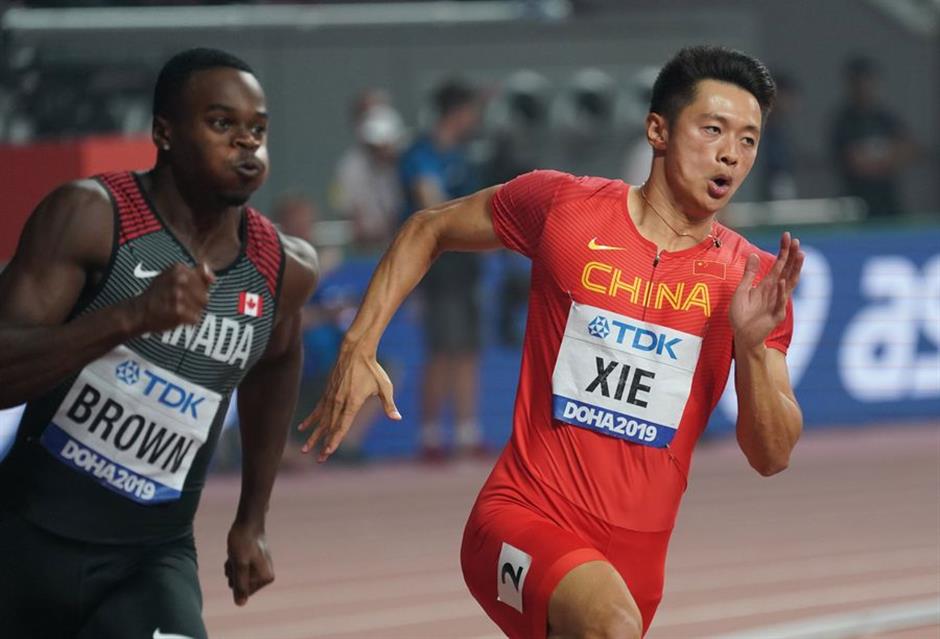 As the National Day celebrations drew to a close, many Chinese people began to enjoy their holiday by traveling around the country. In the first four days of the seven-day holiday, the country received a total of 542 million domestic tourists and recorded 452.63 billion yuan (63.6 billion U.S. dollars) in domestic tourism revenue.

Many people also elected to stay at home and relax, allowing them to watch the world championships and hear more good news from Doha.

Defending champion Gong Lijiao, competing in her seventh world championships, retained her shot put title on October 3. The 30-year-old held off a strong challenge from Jamaica's Danniel Thomas-Dodd and produced four throws over 19m, grabbing the gold with a throw of 19.55m in the fourth round.

Despite her win, Gong was unsatisfied with her performance and promised to do better in Tokyo.

"I'm so happy to win but the result was well below my expectations," said Gong, whose personal best is 20.43m.

"I worked out too much in the warm-up before the final and was dripping with sweat. So when the competition started, I felt like I was losing all my momentum, and the air conditioning in the stadium worked against me too," she explained.

"This is a lesson for me and I will pay more attention to these details in Tokyo. My dream is obviously to win the title then," said Gong, who already has a silver and a bronze from the Olympic Games. 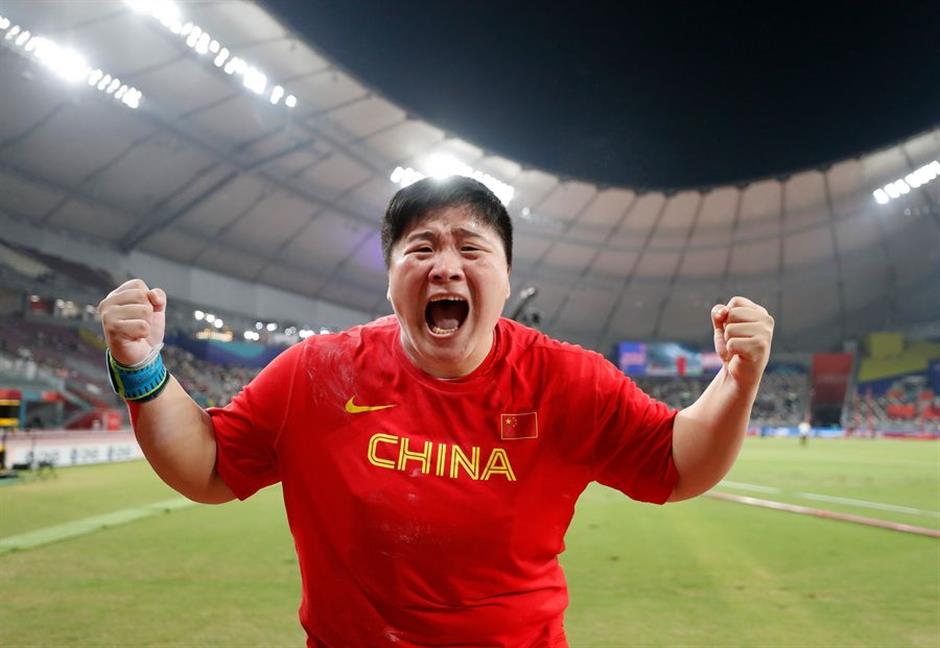 Liu Shiying and Lyu Huihui also brought home a silver and a bronze medal respectively in women's javelin, although the color of the medal was not the right one for Lyu, a clear favorite before the world championships with a four-month winning streak across 12 competitions.

"I have already competed at two world championships before, winning a silver and a bronze, and I really wanted a gold this time," she said.

Little did she know that the Chinese team's achievements in Doha had already made their compatriots proud.

The scene could well have reminded her of her days as an athlete, when she raced to the 1,000m speed skating title in Sochi in 2014, becoming the first Chinese Olympic champion in this event.

"I was so proud when I heard the national anthem on October 1. Those athletes who saw the national flags raised in the competition are the best," said the current International Olympic Committee (IOC) member. 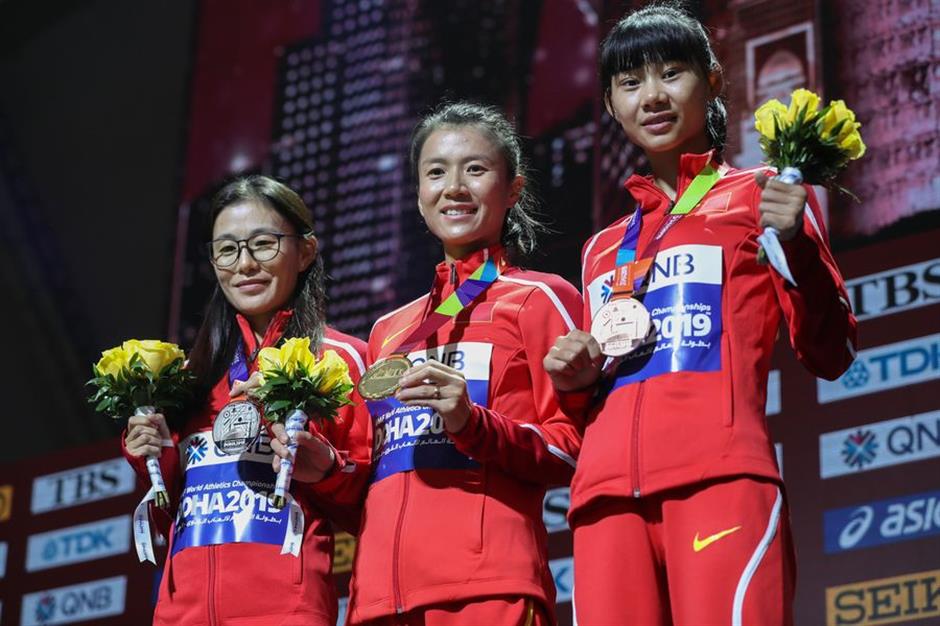 Zhang retired after the 2018 Winter Olympics and was elected to the Athlete's Commission of the IOC. During her visit to Doha as a representative of the IOC, Zhang was informed that she was appointed to the Future Host Commission, which will explore, monitor and encourage interest in future Olympic Games, Olympic Winter Games and Youth Olympic Games.

After joining the IOC, Zhang said she could see her country from another perspective.

"After I became an IOC member, I came to know more about athletes from other countries and regions. I didn't know how well we Chinese athletes are taken care of until I spoke to others," she said.

Zhang's career path could set an example for other Chinese athletes, as China's top sprinter Su Bingtian was nominated as one of the 15 candidates for the six available seats in the IAAF Athletes' Commission.

"I met him in Doha the other day and gave him my encouragement. I hope he can be elected," Zhang said.