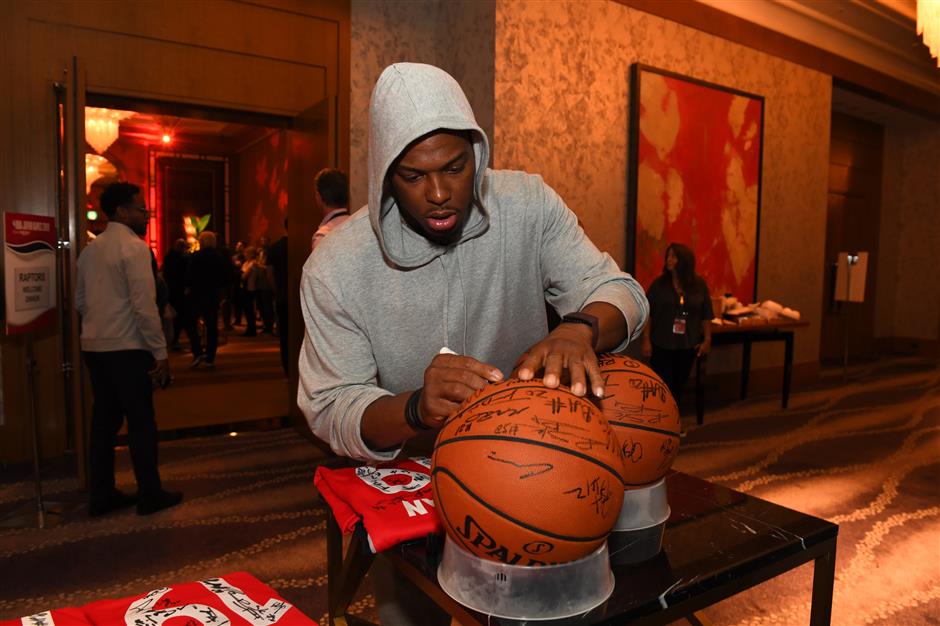 Kyle Lowry of the Toronto Raptors signs some basketballs as part of the 2019 NBA Japan Games, at the Grand Hyatt Hotel in Tokyo on Sunday.

Kyle Lowry and the Toronto Raptors have agreed on a US$31-million, one-year extension that could keep him with the National Basketball Association champions through the 2020-21 season.

Agent Mark Bartelstein on Monday confirmed the agreement, which was first reported by ESPN. Lowry and the Raptors had been talking for some time about this, so the extension was not unexpected.

The star guard was entering the final year of a US$100-million, three-year deal. But now he'll bypass free agency next summer, and the short-term deal helps the Raptors keep the flexibility many teams will want going into what's likely to be a massive free-agent summer of 2021.

Lowry is entering his 14th NBA season and his eighth with the Raptors, making him the longest-tenured player on the roster. He's been an All-Star the last five seasons. He averaged 14.2 points and a career-best 8.7 assists last season while helping Toronto win its first NBA title.

Lowry said last month that winning one championship has whetted his appetite for another.

"I'm motivated even more than ever now," he said. "When you get a taste of it, you always want it."

He has been gratified by the Raptors' success.

"I've been through the ups and downs," he said. "I was able to help bring a championship here, from the time when they were talking about tanking for certain players. I'm not saying I'm the sole reason but I feel like I have a big part of it."

Lowry has been dealing with the after-effects of offseason thumb surgery. It kept him from playing for USA Basketball at this summer's FIBA World Cup in China, and he isn't playing in the Raptors' preseason games this week in Japan against the Houston Rockets.

But at media day last month, Lowry suggested he'll be ready for the regular season. The Raptors get their championship rings on October 22 before facing the New Orleans Pelicans in the opener.

"I'm going to slow-roll it and make sure I'm fully ready to go when it's time to go," Lowry said.