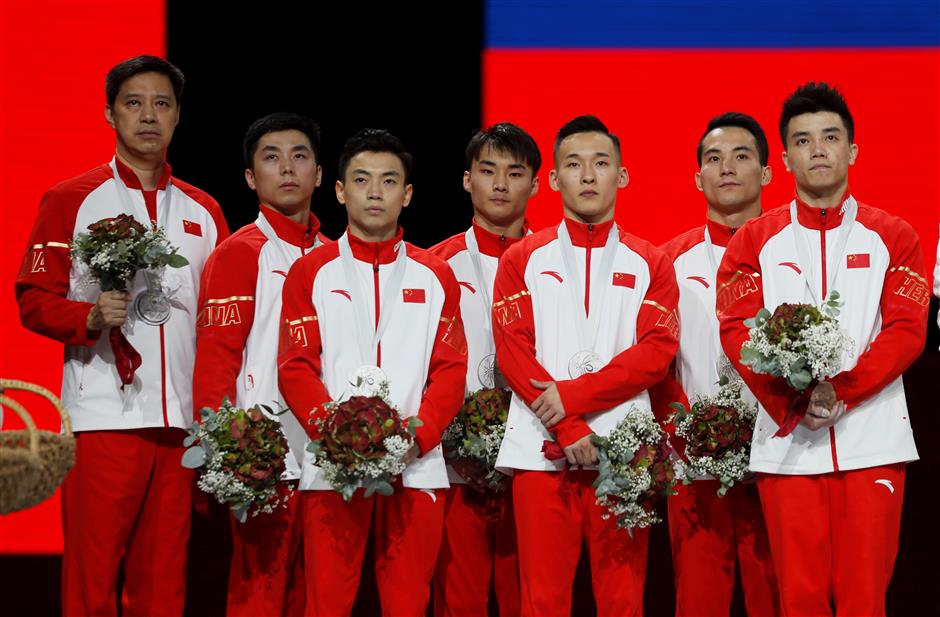 Members of silver medalist team China posed on the podium at the gymnastics world championships in Stuttgart, Germany, on Wednesday.

Russia grabbed the men's all-around team gold at the gymnastics world championships in Stuttgart after China's Sun Wei fell off the high bars in the closing routines on Wednesday.

Japan was third, just over 2.5 behind China but more than 3.5 ahead of the United States. Great Britain was fifth.

It was Russia's first world team title, although the Soviet Union collected the last of its eight golds in 1991.

Less than a year before the Tokyo Olympics, Russia also took revenge for a narrow defeat at last year's worlds in Doha, Qatar, when China won by 0.049 of a point.

China, Russia and Japan had exchanged the lead as the teams rotated through the six different elements.

China seemed to have seized control on its penultimate challenge, the parallel bars.

Its third and final man on the apparatus, Zou Jingyuan, delivered an imaginative and technically perfect routine to score a huge 16.383 points, by far the highest mark by any man in any discipline all afternoon. The second best was the 15.3 by Russian Nikita Nagornyy, also on the bars.

Zou's score also gave his team a total of 45.141 on the bars, the most by any of the eight finalists in any discipline.

That meant China led Russia by 1.4 points going into the last routine, when the two nations met at the high bars for a final showdown.

Japan, meanwhile, finished with the floor exercises and a series of errors ended its chances of finishing in the top two.

As China went first, Sun immediately handed the initiative back to Russia as he slid off the bar to finish with just 12.766.

Even though the last Chinese competitor Lin Chaopan scored 14.5, the final Russian Nagornyy held his nerve and scored 14.46.

As the top two teams embraced, Sun turned away and covered his face with his hands. 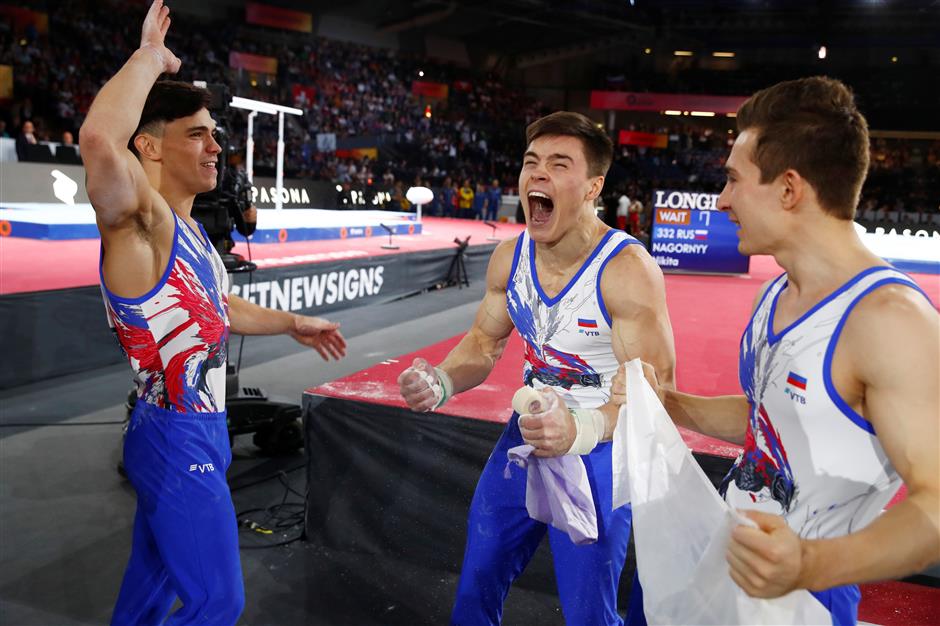 Russia's Nikita Nagornyy (center) and teammates celebrate after winning the world men's all-around team title at the Hanns-Martin-Schleyer-Halle in Stuttgart on Wednesday.