Djokovic says pressure to stay No. 1 'a privilege' 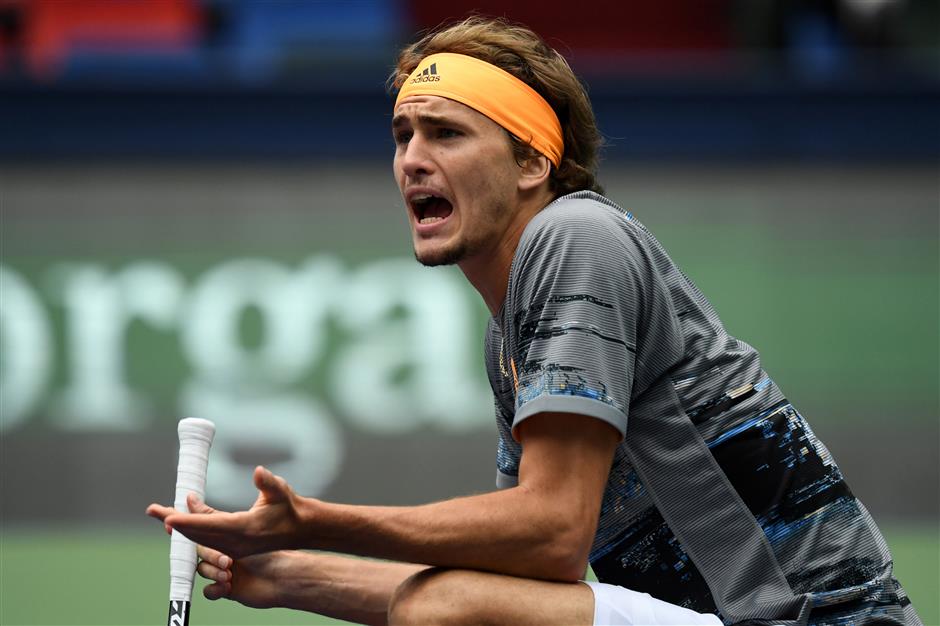 Alexander Zverev of Germany reacts during his Rolex Shanghai Masters second-round match against Jeremy Chardy of France at the Qizhong Tennis Center in suburban Minhang District on Wednesday. The fifth seed won 7-6 (13), 7-6 (3).

Novak Djokovic said on Wednesday that he was "embracing" the pressure of being world No. 1 and reigning champion at the Rolex Shanghai Masters this week.

The 32-year-old from Serbia made a fast start to his title defense, easing past young Canadian Denis Shapovalov 6-3, 6-3 with minimum fuss at the Qizhong Tennis Center in suburban Minhang District.

The 16-time Grand Slam champion said he had no pain from the shoulder injury that forced him out of the US Open last 16 and is "confident that I can perform at my best".

Djokovic said that sky-high expectations are "part of what we do".

"I think when you feel pressure you're doing well.

"It's something that is inevitable so you might as well embrace it and accept it.

Tsitsipas defeated the 19-year-old 7-6 (3), 7-6 (3) for his first victory over the Canadian stretching all the way back to their junior days.

The 21-year-old Tsitsipas, who plays Poland's Hubert Hurkacz in the last 16, said that he had always been behind Auger-Aliassime in his physical development — until now.

Standing 193 centimeters, the seventh-ranked Greek insists he is still not as strong as some on the ATP Tour.

"I think something that probably I'm trying to cover that deficiency that I have is not concentrate too much on my power and my strength and how hard I can hit," he said.

"Maybe play smarter and play more with my mind and not with my physical power."

Another of the new generation hoping to usurp the likes of Djokovic and Roger Federer is the 22-year-old Alexander Zverev.

The young German had a bout of dizziness during an incident-packed victory over French underdog Jeremy Chardy, 7-6 (13), 7-6 (3).

Zverev apologized to a television cameraman after he accidentally hit a ball square into his jaw in winning a point.

Zverev was also seen by a doctor in the first set and in another colorful moment he smashed his racquet on the floor during the mammoth first-set tie break.

The second-set tie break had a lighter moment — Zverev losing his grip while hitting a shot, his racquet flying into the crowd.

"It was definitely interesting," smiled Zverev, who plays Russia's Andrey Rublev next.