Five birdies over the first six holes proved the difference for Aunchisa Utama on Thursday as the Thai veteran carded a 6-under 66 to take a one-stroke lead after the first round of the Mitsubishi Heavy Industries Orient Masters.

Chinese amateurs An Tong, a 13-year-old from Tianjin, and Fan Shuangshuang, a 14-year-old from Chongqing, were two shots off the pace on 68, tied for equal fifth with compatriots Yang Taoli and Sui Xiang and Malaysian Aretha Pan.

Aunchisa, who has played regularly on the CLPGA Tour since 2012 and never finished higher than equal fifth, came out blazing with three straight birdies to start her round. The 28-year-old picked up further strokes at holes five and six before registering a bogey five at the 370-yard seventh hole. On the back nine she made birdie at holes 12 and 13 before closing with a string of pars.

“I got lucky on two holes. On the sixth hole I made a long putt of about 10 yards, while the first hole was about five yards. On the back nine my two birdies were also about five or six yards. The putter was working good,” the Lop Buri native said.

“I just changed to a new putter, an Odyssey. It was a putter my dad picked up about a month ago and gave it to me. It’s the first time I have used it in a tournament. Tomorrow, I just need to keep hitting on the fairway, on the green and keep up my putting.” 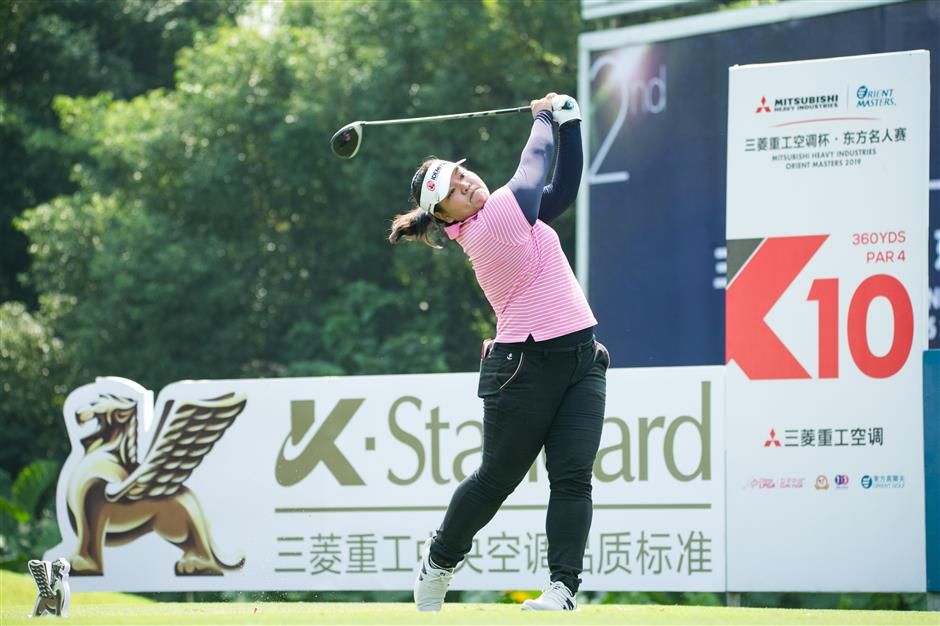 Thailand's Aunchisa Utama hits her tee shot on the 10th hole during the first round of the Mitsubishi Heavy Industries Orient Masters in Xiamen, southeast China's Fujian Province, on Thursday.

Tokyo native Ami carded five birdies over the first 10 holes. After taking a double-bogey six at the 350-yard 15th she rebounded for an eagle three at the 456-yard 17th hole.

“It was a good day. Long game was good. I hit it very close and made some short birdies. The only lapse was on the 15th hole. I drove into the right rough and could swing against the tree. I also made three-putts over there. But I bounced back and for a three-foot eagle putt with five-wood from 200 yards (at the 17th).”

Yang, the first CLPGA Tour Order of Merit winner in 2009, appeared to be rolling back the clock to her old form when she got to 5-under through 12 holes. She then struggled to a bogey six at the next and could only muster par golf back to the clubhouse.

The Sichuan native lamented she was battling tendinitis in her left wrist and still wasn’t 100 per cent health-wise.

“I played great from tee to green over the first 12 holes. But I hit a really bad shot off the tee at the 13th hole and made a bogey. After that, I seem to hit everywhere and had no good rhythm. But you cannot complain about a 68. It’s my first time being in the sixties for a long time.”

Jackie Chulya (70) made a double eagle two at the 17th hole when the veteran Thai’s second shot found the hole from 225 yards out with a three-wood. “I really didn’t expect that to happen. It’s my first time getting an albatross either in practice or in a tournament,” she said.